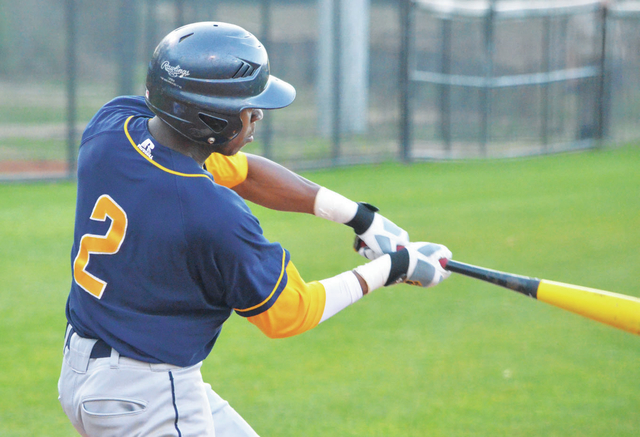 LaGrange High’s Matthew Anderson did some nice damage control during his three innings on the mound. Kevin Eckleberry | Daily News

http://lagrangenews.com/wp-content/uploads/sites/37/2016/03/web1_baseball29.jpgLaGrange High’s Matthew Anderson did some nice damage control during his three innings on the mound. Kevin Eckleberry | Daily News

Troup’s Ryan Bliss had a base hit during Tuesday’s game, and he had an outstanding defensive performance. Kevin Eckleberry | Daily News

http://lagrangenews.com/wp-content/uploads/sites/37/2016/03/web1_baseball14.jpgTroup’s Ryan Bliss had a base hit during Tuesday’s game, and he had an outstanding defensive performance. Kevin Eckleberry | Daily News

LAGRANGE – It was all about damage control.

During his final two innings on the mound during Tuesday’s game against Troup, LaGrange High’s Matthew Anderson was in all sorts of trouble.

Troup had a runner on third base with one or fewer outs in the sixth and seventh innings, but it was unable to score a run on either occasion.

Anderson ended up throwing three scoreless innings to help keep the Grangers within shouting distance of the Tigers, although they ended up losing 5-1.

LaGrange head coach David Smart said Anderson has been terrific this season pitching with men on base.

“He’s done a good job of that for us,” Smart said. “He just doesn’t give in. He keeps competing.”

In the sixth inning, Colby Darda led off with a double, and pinch-runner Camren Russell moved to third on a Jarred Helton sacrifice bunt.

Anderson hung tough, and he got a groundout and a strikeout to get out of trouble.

In the seventh inning, Anderson found himself in an even more precarious position with a runner on third with no outs.

Bo Halcomb led off with a single, and he moved to second on a balk before stealing third.

A strikeout, a popout, and a long flyball off the bat of Miles Cameron allowed Anderson to once again exit an inning with no runs scoring.

DEFENSIVE PROWESS: It’s a comforting thought for a pitcher, knowing he’s got a shortstop as capable as Ryan Bliss playing behind him.

Bliss, a sophomore who verbally committed to Auburn earlier this year, is the anchor of the infield defense, and he showed why he’s so highly regarded during Tuesday’s game.

In the second inning, Blissed jumped high into the air to steal a base hit from Willis Kemp.

In the sixth inning, LaGrange was threatening with the bases loaded and one out when Bliss came through with another gem.

Matthew Anderson hit a line drive that was caught by second baseman Bo Halcomb, who flipped the ball to Bliss for the double play.

It wasn’t an easy play.

Bliss reached behind him to make the catch, and he had to make sure his foot hit the bag as well.

Then in the seventh inning, LaGrange had a runner on first and no outs when Bliss fielded a ball, raced to second for the force out, and then whipped a throw to first for the double play.

Troup senior pitcher Winston Turner, who worked six innings in Tuesday’s game, is glad to have Bliss on his side.

“I watch him every day in practice,” Turner said. “I just trust him more day after day.”

Bliss can also get it done with a bat in his hand.

Bliss had a leadoff single in the fourth inning that jump-started a five-run rally.

POWER STROKE: There were two home runs hit during Tuesday’s game, and they were both no-doubters.

In the second inning, LaGrange’s Larkin Easterwood hammered a ball over the center-field fence for his third home run of the season.

Tuesday’s other home run came from Troup’s Miles Cameron, and it was a big one.

With his team trailing 1-0 in the fourth inning, Cameron blasted the ball the opposite way over the right-field fence for a three-run home run.

With two outs in the top of the seventh, Cameron hit the ball on the nose to deep right field, but it was caught.

“His last at-bat was just as impressive,” Troup head coach Craig Garner said. “That was a laser to straight-away right field.”

USING THE BUNT: Under Garner, the bunt is a big part of Troup’s offensive arsenal, and that was the case during Tuesday’s game.

Troup had two bunt singles that contributed greatly to the five-run fourth inning.

After Cameron’s home run, the next batter up was catcher Brandon Gray, and he reached on a bunt single to start a rally.

Two batters later, Colby Bridwell had another bunt single, and Troup scored a run on an error.