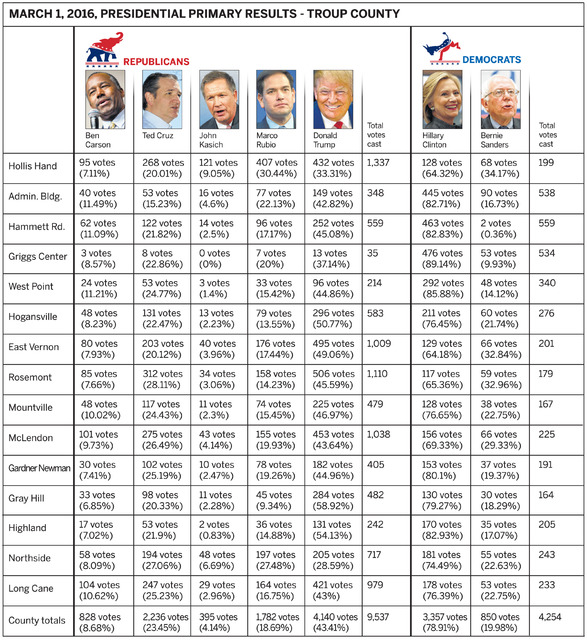 Trump’s highest vote count came from the Rosemont precinct, where 506 votes — 45.59 percent — were cast for him.

Clinton’s victory over Sanders hinged on turning out the state’s large black population, which is a historically Democratic voting bloc. About 4 in 10 voters in Georgia’s Democratic primary were African-American, and about 8 in 10 of them favored Clinton. That mirrors her strong showing among black voters in South Carolina over the weekend and in other Southern states Tuesday.

Trump received support from nearly half of GOP voters who described themselves as moderate and also won over about 4 in 10 voters who described themselves as evangelical. About 6 in 10 Republicans who said they wanted an outsider to be the next president went for Trump. Joining them Tuesday at a library in Atlanta’s well-off Buckhead neighborhood was Ty McCain, who characterized his vote for Donald Trump as an “anti-establishment” choice.

McCain said he admired Trump’s early “self-funded” approach to the campaign. Trump initially made a personal loan to his campaign and later began accepting contributions.

“All these other guys are giving lip service to change,” said McCain, a 47-year-old attorney. “Trump is putting his money where his mouth is.”

Jefferson McConkey called himself a “50-50” participant in presidential primaries but cast a ballot for Trump on Tuesday at the same polling place. McConkey, a real estate developer, said he’s willing to give Trump a break for previous statements on social issues like abortion that are out of step with some Republican voters.

Incomplete results showed Trump had received about 40 percent of the statewide vote while U.S. Sens. Marco Rubio and Ted Cruz fought for second place. Both candidates ramped up their attacks against Trump in recent days ahead of the GOP contests in 11 states Tuesday.

Hillary Clinton received about 71 percent of the statewide vote, based on incomplete returns. She also had strong support from women and young voters.

Andra Gillespie, a political science professor at Emory University in Atlanta, said the large African-American population in Georgia and other Southern states hasn’t loosened Republicans’ hold in general presidential elections. That situation only reverses in Democratic primaries, she said.

Elizabeth Black said she hoped the Super Tuesday states would help Hillary Clinton lock down the Democratic nomination soon so she can focus on November. Black, a 75-year-old retiree, said she’s worried Republican interest in the presidential race will swamp Democrats if Clinton gets a late start.

“We need someone who will beat Trump,” Black said after voting for Clinton at her polling place in Atlanta’s Buckhead neighborhood.

William Garcia, a 61-year-old who voted for Clinton at his Atlanta polling place, also looked ahead to the November election and said he’s concerned Sanders is “a little bit too radical.”

“(Clinton’s) platform is realistically more achievable,” he said. “Just look at how much President Obama has struggled with Congress.”