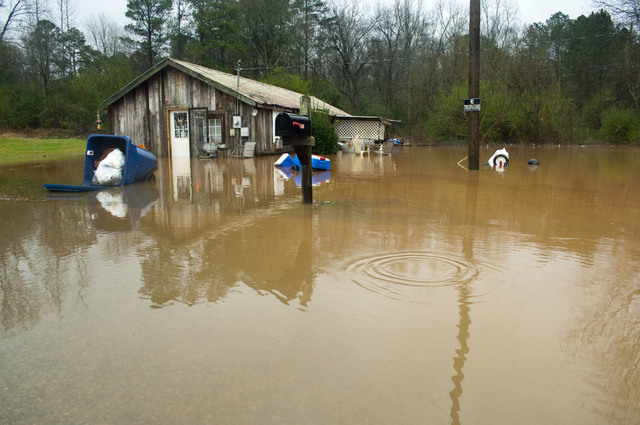 A home on Leathea Drive in LaGrange sits flooded Dec. 24 after heavy rainfall. A federal state of emergency in Troup County was declared by President Barack Obama on Saturday.

http://lagrangenews.com/wp-content/uploads/sites/37/2016/03/web1_Flooding02WEB.jpgA home on Leathea Drive in LaGrange sits flooded Dec. 24 after heavy rainfall. A federal state of emergency in Troup County was declared by President Barack Obama on Saturday.

The declaration paves the way for the Federal Emergency Management Agency to provide payment “of the eligible costs for repairing or replacing damaged public facilities,” according to a statement by FEMA.

The application procedures for state and local governments will be explained at a series of meetings with local officials, the FEMA statement said. Approved public repair projects would be paid through the state from funding provided by FEMA and other participating federal agencies.

Dennis Knight, chief of the Troup County Fire Department and the county’s emergency operations manager, said he has a meeting scheduled for Friday with FEMA officials to discuss what assistance might be provided.

“It’s extremely early in the process,” he said. “Hopefully after that meeting, I’ll have some more information.”

Troup and more than 30 other counties, including Meriwether, Harris and Carroll, are named in the federal disaster declaration.

In December, Gov. Nathan Deal made a disaster declaration that allowed state-level resources to aid in the county’s response and repair to the flooding.

As many as 40 people from 14 families were displaced by flooding, according the American Red Cross. County roads engineer James Emery has said as many as 38 roads were damaged or overrun with water during storms.

Emery said flooding caused at least $1.4 million in damage to roads in the unincorporated county with additional damage in LaGrange and Hogansville.