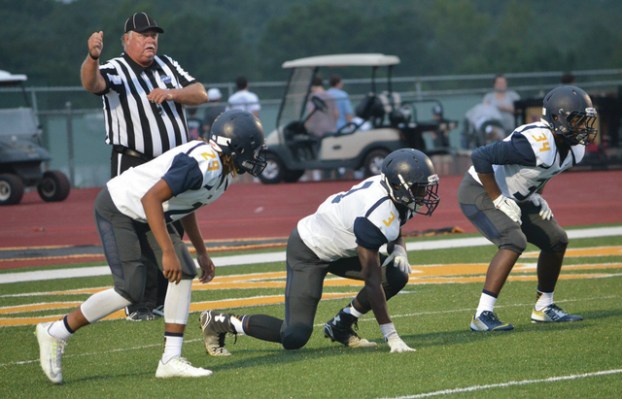 Freshman Colby Williams got the start on Wednesday, and he threw five scoreless innings before running into trouble in the sixth inning. Kevin Eckleberry | Daily News

http://lagrangenews.com/wp-content/uploads/sites/37/2016/03/web1_troup4.jpgFreshman Colby Williams got the start on Wednesday, and he threw five scoreless innings before running into trouble in the sixth inning. Kevin Eckleberry | Daily News

Troup’s Bo Halcomb had a triple in the first inning and he scored the game’s first run. Kevin Eckleberry | Daily News

http://lagrangenews.com/wp-content/uploads/sites/37/2016/03/web1_troup1.jpgTroup’s Bo Halcomb had a triple in the first inning and he scored the game’s first run. Kevin Eckleberry | Daily News

LAGRANGE – Freshman pitcher Colby Williams pitched a gem on Wednesday against East Coweta, but it wasn’t enough to keep the Troup Tigers from dropping their first game of the season.

The right-handed Williams got the start, and he pitched five scoreless innings before leaving the game with the bases loaded with no outs in the sixth inning.

East Coweta rallied for four runs in the sixth, and that was all it needed to claim the 4-3 victory.

The Tigers, who were coming off Tuesday’s 5-1 win over the rival LaGrange Grangers, fell to 3-1.

Troup coach Craig Garner was encouraged by the performance of Williams, who he believes will be a key part of the staff this season

“I’m very pleased. And that’s honestly no surprise to us,” Garner said. “We haven’t been able use him just yet. But we fully expect him to possibly be one of our top four pitchers. I think he’s only going to get better.”

Williams showed what he’s capable of early in the game.

With two runners on in the top of the first, Williams got back-to-back strikeouts to end that threat with no runs scoring.

Williams didn’t give up his first hit until the top of the fifth, and he’d yet to allow a run as the sixth inning began, and the Tigers were clinging to a 1-0 lead at that point.

With the bases full in the sixth, Payton Upchurch entered the game, and East Coweta took advantage of two walks and two errors to put a big inning together and take a 4-1 lead.

The Tigers scored two runs of their own in the bottom of the inning.

Miles Cameron had an RBI hit, and Brandon Gay drove in a run when he reached on a bunt single.

The Tigers were threatening to do a lot more damage, but a double play with the bases loaded ended the inning.

“They’re always going to be tough,” Garner said of the Indians. “You have to work to beat them. We just didn’t do our job tonight. When you give up those free bases, and make those mistakes, they’re going to beat you. They’re a quality team.”

Troup took the early lead with a run in the bottom of the first.

Bo Halcomb led off the inning by driving the ball over the right fielder’s head, and he made it all the way to third base for a triple.

The next batter, Ryan Bliss, grounded out to drive in Halcomb to give the Tigers a 1-0 lead, and that’s how it remained until the decisive sixth inning.

Troup will look to begin a new winning streak when it hosts Northside on Friday, with the game set to begin at 5:30 p.m.