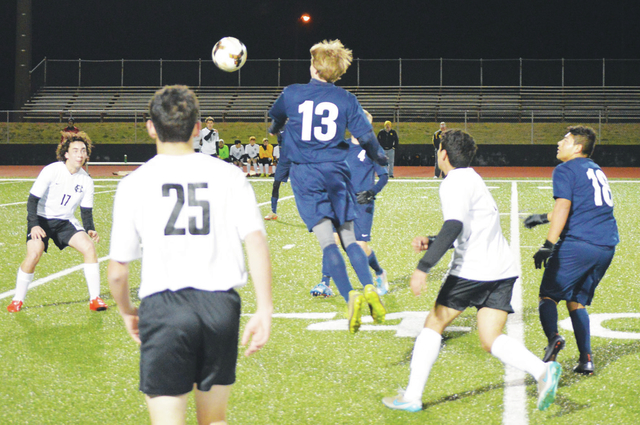 The Troup Tigers, who are off to a 3-1-1 start, will make their Region 5-AAAA debut today against Woodward Academy. Troup will be counting on veteran players Christian DeLeon, Thomas Trotter, Matt Moore, Alan Vazquez, Juan Herrera, Matthew Hale and Hoston Fannings to lead the way. Kevin Eckleberry | Daily News

LAGRANGE – As the Troup Tigers headed to their locker room at the half of last year’s home soccer match against Woodward Academy, they were feeling good.

Woodward Academy, an elite and highly-skilled team, was being pushed hard, and it was clinging to a 1-0 lead at the break.

Then the second half happened.

Woodward Academy scored early in the half to go up by two goals, and the dam broke.

Woodward Academy went on to claim a 10-0 victory in a game that ended because of the mercy rule.

Flash forward a year, and Troup and Woodward Academy are preparing to lock horns once again in the Region 5-AAAA opener for both teams.

Woodward Academy is again a power-house team that is expected to compete for a region championship, but Troup’s players have no intention of experiencing a repeat of last year’s debacle.

A year ago, Troup may not have been ready to compete with a team of Woodward Academy’s caliber, but this is a different season, and a much-improved team.

The Tigers, after fighting Opelika (Ala.) to a 1-1 tie on Tuesday, are 3-1-1 overall, and they also won their preseason game.

It’s a veteran team filled with players who have been competing alongside each other for years, and they’re ready to show what they can do against a powerful Woodward Academy team.

“Last year we played them, and they killed us. It was a mercy rule,” said junior Alan Vazquez, who headlines Troup’s defense. “This year we have to go 100 percent all game.”

The Tigers have had some encouraging results this season.

After beating Harris County 2-0 in a preseason game, Troup opened the regular season with a 6-0 win over Brookstone before dispatching Griffin 3-1 and Central-Carroll 5-1.

Troup suffered its first loss on Friday when it fell to a strong Smith’s Station (Ala.) team 2-0, and it then rallied from a 1-0 halftime deficit against Opelika to force the tie.

“Just the way we’ve been playing shows that we’ve been becoming a better team, and we’re trusting each other more,” Vazquez said.

Vazquez is part of a group of Troup players who have been together for years.

To make that a reality, Troup will need to finish fourth or higher in the region, and that’s no easy feat considering three of the teams are ranked in the top 10 in the state.

The Tigers aren’t shying away from the challenge, though, and Trotter believes the team can compete with the elite teams in the state.

“I think that we have an extremely good chance to go to state and make it far,” said Trotter, who scored Troup’s lone goal against Opelika. “It’s my senior year. It’d be great to do that.”

Herrera, whose corner kick set up Trotter’s goal in the Opelika game, said this is the best Troup team he’s been a part of in his four years at the school.

“This year, it’s probably going to be our best season throughout all the years we’ve been playing,” Herrera said.

Moore, Troup’s outstanding goal keeper, said everyone on the team is committed to making the most out of this season.

“I feel like everyone on the team has the same mindset, to go out and do our best,” Moore said. “Not just play halfway, go 100 percent.”

Fannings said it helps that everyone on the team gets along so well.

“We’re not just a group of people playing soccer together,” Fannings said. “It’s like a family, really.”

It’s a family with plenty of talent, with each player accepting whatever his role is and performing it well.

One of those players is Moore, who hasn’t allowed more than one goal in a game this season.

Moore enjoys the feeling of being the last line of defense, of knowing how much everyone is depending on him.

“It’s a good feeling, knowing you have the team on your back,” Moore said. “It’s your responsibility. It’s something I like having on my shoulders.”

Moore remembers all too well what happened last year against Woodward Academy, and he’s looking forward to testing himself today.

“I’m wanting to prove myself,” he said. “I don’t want that happen again this year.”

Vazquez is another key part of Troup’s defensive puzzle, and he takes a lot of pride in his job.

“You don’t win without defense,” he said. “You just have to give it all you have that day.”

While Troup’s defense has been terrific, the offense has gotten the job done as well, with Trotter, Hale, Herrera and others putting the ball in the net this season.

Troup will need to have everything working today to have a chance against Woodward Academy, and Herrera said he and his teammates are prepared.

“I’m ready for tomorrow,” Herrera said. “They’re coming in hard, but we are also. We’re ready.”

Hale said he’s eager for the challenge that playing a team as strong as Woodward Academy offers.

“Last year, it was 1-0 at the half, and then they mercy-ruled us, so we know Woodward’s a good team,” Hale said. “But we’re excited to play.”