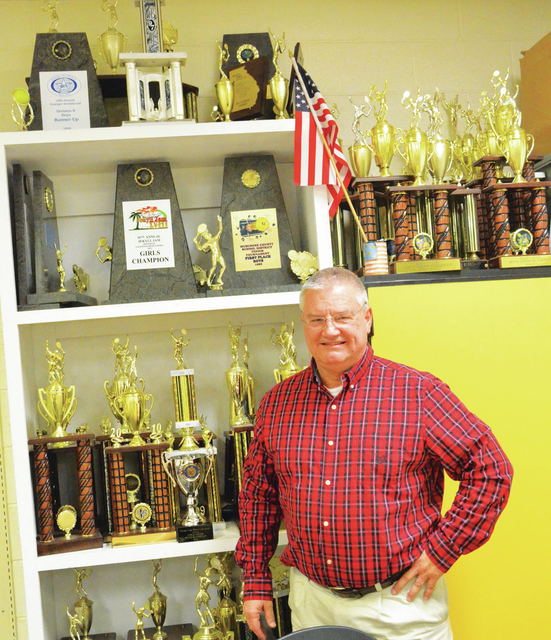 Kenny Moore, a Calculus teacher at LaGrange High and the school’s tennis coach, is going to China to lead a workshop. Kevin Eckleberry | Daily News

http://lagrangenews.com/wp-content/uploads/sites/37/2016/03/web1_moore1.jpgKenny Moore, a Calculus teacher at LaGrange High and the school’s tennis coach, is going to China to lead a workshop. Kevin Eckleberry | Daily News

Kenny Moore stands in front of some of the trophies his tennis teams have won over the years. Moore has been either a football coach or a tennis coach at LaGrange High since 1989. Kevin Eckleberry | Daily News

http://lagrangenews.com/wp-content/uploads/sites/37/2016/03/web1_moore2.jpgKenny Moore stands in front of some of the trophies his tennis teams have won over the years. Moore has been either a football coach or a tennis coach at LaGrange High since 1989. Kevin Eckleberry | Daily News

LAGRANGE – There is no busier time of the year for LaGrange High’s Kenny Moore.

Moore is LaGrange’s tennis coach, and the Grangers are in the midst of their season, and there is a massive tournament coming up in a few weeks that the team hosts.

Moore is also an Advanced Placement Calculus teacher at LaGrange, and he is hard at work preparing his students for a major test that’s coming up.

So what would it take for Moore, in the midst of all of that, to pack his bags and leave for a week?

How about the chance to go to another country and teach the subject he loves, and participate in what could be a once-in-a-lifetime experience.

For the past few years, Moore has been working as a consulant with the College Board, and he has traveled to different places in the country to lead workshops designed to instruct Calculus teachers on the best way to communicate a challenging subject to their students.

Just last fall, Moore went to Wisconsin and Ohio to lead a workshop, and the year before that he traveled to Los Angeles, and this summer he’ll be going to Texas, Louisiana, North Carolina, South Carolina and Florida.

Earlier this year, Moore heard about an opening to teach a similar workshop outside of the United States, and he decided to go for it.

“Back in January, I had an opportunity to apply to teach this workshop in Kunming, China,” Moore said. “It’s a two-day workshop for Chinese teachers, and international teachers. So I applied, and was chosen to do it. And I’m so excited.”

Moore will leave on Wednesday, and he’ll be gone for about a week, and while he’s not thrilled with the idea of leaving during such a hectic time, he said everyone at the school has been enormously supportive, including principal Penny Johnson, assistant tennis coach David Traylor, and his students.

“I talked to several people, including my principal, Dr. Johnson, and she was so nice and supportive,” Moore said. “And I talked to coach Traylor, who will have to really fill in the gaps while I’m gone with the tennis program.”

As for his senior students, who Moore is so close to, he said their reaction to the news nearly brought him to tears.

“When I announced it to the seniors, they spontaneously clapped for me,” Moore said. “I just about teared up. That was pretty cool. The kids, they’ve been so special.”

Moore has been at LaGrange High since 1989, and he has been teaching AP Calculus for the past 25 years.

Eight years ago, Moore decided to take on a new challenge, and he began putting on workshops for the Georgia Department of Education.

“I was just going around Georgia to different places, and just teaching Calculus teachers,” Moroe said.

Then a couple of years back, Moore began working for the College Board, a non-profit organization that helps students prepare for key tests like the SAT.

“They hired me as a consultant,” Moore said.

Working with the College Board has allowed Moore to travel the country, something he has enjoyed immensely, and now he’ll be taking his teaching knowledge to another part of the world.

Moore will be flying out of Atlanta on Wednesday, and after a stop in Seattle, he’ll arrived in Shanghai, and from there he’ll go to Kunming.

The workshop will be on a Saturday and a Sunday, and the following Monday will be what Moore said is “a cultural day” where he’ll get to put on his tourist hat.

Moore figures he won’t have to change things too much, since Calculus is Calculus no matter where you are on the globe, but he’s not sure if his anecdotes about growing up in South Georgia will work in China.

“I’ve developed several South Georgia stories,” Moore said. “When I to go Los Angeles, or Madison, or West Virginia or wherever, a lot of the teachers have enjoyed my accents, and enjoyed my South Georgia ways. I don’t know that I’ll have that advantage in China.”

After his work in China is done, Moore will return home and get ready for the Granger Invitational, a massive tennis tournament the team has been putting on for years.

He’ll also be back in his class room, doing what he believes he was born to do.

“I have known that I want to be a math teacher and a football coach since I was in the eighth grade,” said Moore, who coached football at LaGrange for nearly 20 years and was a part of four state-championship teams. “I never wavered from that.”

His first two years at LaGrange, Moore was a math teacher, and he eventually followed in the footsteps of Gene Hayes, who at the time was the AP Calculus teacher.

Even now, after a quarter of a century of teaching Calculus, Moore said he’s still trying to live up to the standard said by Hayes.

“For two years, my mentor Gene Hayes, was the Calculus teacher here,” Moore said. “He was the legendary math teacher. Anybody around LaGrange that’s my age, they just revere Gene Hayes. I followed him, and I really felt like I was following Bear Bryant. Whatever I did was not going to measure up to Gene Hayes. He has been so special. I still feel like I’m teaching in his shadow. He’s a special guy, and a special friend.”