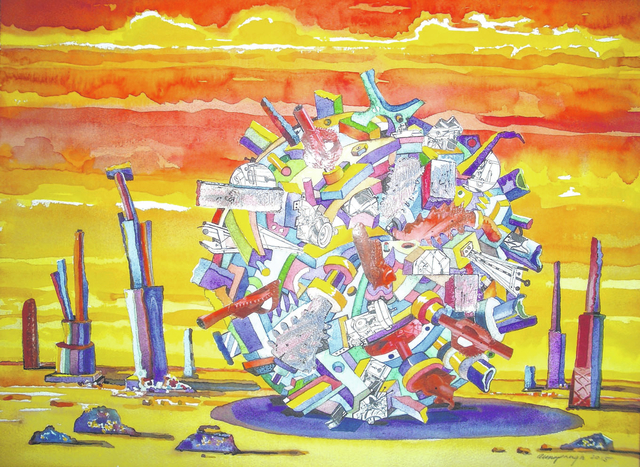 ‘Sunset Colors’ by LaGrange College alumnus Richard ‘Dick’ Aunspaugh, whose work will be on display at MAC Gallery in Chatsworth starting Thursday.

http://lagrangenews.com/wp-content/uploads/sites/37/2016/03/web1_0306AunspaughArt.jpg‘Sunset Colors’ by LaGrange College alumnus Richard ‘Dick’ Aunspaugh, whose work will be on display at MAC Gallery in Chatsworth starting Thursday.

CHATSWORTH — Art by a LaGrange College alumnus will be featured at an exhibit by the Murray Arts Council.

“Works by Aunspaugh,” an exhibit of art by Richard “Dick” Aunspaugh, Fulbright scholar and professor emeritus of Young Harris College, opens Thursday, March 10, 2016, in Chatsworth. A public reception is set for 6 to 9 p.m. Thursday at MAC Gallery, 121 E. Market St. in Chatsworth.

The exhibit will remain on view until May 27.

Aunspaugh is a 1963 graduate of LaGrange College. He taught art at Young Harris College for 33 years, beginning in 1973. A year earlier, he had received his master of arts degree at New York University in New York City. In 1990 he obtained his master of fine arts degree at Milton Avery Graduate School of the Arts, Bard College, in Annandale-on-Hudson, New York, participating in the MFA Thesis Painting Exhibit that year.

“Works by Aunspaugh” will feature drawings, paintings and sculptures. For his current sculpture he recycles found objects, turning them into “balls of crap.” He makes intricate drawings and paintings of the same, turning them into eerie landscapes. The pop and Dada influences in his art reflect an early immersion in the New York art scene of the 1960s.

During the 1960s, Aunspaugh participated in “Happenings” and exhibits in New York, including one exhibit at Brooklyn Museum of Art. His work has also shown in San Francisco, California, and Georgia.

As a professor at Young Harris College, he continued to both exhibit and study art. Venues include Nexus Art Center in Atlanta, State College in Minot, North Dakota, and Lamar Dodd Art Center at LaGrange College.

In 1979 Aunspaugh received the honor of a Fulbright Study Tour: Art of the Low Countries. His work has been included in the LaGrange National II (1975) and other exhibits throughout Georgia.