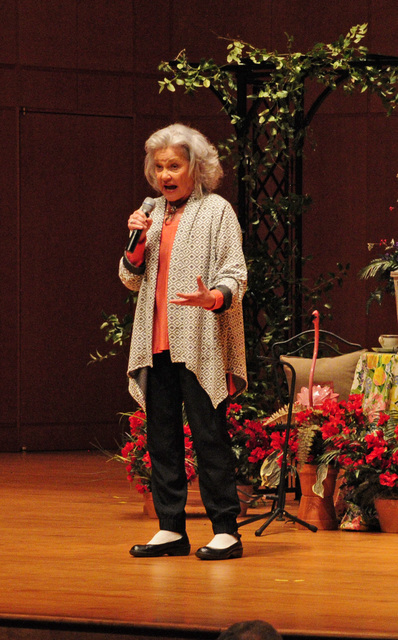 Donald Davis gestures to the crowd Friday at Callaway Auditorium as he tells a version of the story he told at the first Azalea Storytelling Festival. Davis also was instrumental in starting the annual festival, which marked its 20th year over the weekend.

http://lagrangenews.com/wp-content/uploads/sites/37/2016/03/web1_web0307AzaleaDavis.jpgDonald Davis gestures to the crowd Friday at Callaway Auditorium as he tells a version of the story he told at the first Azalea Storytelling Festival. Davis also was instrumental in starting the annual festival, which marked its 20th year over the weekend.

LaGRANGE — The 20th anniversary of the Azalea Storytelling Festival over the weekend brought back tellers who have entertained audiences in years past, including two from the first event.

Storyteller Donald Davis was instrumental in helping create LaGrange’s storytelling festival, noted Carol Cain, the weekend event’s emcee, during Friday night’s kick off. Davis had been conversing with Evelyn Jordan, LaGrange College education professor, and Pat Gay, Troup-Harris Regional Library youth services director, during a storytelling festival in Albany, where Davis was a featured teller. When Jordan and Gay pondered the possibility of a festival in LaGrange, Davis affirmed it could be done and offered his support.

“Now it’s just a natural part in the first weekend of March to tell people where we’re going to be,” Cain told festival-goers.

At one point in the night, Cain polled audience members about where they came from. Attendees announced being from areas as far away as South Dakota, Pennsylvania, Maine, Minnesota and one attendee who has been to the last few festivals was from Austria, but recently moved to Tennessee.

Davis kicked off the storytelling festival with an updated version of the same story he told at the first event 20 years ago, he told the crowd.

Recalling his youth when Southern Bell first installed phone lines in North Carolina, his uncle Frank got a phone line, but it was part of a rural party line shared with eight other households. Despite his uncle’s anticipation of using his phone, it was always tied up between a pair of unmarried sisters on the line who talked all day.

After about four months of not getting to talk on his phone, he picked up the line one day to find it silent. So he dialed one of the sisters and impersonated “Mr. Bell, one of the Southern Bells,” and told her part of the line had fallen in a river and was sucking up the water. If she stayed on the line, her house could flood.

His ruse worked to get the sisters off the phone, but then backfired as both took their phones off the hook — keeping the line busy — and hung them out of their windows to drain. He then wrote letters to the sisters as Mr. Bell to inform then that they were safe to bring their phones inside.

When storyteller Barbara McBride Smith was a 7-year-old child, she told the crowd, she stole from her Sunday school class a figurine of “Mrs. Lott,” who turned into salt in the Bible after looking back at the burning city of Sodom. She had felt sympathetic toward “Mrs. Lott” and felt confused and conflicted about why God would punish someone for such a minor act of disobedience.

“Why did God do that?” she asked her mom. “I don’t think I like the Bible any more. And I’m not too fond of God any more.”

Her mother told her not to blame God for stories in the Bible, because God didn’t write the Bible. She brought back the figurine, and her teacher told her she did the right thing because God sees all, but, “It was more mom sees all.”

Now looking back, she believes “Mrs. Lott” turned back to see if her family and friends were safe, and seeing no one following her, decided she couldn’t go on. She believes God turned her into a pillar of salt in representation of her salty tears.

“We tell stories so that people will know we were here,” she said “(And) I think my mom and Mrs. Lott have a lot in common — they are both salt of the earth kind of women.”

Michael Reno Harrell played some songs for the audience, poking fun at his penchant for collecting junk items. He said he came by it naturally from his mother, who grew up during the Great Depression and saved everything.

When she died and his family gathered to clean out her home, it took them 17 straight weekends, Harrell said.

“It took weeks to go through the couch, but I did find enough change to put my niece through Appalachia State University,” he joked.

While cleaning, he, his siblings and in-laws competed for a free lunch at Shoney’s by trying to find the oddest object. He found a Ingles bag full of vacuum attachments, but his brother one-upped him with a hubcap from a vehicle she never owned that was full of buttons. Harrell then found half of a toothpick in a Ziploc bag, but his sister found half of a thermometer with a BB in it.

His sister-in-law then jumped in with 186 pocket books she found in the closet, all empty except for one chap stick container, which they discovered had been re-filled with Vaseline. His brother took the prize, though, by finding an Alka Seltzer container with 37 and a half broken sewing needles inside.

Harrell now keeps that bottle in his home, as part of his room that overlooks the mountains as he crafts his songs, as a way to keep part of his mother with him.

Ed Stivender, who, like Davis, performed at the first Azalea Storytelling Festival, rounded out the night.

He opened singing with the crowd on his banjo-led Azalea theme song, with some stumbles that he promised the crowd were planned.

He told a story of his uncle Mike who used a makeshift two-way communicator to play the banjo for his grandmother about a half-mile away, and she would play him AM radio. Mike had a problem with a bear coming around his home when he played, so he took a gun one night, waiting for the bear to show up all night.

When morning came, he fell asleep, but was awakened as the bear came through his open door, ready to attack. He hit the two-way, and the grandmother placed her radio against her end of it, thinking he wanted to listen to music. She soon heard the bear growling, realized what was going on and grabbed her gun, running to Mike’s home.

When she got there, Mike told her the bear had stopped and begun to dance when it heard the music. It then grabbed the banjo and fled.

“That was the last time he’d see that bear, but sometimes he would be outside at night and think he would hear — “

Stivender then strummed the tune of “dueling banjos” and mimicked the same harmony in bear growls, as the crowd laughed.