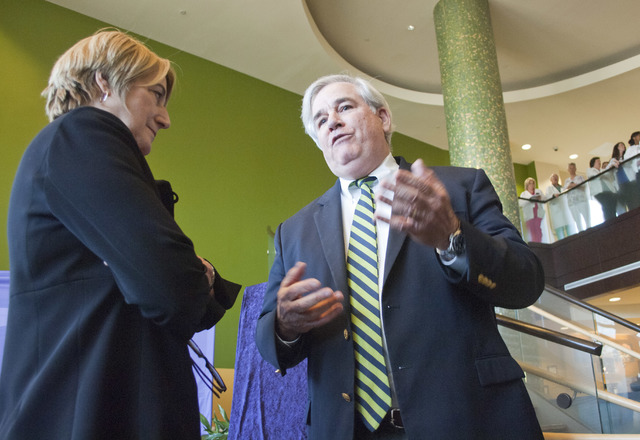 Jerry Fulks, president and CEO of West Georgia Health, holds a sign unveiling the new name of West Georgia Medical Center, which will add WellStar’s name, during a signing ceremony Monday at WGMC.

http://lagrangenews.com/wp-content/uploads/sites/37/2016/03/web1_WellStar01WEB-2.jpgJerry Fulks, president and CEO of West Georgia Health, holds a sign unveiling the new name of West Georgia Medical Center, which will add WellStar’s name, during a signing ceremony Monday at WGMC.

West Georgia Health and WellStar officials pose for a photograph Monday following the signing of a merger agreement.

http://lagrangenews.com/wp-content/uploads/sites/37/2016/03/web1_WellStar02WEB-2.jpgWest Georgia Health and WellStar officials pose for a photograph Monday following the signing of a merger agreement.

LaGRANGE — After more than a year of planning and hand wringing, it’s a done deal.

West Georgia Health signed an agreement Monday to merge with Marietta-based WellStar Health System in a deal estimated to provide $40 million in community benefit, according to independent auditors.

The deal is technically a sale under state regulation, although no money changed hands. The agreement will take effect April 1, and after that WellStar will act as West Georgia Health’s parent organization. Local, day-to-day control of LaGrange’s only hospital will largely remain in the hands of West Georgia Health’s board of trustees, although big picture decisions will be made by WellStar’s parent board.

The brick-and-mortal hospital will continue to be owned by the LaGrange-Troup County Hospital Authority, which currently leases it to West Georgia Health. On April 1, WellStar will become the new lessee.

WellStar has agreed to infuse $84 million in capital improvements to West Georgia Health’s campus over the next seven years and brings with it $2 billion in annual revenue and a network of hospitals, specialists and health care providers.

“I feel very relieved,” said Jerry Fulks, president and CEO of West Georgia Health. “I think we’ve struck a great deal with WellStar and I believe the future of health care in LaGrange, Georgia, is much brighter.”

The merger agreement comes in the wake of massive changes in health care under President Barack Obama’s signature Affordable Care Act, also called Obamacare. Hospital officials have said previously the merger was necessary for continuity of services and that being part of “economies of scale” would be key to maintaining a hospital in LaGrange.

In the past, West Georgia Health had financial headaches. Between 2010 and 2013, it ran deficits each year, sometimes nearly $6.2 million, as in 2013. The sale of its dialysis center in 2012 and a round of layoffs in 2014 wasn’t enough to turn the tide, and hospital officials started shopping around for a potential partner.

The health care system has since turned a corner and is now operating in the black, but its merger with WellStar will allow it to accelerate capital improvement projects, like the renovation of the Enoch Callaway Cancer Clinic. WellStar has promised to spend $30 million over the next two years on renovations at West Georgia Health, and Fulks said Monday he expects the cancer clinic project to begin by the end of 2016.

As the third largest employer in Troup County, about 1,400 people work for West Georgia Health, according to the Troup County government’s latest Comprehensive Annual Financial Report.

No changes in staffing levels or employment will be made for the first six months after the partnership begins, according to the West Georgia Health-WellStar agreement.

WellStar’s CEO, Candice Saunders, has told the Daily News her company will make every effort to avoid layoffs by advanced strategic planning. She also said WellStar’s goal is to retrain displaced employees and find them other positions within the health care system should layoffs occur.

“That’s something that’s been a long-standing tenant of our health system,” Saunders previously said. “We really build our reputation on being an employer of choice and we have a very strong commitment to our people and our caregivers.”

Now, under the agreement between West Georgia Health and WellStar, the bond’s burden will be off the backs of Troup County tax payers and entirely the responsibility of WellStar in the event the hospital ever went into default.

“In the unlikely event that Troup County would ever be called upon to make a payment for bonds … WellStar has agreed to pay the necessary funding to meet the county’s debt service payment obligation,” according to a statement from West Georgia Health and the agreement.

According to financial documents released by the West Georgia Health Board of Trustees last month, the hospital is up to date on its bond obligations and has more than double the amount of cash on hand to stay within the bond’s agreement.

After April 1, signage and the name of the hospital will slightly change, but insurance acceptance won’t, Fulks said Monday.

“We don’t expect there to be any changes in insurance coverage,” Fulks said “I think the services we provide are committed to our community.”

Read LaGrange Daily News this week as we continue a series on the WellStar-West Georgia Health partnership and evaluate how it will affect the community.