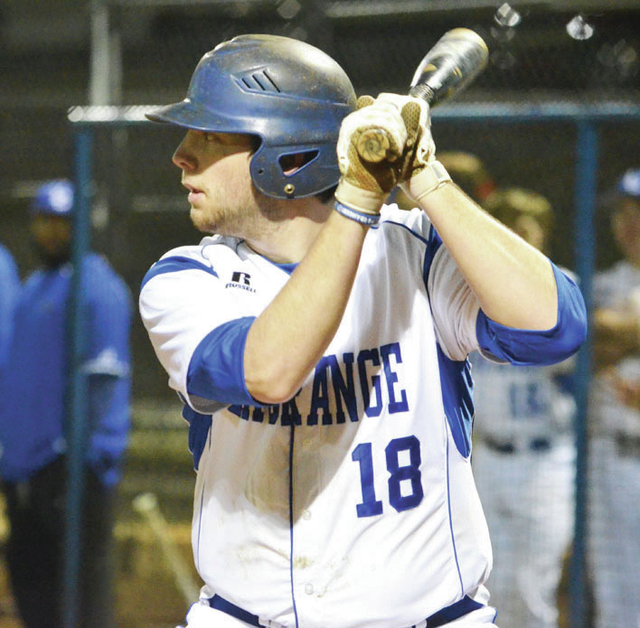 LaGrange’s Larkin Easterwood follows through on a home-run swing during the fifth inning of Monday’s 5-0 win over East Coweta. It was Easterwood’s fourth home run of the season. Kevin Eckleberry | Daily News

http://lagrangenews.com/wp-content/uploads/sites/37/2016/03/web1_LHS6.jpgLaGrange’s Larkin Easterwood follows through on a home-run swing during the fifth inning of Monday’s 5-0 win over East Coweta. It was Easterwood’s fourth home run of the season. Kevin Eckleberry | Daily News

LaGrange’s Coy Tedescucci pitched into the fifth inning and was the winning pitcher in Monday’s 5-0 victory over East Coweta. Kevin Eckleberry | Daily News

http://lagrangenews.com/wp-content/uploads/sites/37/2016/03/web1_LHS8.jpgLaGrange’s Coy Tedescucci pitched into the fifth inning and was the winning pitcher in Monday’s 5-0 victory over East Coweta. Kevin Eckleberry | Daily News

LaGrange’s Champ Willis holds the ball after catching a popup for the third out in the fourth inning. Kevin Eckleberry | Daily News

http://lagrangenews.com/wp-content/uploads/sites/37/2016/03/web1_LHS14.jpgLaGrange’s Champ Willis holds the ball after catching a popup for the third out in the fourth inning. Kevin Eckleberry | Daily News

LaGrange’s Ben Anderson scores a run in the fifth inning after reaching on a two-out double. Kevin Eckleberry | Daily News

http://lagrangenews.com/wp-content/uploads/sites/37/2016/03/web1_LHS5.jpgLaGrange’s Ben Anderson scores a run in the fifth inning after reaching on a two-out double. Kevin Eckleberry | Daily News

LAGRANGE – He was ready for the moment.

On Friday, following LaGrange’s 6-4 win over Sandy Creek, junior Coy Tedescucci was told by head coach David Smart that he’d be the starting pitcher for Monday’s game against East Coweta.

“He came up to me after the game and said I was getting the rock on Monday,” Tedescucci said. “I was preparing all weekend.”

Tedescucci, who was making his first start of the season, made his coach’s decision look like a great one.

Tedescucci was pitching a shutout when he was pulled from the game with two outs in the top of the fifth inning, and senior Jake Howard came in and got the final out with two men on base.

Howard then pitched two more scoreless innings to get the save, and Tedescucci was the winning pitcher in the 5-0 victory over an outstanding East Coweta team.

“I was really excited for him,” Smart said. “He’s kind of bided his time and earned his shot. He got it, and he took advantage of it. You’re really happy for a kid when he wants something so bad, and it works out for him. That’s a win-win for us.”

Tedescucci got the start in a recent junior-varsity game, and he used that as an audition of sorts.

“The JV game, I pitched to show (Smart) what I could do,” Tedescucci said. “I showed him, and he gave me a shot.”

The Grangers finished the non-region portion of their schedule with a 5-3 record, and they’ll host the Columbus Blue Devils on Thursday in their Region 1-AAAAA opener.

Beating a quality East Coweta team that came into the game with a 7-1 record was a nice way for LaGrange to head into its region schedule.

“It’s great to get some momentum going into region play,” senior first baseman Jake Farrar said. “We played really great, had a lot of energy.”

While Tedescucci and Howard got it done on the mound, senior Larkin Easterwood provided some offensive fireworks with a two-run home run, as well as a double.

Farrar added an RBI double, Matthew Anderson drove in a run with a single, and David Sweat scored the game’s first run when he stole home in the third inning.

It was also a stellar day in the field, with a number of players making outstanding plays to help keep the shutout intact.

In the top of the second, LaGrange catcher Champ Willis threw a potential base-stealer out at second, putting a halt to what could have been a big inning, and the junior also made a terrific stop on a pitch in the dirt in the fourth inning with two men on base.

In the third inning, Sweat, the right fielder, threw an East Coweta player out at second who was trying to stretch a single into a double.

In that same inning, left fielder Andrew Askew made a nice running catch for the third out.

Third baseman Willis Kemp also got into the act with a diving catch on a bunt attempt.

“It was good to kind of gain some momentum going into Thursday,” Smart said. “It was our objective to play well, and it turned out really good. They did a great job. The kids really fought really hard, competed hard at the plate. They’ve got some good arms I thought. So I thought our kids really battled and competed.”

Easterwood said the team built on a solid practice session from the previous day.

“I think the way we came out today was because of our preparation yesterday,” Easterwood said. “We were all hyped up, and ready to play.”

It was scoreless through two innings when LaGrange broke through in its half of the third.

With two outs, Sweat was on third and Ben Anderson was on first with Farrar at the plate.

Anderson took off from first and got caught in a rundown, and Sweat raced toward the plate and beat the throw, and the Grangers led 1-0.

That’s a play the Grangers work on in practice, and they executed it flawlessly.

“We work on that a lot, we really do,” Smart said. “It’s a crap shoot. Sometimes it works out where you can score on it. Not that they executed it poorly, our timing was just really good.”

LaGrange tacked on another run in the fourth inning.

Easterwood led off with a double, and after moving to third on a passed ball, he scored when Matthew Anderson served a two-strike pitch into right field for a base hit.

East Coweta threatened in the top of the fifth.

With two outs, Tedescucci walked a pair of batters, and Smart brought in Howard, who got a strikeout to end the inning, and LaGrange was still ahead 2-0.

The Grangers broke it open in the bottom of the fifth.

With two outs, Ben Anderson went the opposite way for a double just over the third-base bag.

Farrar then stepped to the plate and ripped the ball over the center fielder’s head for a double to bring in Anderson, and LaGrange led 3-0.

Next up was Easterwood, and he drove the ball over the center-field fence for his fourth home run of the season, and LaGrange’s lead was five.

Easterwood was sitting on a fastball, and that’s what he got.

“I was looking fastball the whole time,” Easterwood said. “That’s my mindset.”

Smart was thrilled to see his team put together a two-out rally.

“We scored those three with two outs,” Smart said. “That was really big.”

East Coweta, which had base runners in every inning, threatened to break through in its final two at-bats, but Howard was up to the challenge.

In the sixth inning, East Coweta had two on and no outs, but Howard was able to retire the side without a run scoring.

In the seventh inning, East Coweta had the bases loaded with two outs, and Howard got a flyout to end that threat, and the game.

LaGrange will now turn its attention to region play, beginning with Thursday’s home showdown with an unbeaten Columbus team.

Those same two teams will play again on Friday at Columbus High.

“They’re really good,” Smart said. “We’ll definitely have our hands full on Thursday when they come in here.”

Panthers finally get to play at home