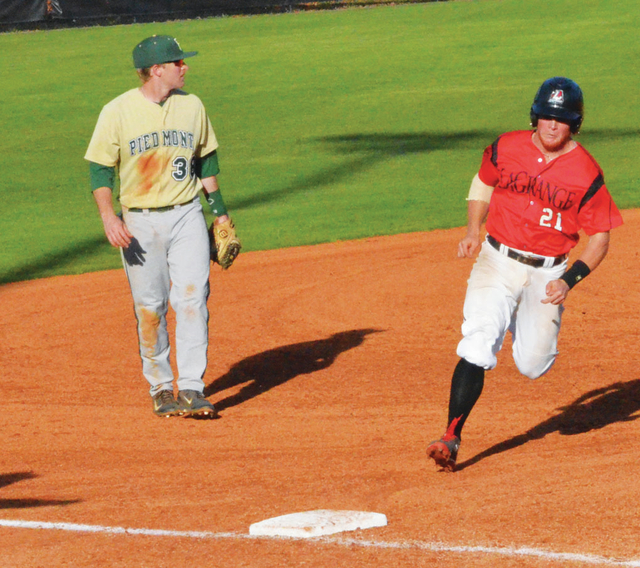 LaGrange College’s Blake Butcher rounds third on the way home with one of his team’s runs during Monday’s loss to Piedmont. Kevin Eckleberry | Daily News

http://lagrangenews.com/wp-content/uploads/sites/37/2016/03/web1_panthers4-1.jpgLaGrange College’s Blake Butcher rounds third on the way home with one of his team’s runs during Monday’s loss to Piedmont. Kevin Eckleberry | Daily News

LAGRANGE – The series started out in outstanding fashion for the LaGrange College Panthers, who thumped visiting Piedmont 14-1 on Sunday.

Unfortunately for the Panthers, the final two games of the USA South series didn’t go quite as well.

After losing the second game of Sunday’s doubleheader 3-1, LaGrange College fell to Piedmont 15-5 on Monday in the series finale.

The Lions took control early, scoring runs in each of the first three innings to build a 5-0 lead, and they kept pouring it on to win the rubber game in the series.

Piedmont hammered out 18 hits against three LaGrange College pitchers, and it scored at least one run in all but one inning.

First baseman Breck Davidson did a lot of the damage for Piedmont.

Davidson was 4-for-5 with four RBIs, and he hit for the cycle, meaning he had a home run, a triple, a double and a single.

Blake Butcher had two of the Panthers’ five hits with an RBI, Casey Bell knocked in a run with a double, and Kyle Gutowski had a run-scoring single.

Chad Pigg also had an RBI for the Panthers.

Former Callaway Cavalier Tavin Thompson had his 17-game hit streak snapped, but he did reach base twice on walks, and he scored two runs.

Austin Brown (0-1) got the start for the Panthers, and he gave up seven runs on nine hits in four innings.

LaGrange College will be on the road for its next nine games, beginning with today’s game against Berry College.

LaGrange College will return to conference play on Friday for the start of a three-game series against Huntingdon.

LaGrange College won’t be home again until March 22 when it faces Oglethorpe.

Panthers finally get to play at home