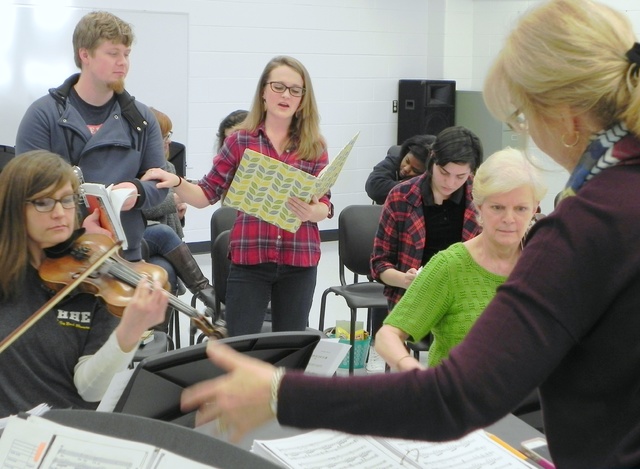 Toni Anderson, director of the Music program at LaGrange College, conducts a rehearsal of a scene from the opera, ‘The Ballad of Baby Doe.’

http://lagrangenews.com/wp-content/uploads/sites/37/2016/03/web1_Ballad-of-Baby-Doe-1.jpgToni Anderson, director of the Music program at LaGrange College, conducts a rehearsal of a scene from the opera, ‘The Ballad of Baby Doe.’

LaGRANGE — Stories of scandal, revenge and pirates — yes, pirates — run through the selections featured in “Frolic and Fate: Opera on the Callaway Stage.” The show opens Thursday and runs through Saturday.

The four operas featured are “The Merry Wives of Windsor” by Otto Nicolai, “The Ballad of Baby Doe” by Douglas Moore, “Die Fledermaus” by Johann Strauss II and “The Pirates of Penzance” by Gilbert and Sullivan.

LaGrange College senior Linda Jackson and junior Savannah Bracewell appear in the “Merry Wives of Windsor,” the story of two women who seek revenge on a man who is trying to seduce both of them at the same time.

“Both of these women also are looking for a little fun in embarrassing Falstaff,” said Bracewell. “They are quite successful with that, making the piece a lot of fun.”

“The Ballad of Baby Doe” is based on historical figures Horace Tabor, his first wife, Augusta, and his second wife, Baby Doe. Tabor and Augusta struck it rich when they discovered a silver mine in Colorado. Trouble starts when divorcee Baby Doe moves to town, and Horace falls in love with her. A scandal ensues and society is horrified.

Junior Jalen Smith plays Gabriel von Eisenstein, an egotist who wants to be the best at everything, no matter what.

“Even when he knows he is going to jail, he wants to be the best prisoner,” he said.

“This is actually an operetta because there are long stretches of dialogue between numbers,” Bearden said. “It almost has the feel of a musical rather than an opera, but it is still classically sung.”

The final piece is from “The Pirates of Penzance,” by Gilbert and Sullivan.

“This operetta is known for its lively music, humor and fun,” said sophomore Kelsey Seals, who plays Mabel.

The Pirate King and his pirates have landed on an island to celebrate that Frederic, one of their own, has come of age. However, he actually became a pirate by mistake.

“Yeah, about that,” said Smith, who plays Frederic. “Ruth, who is my nursemaid, was with me when I began my apprenticeship at the age of 8. But because of her poor hearing, she mistakenly apprenticed me to a pirate instead of a pilot.”

Mabel and her sisters visit the island and encounter Frederic.

“He’s awestruck because he’s never seen a woman, other than Ruth,” Seals said. “He and I fall in love, but then the pirates make an appearance, and that’s when the trouble begins.”

Toni Anderson, director of the music program, is conductor and stage direction is by Kim Barber Knoll, head of the theater arts program. Guest choreographer is Nancy Gell.

“This production is the perfect example of how our music, theatre and dance programs collaborate,” Anderson said.

Because of the difficulty of the material, musical rehearsals for this opera production began last fall.

“We layered in staging and choreography during Jan Term and have continued intensive rehearsals this spring,” she said.

The collaboration is not limited to the artistic team; it is also represented in the cast and crew, Anderson said.

“Music, theater, musical theater, composition and music technologies, and even nursing and exercise science majors, came together to make this show happen,” she said. “This is the first operatic experience for all but a few members of the cast. We are so proud of how they have risen to the challenge.”

“Frolic and Fate: Opera on the Callaway Stage” runs Thursday, March 10, to Saturday, March 12, at Callaway Auditorium with shows at 7:30 p.m. Thursday and Friday and at 2:30 p.m. Saturday. Tickets are $10. LC faculty, staff and students are admitted free.