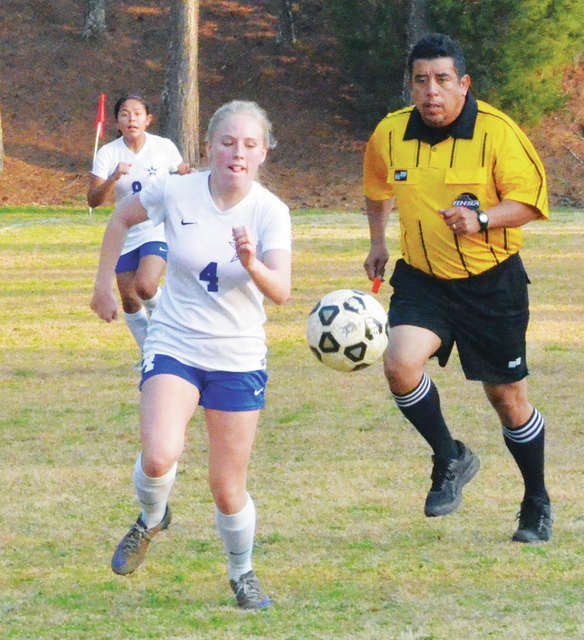 LaGrange’s Catherine Patton gets ready to take a corner kick during the first half of Tuesday’s game. Patton scored a goal in the 9-0 win. Kevin Eckleberry | Daily News

http://lagrangenews.com/wp-content/uploads/sites/37/2016/03/web1_LHS9-1.jpgLaGrange’s Catherine Patton gets ready to take a corner kick during the first half of Tuesday’s game. Patton scored a goal in the 9-0 win. Kevin Eckleberry | Daily News

LaGrange’s Eva Hutton chases a ball down during the first half. Kevin Eckleberry | Daily News

http://lagrangenews.com/wp-content/uploads/sites/37/2016/03/web1_Hutton.jpgLaGrange’s Eva Hutton chases a ball down during the first half. Kevin Eckleberry | Daily News

The LaGrange Lady Grangers have been hit by the injury bug this season, with three key starters missing from the lineup at times.

One of those players, Maggie Asbell, won’t be able to play this season because of an ACL injury, but Reagan Peters and Maddie Patton are back in the lineup and they both played key roles in Tuesday’s 9-0 victory over the Troup Lady Tigers at Gardner-Newman Middle School.

Freshman Katelyn Peters, the younger sister of Reagan Peters, notched a hat trick with three goals, and Maddie Patton and Catherine Patton each scored one goal.

Andy Fritchley, LaGrange’s first-year coach, is glad to have a mostly healthy lineup with some critical games coming up, including Monday’s Region 1-AAAAA showdown against Columbus.

LaGrange will host Central-Phenix City on Friday at 5:30 p.m., and the team will then turn its full attention to the Columbus game.

“The big one is coming up Monday,” said Fritchley, whose team lost to Northside on penalty kicks in its region opener. “That’s a huge game.”

Peters said having the two games this week will be a benefit heading into the Columbus game.

“We definitely needed to work on some things, and these two games will help us prepare for Columbus,” Peters said.

Peters, after missing a few games, is happy to be back in the lineup.

She pulled a hamstring during a loss to Fayette County on Feb. 12, and she was unable to play the next two games.

Peters returned to the field for the Northside game last week, and she also played in Friday’s game against Smith’s Station.

“It’s still kind of tight, but I’m playing through it,” she said.

If the Lady Grangers (2-5) prevail on Friday, they would have their first winning streak of the season, and Maddie Patton said that will help them “be on good terms when we face Columbus.”

“We’ve got our hopes up,” she said. “That win would put us in a really good spot in the region.”

Maddie Patton isn’t usually in a position to score, so she enjoyed the chance to put one in the net against Troup.

“I always play defense, and I got to play midfield, and I had a goal,” she said. “That was awesome.”

Catherine Patton, who had four goals in an earlier game against Kendrick, said these two games this week are important as the players work to get the offense running smoothly.

“I think it’s very important to move the ball around against schools like Columbus,” she said. “We’ve worked on that.”

LaGrange has now played eight games, including a preseason game against Newnan, and that has helped the players adjust to their new coach, and vice versa.

OF NOTE: For more photos from Tuesday’s game, go to facebook.com/LDNsports