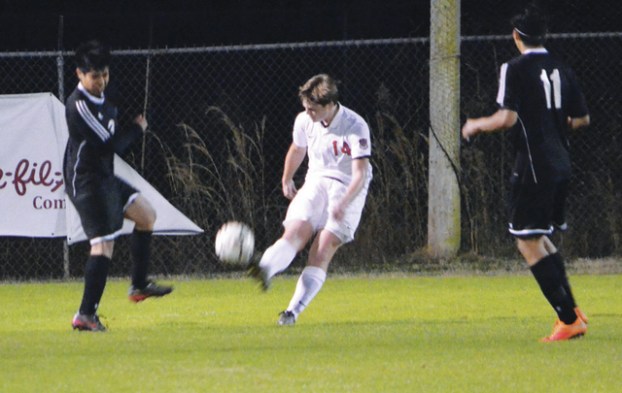 Callaway’s and Cedartown’s players fight for control of the ball during the first half of Tuesday’s game. Callaway won 4-1. Kevin Eckleberry | Daily News

http://lagrangenews.com/wp-content/uploads/sites/37/2016/03/web1_CHSsoccer11.jpgCallaway’s and Cedartown’s players fight for control of the ball during the first half of Tuesday’s game. Callaway won 4-1. Kevin Eckleberry | Daily News

Callaway’s Noah Stephens kicks the ball between a pair of Cedartown players during the first half. Kevin Eckleberry | Daily News

http://lagrangenews.com/wp-content/uploads/sites/37/2016/03/web1_CHSsoccer4.jpgCallaway’s Noah Stephens kicks the ball between a pair of Cedartown players during the first half. Kevin Eckleberry | Daily News

The Callaway Lady Cavaliers improved to 5-0 with Tuesday’s 4-1 home win over Cedartown, and they also ran their Region 5-AAA record to 2-0.

The team is under the direction of two new coaches this season, and the transition has been a smooth one so far.

Kristen Clonts is the first-year head coach, and Shawna Yawn is her assistant.

The Lady Cavaliers overcome some adversity to get the win on Tuesday.

In the first half, leading scorer Savannah Thompson had to leave the game with an ankle injury, and she didn’t return.

Clonts was pleased with the way the other players rallied and didn’t let the loss of Thompson get them down.

“The girls came back strong despite her being out,” Clonts said. “A lot of times, you lose a key player, and things crumble. But they didn’t. They picked it right back up, so I was pretty proud of them.”

The injury to Thompson came just as some other players were getting healthy.

“We’re starting to heal up,” she said. “We had some girls get knocked around in the Shaw game. But then Savannah hurt her ankle again tonight, and we’re not sure how that’s going to turn out.”

Callaway will look to stay perfect when it visits region foe Haralson County on Thursday.

In the first meeting, it was Callaway breezing to a 10-0 victory in a game shortened because of the mercy rule.

Next week, Callaway has home games against Central-Carroll and Rockmart.

Callaway was supposed to play Central-Carroll earlier this season, but that game was rained out.

Callaway and Rockmart played on March 1, and it was tied 4-4 in the second half when the game was postponed when a severe storm moved in.

Next week, the teams will complete the earlier game, and then they’ll play the regularly-scheduled game.

“We’re ready to finish some of the region games, and see if we can stay undefeated,” Clonts said.

In Tuesday’s boys’ game, the Callaway Cavaliers made their long-awaited region debut after their first four scheduled region games were rained out.

Facing a strong Cedartown team, Callaway was within a goal at the half, but it went on to lose 3-0.

It was Callaway’s first game since it lost to Shaw on Feb. 26.

“That’s our first game in two weeks,” Callaway coach Jake Hembree said. “We’re essentially starting all the way over. We had a couple of bright moments, but other than that we were flat.”

Callaway was down 1-0 at the half and it was anybody’s game, but Cedartown dominated the second half to get the win.

Callaway (3-2) will look to even its region record when it visits Haralson County on Thursday.