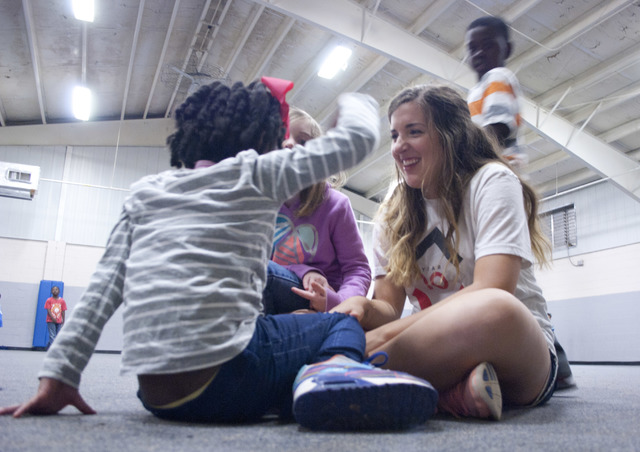 Katie Parker, right, volunteers at the Boys and Girls Club of West Georgia on Tuesday. The club meets in the old Cannon Street school building, which the city hopes can be improved if a federal grant is awarded.

http://lagrangenews.com/wp-content/uploads/sites/37/2016/03/web1_Council01WEB.jpgKatie Parker, right, volunteers at the Boys and Girls Club of West Georgia on Tuesday. The club meets in the old Cannon Street school building, which the city hopes can be improved if a federal grant is awarded.

LaGRANGE — Alan Hunn’s voice boomed in the gymnasium of the old Cannon Street school on Tuesday as he vied for the attention of dozens of rambunctious youngsters.

“If you can hear my voice, clap three times,” the 22 year old barked.

Heads turned toward him and palms slapped together as he gave instructions to the children as part of the Boys and Girls Club of West Georgia’s after school program.

The club meets at Cannon Street school and soon, if the city is awarded a federal grant, much needed improvements could be made to the facility.

On Tuesday, City Council approved a measure allowing city staff to apply for a Community Development Block Grant, or CDBG. The grant could be as much as $500,000 and comes from federal funds administered by the state Department of Community Affairs. If awarded, it would be used to overhaul the building’s hodgepodge air conditioning system, repair plumbing and leaks and add new playground equipment, according to Alton West, the city’s community development leader.

“About 700 kids are in and out of that building every day,” West told council members Tuesday. “It’s a great repurposing of the building, and it allows us to work with nonprofits that have similar community goals.”

After the school system closed Cannon Street Elementary School, the building sat empty for five years, West said, and time took its toll. But now that nonprofits, including the Boys and Girls Club, are thriving in the building, it’s time to make some upgrades.

City staff also learned about leaks in the roof after heavy rains deluged the area in late December. A computer lab in the school needs waterproofing, and the front of the building needs to be regraded to prevent water from pooling.

There are also problems with the building’s plumbing, and mold is starting to grow in some areas.

Cameron Moore, a former education director for Boys and Girls Club who was at the facility Tuesday, said she’d like to see some of the improvements made.

“It’s in need to some pretty big work,” she said of the building. “There’s some drainage problems in the bathroom and sometimes it smells like mold.”

If the city is awarded the grant, it will be a starting point for sprucing up the building, but it won’t solve all its problems. In all, West estimated the building could need as much as $1.3 million in improvements. He said the city would work to prioritize the repairs and renovations as the budget allows.

The city would also have to make a 5 percent match toward the grant, if it’s awarded.

Interim City Manager Meg Kelsey said a decision on whether the city is awarded the grant could come by Sept. 1.