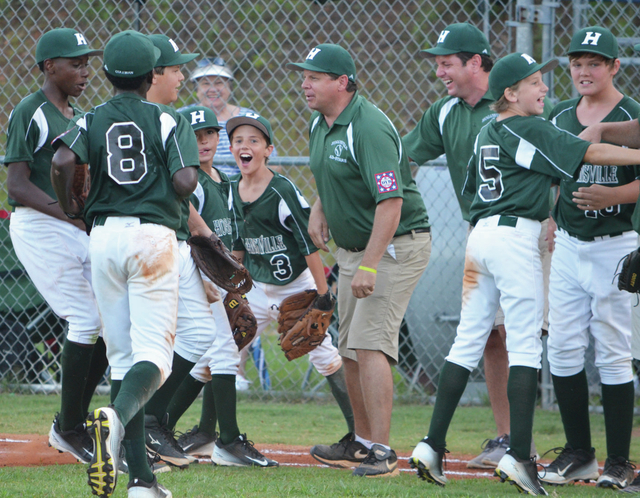 Troup’s Winston Turner rounds third during an eight-run third inning against the Callaway Cavaliers. Turner was the winning pitcher, and he also had a two-run single. Kevin Eckleberry | Daily News

http://lagrangenews.com/wp-content/uploads/sites/37/2016/03/web1_baseball12.jpgTroup’s Winston Turner rounds third during an eight-run third inning against the Callaway Cavaliers. Turner was the winning pitcher, and he also had a two-run single. Kevin Eckleberry | Daily News

With Troup’s Ken Truitt getting a lead off of first base, Callaway’s Jordan Bonner delivers a pitch during Tuesday’s game. Kevin Eckleberry | Daily News

Troup’s Miles Cameron gets a lead off of first base during Tuesday’s game. Cameron hit a solo home run. Kevin Eckleberry | Daily News

http://lagrangenews.com/wp-content/uploads/sites/37/2016/03/web1_baseball15-1.jpgTroup’s Miles Cameron gets a lead off of first base during Tuesday’s game. Cameron hit a solo home run. Kevin Eckleberry | Daily News

Troup’s Jarred Helton gets a bunt down during the eight-run third inning. Kevin Eckleberry | Daily News

http://lagrangenews.com/wp-content/uploads/sites/37/2016/03/web1_baseball9.jpgTroup’s Jarred Helton gets a bunt down during the eight-run third inning. Kevin Eckleberry | Daily News

HOGANSVILLE – The Troup Tigers completed a sweep of their county rivals with a 14-1 victory over the Callaway Cavaliers on Tuesday.

Troup, which beat LaGrange 5-1 last week, busted the game open with eight runs in the third inning, and the game ended after five innings because of the run rule.

Winston Turner, who pitched a gem to get the win against LaGrange last week, got the start in Tuesday’s game, and he tossed three innings and allowed one run.

Bo Halcomb made his season debut on the mound and finished things off with two scoreless innings.

Halcomb also got it done at the plate with three hits, including a three-run home run, and Miles Cameron added a solo homer.

Turner had a two-run single in the first inning, and Colby Willams knocked in a run with a base hit in the eight-run third inning.

Troup head coach Craig Garner, whose team bounced back after losing consecutive games, said he was pleased with the work his players did on the base paths.

“The most impressive thing was the base running,” Garner said. “I felt like we were aggressive, but under control, and it was very well-executed.”

For Callaway, there weren’t many highlights.

Noah Hammett gave Callaway its only run with an RBI single in the bottom of the third.

“We’ve just got to be more consistent,” said Callaway coach Dusty Hubbard, whose team has dropped two in a row to fall to 3-3. “We can’t be up and down.”

Callaway’s Dylan Johnson was a pitch away from getting out of the top of the first with no runs scoring.

Halcomb led off the game with a single and Ryan Bliss walked, and Johnson struck out the next two batters.

There were two strikes on Turner when he came through with a two-run single, giving his team the early lead.

The Tigers went down in order in the second inning, but they broke it open in the third.

By the time the inning ended, Troup had sent 12 batters to the plate, and there were three hits, four walks, two hit batters, two errors and three wild pitches, and Callaway used three different pitchers.

Halcomb got things started with a leadoff double, and Bliss reached on a bunt, putting runners on first and third.

Halcomb scored on a wild pitch to make it 3-0, and when a pickoff throw went awry, Bliss trotted home with the fourth run.

After Cameron and Brandon Gay were both hit by a pitch to load the bases, Turner knocked in a run with a ground ball, and when the throw home got away, another run scored to make it 6-0.

Williams delivered an RBI single to push the lead to 7-0, and a Jarred Helton sacrifice bunt was sandwiched between walks to Colby Bridwell and Ken Truitt.

With the bags full, Halcomb walked to drive in a run, and Bridwell and Truitt both came around to score on wild pitches, and the lead was 10-0.

Troup capped the scoring in the top of the fifth.

After Helton and Truitt were each hit by pitches, Halcomb’s three-run shot gave Troup a 13-0 lead.

Two batters later, Cameron launched the ball the opposite way, and the ball banged off the scoreboard beyond the right-field fence for the solo home run.

Troup will look to make it two in a row when it visits Brookwood on Thursday, and Callaway will be on the road against Manchester today.

OF NOTE: For more photos from Tuesday’s game, go to facebook.com/LDNsports