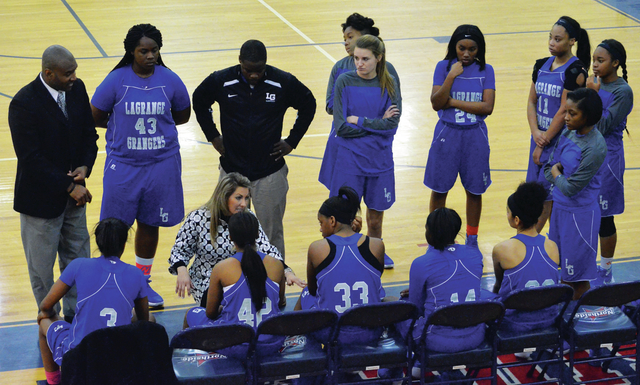 The LaGrange Grangers celebrate a Larkin Easterwood home run during Tuesday’s win over East Coweta. LaGrange is hoping to have more reason to celebrate in today’s game against Columbus. Kevin Eckleberry | Daily News

LAGRANGE – The Columbus Blue Devils may have a new head coach, but they look like the same dominant team they’ve been for decades.

During the 2015 season, long-time head coach Bobby Howard stepped down, and he is now leading the Central-Phenix City program.

Chad Mathis, who had been Howard’s top assistant, is now the Columbus head coach, and his team is off to a 7-0 start after beating Harris County 9-0 in its Region 1-AAAAA opener on Tuesday.

Today, Columbus will put that unbeaten record on the line when it visits the LaGrange Grangers.

It will be the region opener for LaGrange, which got an impressive 5-0 home win over East Coweta on Tuesday to improve to 5-3.

The Grangers have played a challenging schedule, and while there have been some bumps in the road, they have put together a winning record.

They finished their non-region schedule with a flourish, with Coy Tedescucci and Jake Howard combining for a shutout against a strong East Coweta team.

“It’s great to get some momentum going into region play,” said senior left-hander Jake Farrar, who could be in line to start today’s game. “We played really great, had a lot of energy.”

LaGrange will likely need to be at its best to beat a powerful Columbus team.

In the Harris County game, Cason Greathouse was 4-for-4, and he also delivered a dominant effort on the mound.

Blake Hicks and Jack Copley each hit home runs for Columbus, which banged out 13 hits in the game.

The Grangers and Blue Devils will play twice in two days, with the scene shifting to Columbus for Friday’s game.

There are seven teams in the region, and they will play each other three times, so each team will play a total of 18 region games.

The top four teams will qualify for the state playoffs.

Callaway and Troup will both open their region schedules next week.