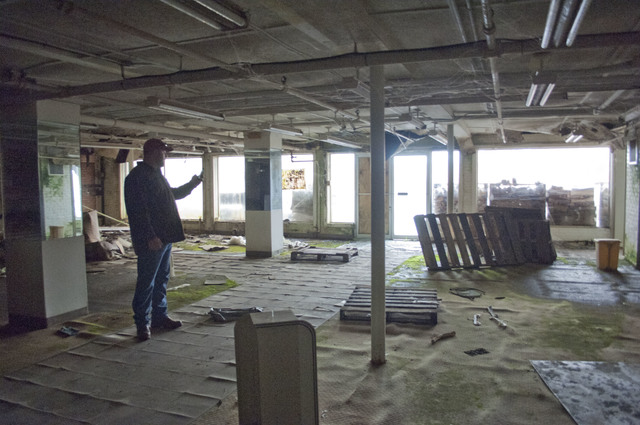 Bill Hubbard, of the asbestos-removal company Kadima, inspects the basement of the former Mansours department store building on Jan. 7. The building is slated for demolition to make way for a new hotel.

http://lagrangenews.com/wp-content/uploads/sites/37/2016/03/web1_HotelCost.jpgBill Hubbard, of the asbestos-removal company Kadima, inspects the basement of the former Mansours department store building on Jan. 7. The building is slated for demolition to make way for a new hotel.

LaGRANGE — The demolition of the former Mansours department store building on Lafayette Square is slightly behind schedule and will cost more than expected, officials said this week.

City Council on Tuesday approved nearly $22,000 in additional spending on demolition, bringing the city’s cost to $321,780.

Bobby Carmichael, director of the Downtown LaGrange Development Authority, which is working on the project, said the building was slated to be torn down by the middle of March, but now will likely begin in April.

The additional demolition costs stem from a new bid process, he added. The city initially committed $300,000 to tear down the building, but contractors are busier than when the money was first committed, increasing demand and driving up costs.

Carmichael said positive economic growth in the recovery from the Great Recession was driving more construction and raising costs.

“The economy is picking up, so everybody’s busy,” he said.

Although the cost of the demolition has increased, the estimate for asbestos removal has stayed flat, he added.

This isn’t the first setback in the downtown hotel project. For about 10 years, city officials have worked to attract a hotel downtown. Originally, a developer sought to build one at the corner of Main Street and Lafayette Parkway, west of the LaGrange Art Museum atop where a small park with the downtown flagpole sits. That idea was scrapped years ago after parking became a concern, Carmichael said.

About the same time, the Great Recession hit, along with the closing of the Mansours department store. City officials shifted their focus toward building a hotel in that location and the city bought the Mansours property in 2010 for $1.2 million.

A 200-space parking deck will also be constructed adjacent to the hotel. The deck will be owned by the city, but is being financed with a $4 million grant from the Callaway Foundation.

Taxes from the hotel are projected to provide the city with about $200,000 per year in tax revenue over the next 20 years, according to city officials. The hotel is expected to employ about 30 people and have about 100 rooms.