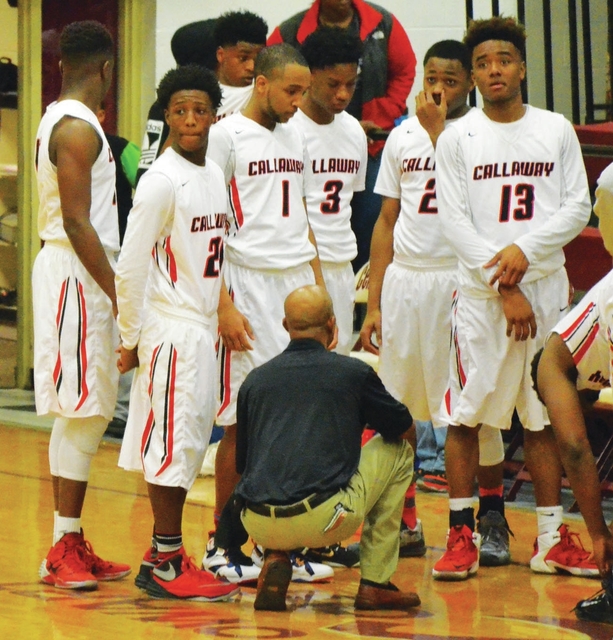 Callaway’s Josh Hanson gets a bunt down during Wednesday’s 11-1 win over Manchester. Hanson got it done at the plate, and on the mound with three shutout innings. Kevin Eckleberry | Daily News

http://lagrangenews.com/wp-content/uploads/sites/37/2016/03/web1_CHS3-11.jpgCallaway’s Josh Hanson gets a bunt down during Wednesday’s 11-1 win over Manchester. Hanson got it done at the plate, and on the mound with three shutout innings. Kevin Eckleberry | Daily News

Callaway’s Dre Martin races home during the third inning of Wednesday’s game. Martin was tagged out on the play, but the Cavaliers still scored three runs in the inning. Kevin Eckleberry | Daily News

http://lagrangenews.com/wp-content/uploads/sites/37/2016/03/web1_CHS2.jpgCallaway’s Dre Martin races home during the third inning of Wednesday’s game. Martin was tagged out on the play, but the Cavaliers still scored three runs in the inning. Kevin Eckleberry | Daily News

MANCHESTER – After a rough day at the office, the Callaway Cavaliers couldn’t wait to get back to work.

In Tuesday’s home showdown with the Troup Tigers, nothing went right for the Cavaliers, who lost 14-1.

One day later, Callaway was on the road against Manchester, and things went much more smoothly.

Josh Hanson and Hunter Rollins combined to get the job done on the mound, and the Cavaliers scored eight runs in the second and third innings combined on the way to an 11-1 win in a game shortened to six innings because of the run rule.

Callaway improved to 4-3, and it will host Heard County on Friday before beginning Region 5-AAA play next week against Harlson County.

“I’m excited for tomorrow just to practice, and to get after them, and then to play Friday,” Callaway head coach Dusty Hubbard said. “We’ll practice Monday, and then we start region play. And it’s time to go.”

Rollins, who pitched the final three innings against Manchester, said all of the players were eager to return to action following Tuesday’s disappointing effort.

“We needed to get back on the field,” Rollins said. “We needed a big win after last night, not playing real well. We handled it real well and came back tonight and won.”

Callaway finished off a season sweep of Manchester, and neither game was competitive.

On Feb. 25, Hanson and Rollins combined to no-hit Manchester in a 9-0 victory.

Manchester at least managed a few hits in the rematch, but the outcome was never in doubt.

After a scoreless first inning, Callaway pushed five runs across in the second inning, and it added three more in the third to build an 8-0 lead.

The Cavaliers notched a single run in the fourth inning, and they capped the scoring on a Ben Griffin two-run single in the sixth inning.

“I thought we had a much better approach at the plate,” Hubbard said. “We hit more balls (to the opposite field). We did a better job of staying behind the ball than we have in a while.”

Rollins, who had a base hit, said the hitters were committed to being disciplined at the plate.

“Even with the slower pitching, we focused on letting the ball get deeper, and hitting the ball to right field,” Rollins said. “That’s what we need to do the whole year.”

On the mound, Hanson and Rollins kept pumping in strikes, which is what Hubbard was looking for.

Oftentimes when the Cavaliers have struggled this season, the pitchers have had a hard time finding the strike zone.

It was a scoreless game in the top of the second when Hanson reached on an error to give the Cavaliers their first run, and Noah Hammett followed with an infield single to drive in another run.

Next up was Dylan Johnson, and he reached on an error allowing another run to score, and the Cavaliers exited the inning with a 5-0 lead.

After Hammett set Manchester down in order in the bottom of the second inning, Callaway went back to work in the top of the third.

Rollins started the rally with a base hit, and Drake Wade walked to put men on first and second with no outs.

Brandon Boddie then got a bunt down, and when the throw to third went awry, two runs scored to give Callaway a 7-0 lead.

With one out, Hanson struck out, but he made it to first when the ball got away from the catcher, and a run scored on the play to give Callaway an 8-0 lead.

In the fourth inning, Cortney Laye doubled and went to third on a Rollins groundout, and he scored on a Milton Turner sacrifice fly.

The Blue Devils scored a run on an error in the fourth inning to make it a 9-1 game, and that’s the way it remained until the top of the sixth.

After a one-out single by Laye, Rollins reached on an error to put two men on.

With two outs, Griffin came through with a base hit to drive in two runs, and Callaway had a 10-run cushion.

In the bottom of the sixth, Manchester had two men on with one out, but Rollins got a pair of strikeouts to end it.