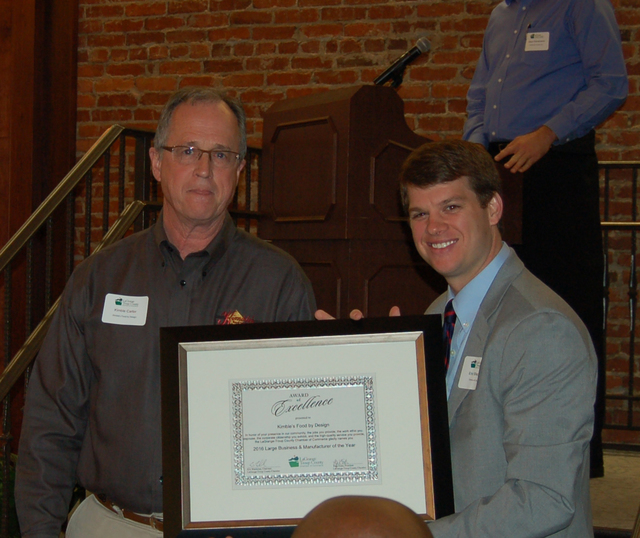 Tina Czerwinski of Caterpillar receives an award from LaGrange-Troup County Chamber of Commerce Chairman Eric Blackman during Tuesday’s Early Bird Breakfast, where the chamber recognized the 2016 large business/manufacturers of the year.

http://lagrangenews.com/wp-content/uploads/sites/37/2016/03/web1_Caterpillar.jpgTina Czerwinski of Caterpillar receives an award from LaGrange-Troup County Chamber of Commerce Chairman Eric Blackman during Tuesday’s Early Bird Breakfast, where the chamber recognized the 2016 large business/manufacturers of the year.

LaGRANGE — The LaGrange-Troup County Chamber of Commerce recognized the 2016 large business/manufacturers of the year at Tuesday’s Early Bird Breakfast.

An audience of more than 200 was on hand as Kimble’s Food by Design, Jindal Films and Caterpillar were honored for their accomplishments during the past year.

“The companies honored today are important components in the local economy. The chamber is proud to recognize their achievements and grateful for their contributions to our community,” said Eric Blackman, 2016 chamber chair.

Kimble’s Food by Design has grown from operating in the basement of a paint store at Lee’s Crossing to a multi-faceted food service provider employing more than 100 people. The business is technology-driven with the latest innovation producing 150,000 pieces of candy per week from its local production facility, chamber officials said.

Originally distributed only in Troup County, the product is currently being sold to more than 40 distributors in nine states and has a contract pending with one of the largest convenience store distributors in the nation that will place the product in 28 distribution hubs across the U.S., officials stated. With an estimated $17 million annual economic impact, the company contributes to the local community through its involvement with youth-oriented facilities, including the Georgia Sheriff’s Pineland.

Jindal Films has been a leading corporate partner in Troup County for 25 years, during which time they have never had a layoff, according to the chamber. Their commitment to their employees extends beyond the plant through their tuition reimbursement program available to any employee who chooses to pursue higher education opportunities.

The company also supports employee involvement in the community, principally in education. The plant currently partners with 12 local schools to provide volunteers, supplies and classroom speakers. The company is currently expanding to relocate its national headquarters and R&D facility in Troup County.

Caterpillar Forest Products is also expanding its global headquarters operations in Troup County. The division achieved record sales and produced more products in 2014 than ever before, according to the chamber.

Occupying more than 260,000 square feet for the past 18 years and employing more than 680, the company is partnering with West Georgia Technical College and THINC College and Career Academy to create a high school welding program and working with Georgia Tech on research and design projects.

The three award winners were chosen from a field of nominations reviewed by the chamber’s large business committee.