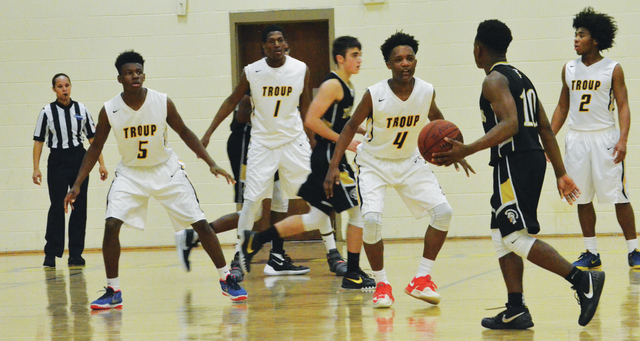 SNELLVILLE – It was another outstanding performance by Colby Williams, a freshman pitcher for the Troup Tigers.

In last week’s loss to East Coweta, Williams pitched scoreless baseball into the fifth inning before leaving the game, and he was back on the hill for Thursday’s road game against Brookwood.

In his second start of the season, Williams pitched three scoreless innings, and Payton Upchurch threw four superb innings of his own as Troup won 6-1 to improve to 5-2.

Troup head coach Craig Garner felt coming into the season that Williams could be a contributor on the pitching staff, and the freshman has made the most of his chances.

“He’s come in as a freshman and caught our attention pretty early on,” Garner said. “We knew he was going to be a very quality freshman. And he’s been given the opportunity, and he keeps proving himself. And he’ll get more opportunities.”

Upchurch has also been a key member of the staff, and he shut down Brookwood’s offense for four innings.

Upchurch was the winning pitcher in a big road win over Auburn on Feb. 25.

“He had the quality win against Auburn,” Garner said. “He looked very good tonight. Both of them did a great job.”

Troup scored the game’s first run in the top of the second, with Ryan Bliss walking with the bases loaded to drive in a run.

With two outs, Colby Darda, Ken Truitt and Bo Halcomb each singled to load the bases before Bliss walked.

Troup added another run in the fourth inning, with Winston Turner’s single bringing in Halcomb.

Troup extended its lead to 6-0 with four runs in the fifth inning.

Williams, showing he can get it done with the bat as well, had an RBI single to bring in Brandon Gay.

Later in the inning, Truitt successfully executed the suicide squeeze with the bases full to score another run, and Halcomb drove in a run with a sacrifice fly.

Brookwood scored its only run in the sixth inning.

“Tonight, we were just a well-rounded team,” Garner said. “Great pitching, good defense, and we were able to kind of get our offense going as far as utilizing everybody in the lineup. Everybody did their job, whether it was moving a runner over, or squeezing them in, or a sac fly.”

After dropping back-to-back games to East Coweta and Northside last week, Troup came back strong this week with blowout wins over Callaway and Brookwood.

Troup hopes the momentum carries over to the start of Region 5-AAAA play next week.

Troup will host the games on Tuesday and Thursday, and it will visit Woodward Academy on Wednesday.