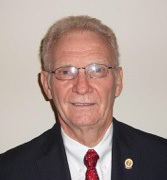 Church view: Shaking off the ‘vipers’ from the fires of life

As one follows Paul on his journey to Rome as a prisoner, they observe many things happening to him. There would be many trials awaiting him while in Rome.

One must remember that we are told in Acts 27:22-25 that Paul was comforted by an angel in the storm and was told, “Fear not, Paul; thou must be brought before Caesar: and, lo, God hath given thee all them that sail with thee. Wherefore, sirs, be of good cheer: for I believe God, that it shall be even as it was told me.”

In Acts 28:1-6 we have Paul shipwrecked and stranded on the island called Melita. All were alive as Paul had stated but kind natives, a warm fire and trouble ahead met them. Paul gathered a bundle of sticks, laid them on the fire only to have a viper out of the heat attack him.

“Vipers” often appear out of the fires of life. Times of trouble make you and me vulnerable, but God has a promise for the fiery times.

“When thou passest through the waters, I will be with thee; And through the rivers, they shall not overflow thee: When thou walkest through the fire, thou shalt not be burned; Neither shall the flame kindle upon thee.” Isaiah 43:2.

Paul shook off the viper when attacked, and so should we.

All of us will face the “viper of discouragement.” Our text points out that Paul was attacked while helping, that is, doing good.

“Vipers” often appear when we are doing those things that are right and good. How does Paul respond? He could have allowed this attack to make him doubt what God had promised. Instead, Paul shook off the viper, remembering God’s promise of safety.

God has promised, “Let your conversation (manner of life, character) be without covetousness; and be content with such things as ye have: for he hath said, I will never leave thee, nor forsake thee.” Hebrews 13:5.

Let God’s promise deliver you and shake off the “viper of discouragement.”

All of us will face the “viper of criticism.” Paul’s critics stated, “No doubt this man is a murderer.” Many are quick to judge and falsely accuse others.

“Judge not according to the appearance, but judge righteous judgment.” John 7:24.

Are we being wrongly judged, falsely accused? We are not the first to endure this kind of trail. Jesus was constantly criticized.

In Matthew 9:3 Jesus is called a blasphemer.

“And, behold, certain of the scribes said within themselves, This man blasphemeth.”

Also in Matthew 9:34, Jesus is accused of being in league with Satan, “But the Pharisees said, He casteth out devils through the prince of the devils.”

We need to remember how that Jesus responded to His critics.

“Who, when he was reviled, reviled not again; when he suffered, he threatened not; but committed himself to him that judgeth righteously…” 1 Peter 2:23.

Let us shake off the “viper of criticism” by looking to Jesus.

“Wherefore seeing we also are compassed about with so great a cloud of witnesses, let us lay aside every weight and the sin which doth so easily beset us, and let us run with patience the race that is set before us, Looking unto Jesus the author and finisher of our faith; who for the joy that was set before him endured the cross, despising the shame, and is set down at the right hand of the throne of God.” Hebrews 12:1-2.

All of us will face the “viper of low expectations.” The natives expected Paul to swell up and die. However, Paul lived! There are those who have low expectations of you and me as a Christian. There are people who believe that we will stumble and fall! They are waiting on you to go back to the world that is, back to the giving in to the lust of the eyes, the lust of the flesh and the pride of life.

Paul exhorts us, “I beseech you therefore, brethren, by the mercies of God, that ye present your bodies a living sacrifice, holy, acceptable unto God, which is your reasonable service. And be not conformed to this world: but be ye transformed by the renewing of your mind, that ye may prove what is that good, and acceptable, and perfect, will of God.” Romans 12:1-2.

Let us shake off the faithless conclusions of those who have the “viper of low expectations.”

Jesus came to give us “abundant life.” John 10:10. We need to remember, “Ye are of God, little children, and have overcome them: because greater is He that is in you, than he that is in the world.” 1 John 4:4.

We can have daily victory in spite of the opposition. The Word of God has equipped us to be winners!

Norm Fields Contributing columnist http://lagrangenews.com/wp-content/uploads/sites/37/2016/01/web1_Fields-Norm-CMYK-2.jpg There are many biblical words that we should study because of the frequency with which... read more