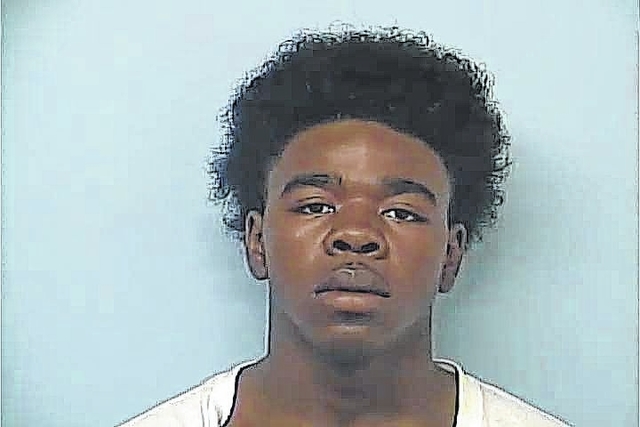 LaGRANGE — One of the men accused of shooting and killing a man on McGregor Street appeared before a Troup County Superior Court judge Friday afternoon to determine if he is competent to stand trial.

Christopher Louis Foster, 17, is charged with malice murder, felony murder, five counts of aggravated assault, possession of a firearm and violation of the street gang terrorism and prevention act.

Foster is one of four people accused of firing a gun that killed Tony Kennedy outside a home on McGregor Street on April 14, 2015.

Foster’s defense attorney, Christopher Wynn, told the court his client may not be competent to stand trial. He called Foster’s mother, Annie Jackson, to testify on her son’s behalf.

Jackson wiped away tears as she told the court Foster’s father was violent towards her and moved out of the home when Foster was about 6 years old.

She said her son was slow to learn, which quickly frustrated him.

“He would get upset if you would try to show him something and he didn’t get it right away … he would get real angry,” Jackson testified.

She also stated she was approached by school administrators when Foster was in elementary school.

“They said he needed counseling. He was slow … behind the rest of the children … but I never did take him (to counseling),” Jackson said.

According to Foster’s mom, the teen was held back two grade levels. He was 16 year old when he became a freshman at Callaway High School and was expelled a month after starting school for getting in trouble and not completing his work, Jackson stated.

Wynn asked her if she felt her son understood why he was in jail.

“I don’t feel like he really knows what’s going on,” she replied tearfully. “I talk with him once every week.”

Foster smiled at his mom.

Jackson admitted Foster had not discussed the case with her when they spoke, only asked how she was doing.

She also said the teen was sent to Hope Academy, an alternative school within the Troup County School System, for disciplinary issues. Jackson admitted Foster never received counseling, was never diagnosed with mental health issues or given any medication for them.

Wynne testified he interviewed Foster, read him his Miranda Rights and reviewed the facts of the case with the teen. The detective stated Foster seemed to comprehend everything going on.

“There were several of us (LPD detectives) that interviewed him. I watched all of them, and at no time was there any question as to what we were talking about,” Wynne told the court.

But Foster’s defense attorney explained to presiding Judge Travis Sakrison he believed his client should be evaluated by a health professional before heading to trial.

“My main concern is that he be able to relate enough information to me to be able to assist him in this case,” Christopher Wynn stated.

Himes stood firm and argued the defense showed no evidence proving Foster was mentally incapable of standing trial — instead, believing the act was a ploy by the defendant.

” … It sounds to me like he (Foster) has a discipline problem. He was sent to Hope Academy … we have no other documentation to prove otherwise,” Himes told the court. “You heard from Detective Wynne, (Foster) had no problem understanding him while being interviewed … but he has an interest to now feign some sort of issue, because, ‘Oops, I confessed to shooting this man.’ Your Honor, we oppose this motion by the defense.”

After listening to both sides, Judge Sakrison opted to err on the side of caution.

“I think this is too important of a case not to get it right,” he stated. “So I am going to order the evaluation for Mr. Foster.”

The case against Foster and his co-defendants Cherise Newton, Tyler Dunson and Cordarius Collier was scheduled to go to Troup County Superior Court in July.

It is uncertain if Foster’s mental evaluation will push that date back.