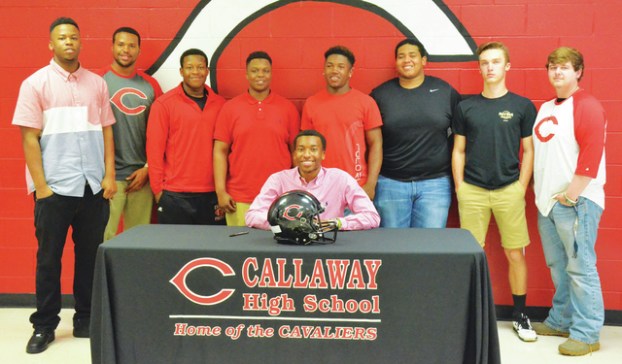 Callaway’s Tyrek Frazier was joined by some of his football teammates during Friday’s ceremony. Kevin Eckleberry | Daily News

http://lagrangenews.com/wp-content/uploads/sites/37/2016/03/web1_frazier2.jpgCallaway’s Tyrek Frazier was joined by some of his football teammates during Friday’s ceremony. Kevin Eckleberry | Daily News

HOGANSVILLE – He’s getting his shot.

Tyrek Frazier, who was a standout cornerback for the region-champion Callaway Cavaliers last season, has signed a letter of intent to play college football at Campbellsville University in Kentucky.

Frazier watched some of his teammates announce their college destinations on national signing day in February, but he wanted to wait and make sure he made the right decision.

“I just looked at all of the available options I had,” Frazier said. “I didn’t want to rush my decision. I just kind of took my time, and I felt like this was the right time.”

Frazier announced his decision during a ceremony at the school on Friday with friends, family members, teammates and coaches there to share the moment with him.

“It’s a special day,” Frazier said. “I’m thankful, and I appreciate everybody coming out.”

Callaway head coach Pete Wiggins, who watched Frazier develop as a player over the past four years, is thrilled to see him get this opportunity.

“Tyrek is a great kid, and he’s worked extremely hard,” Wiggins said. “He paid his dues. He was a scout-team running back for a couple of years. He played JV for a couple of years. He kept working, and he developed into one of the best corners we’ve ever had. Coach (Dusty) Hubbard was really complimentary of him throughout the season and how physical he played. I’m really proud of him. He’s such a great representation of Callaway High School.”

Wiggins always encourages his players to take their time when it comes to choosing a college, and he feels Frazier made a great decision.

“He had several opportunities, and we went to several places,” Wiggins said. “He found the right fit, and that’s what it’s important.”

Frazier was not only a lock-down cornerback for the Cavaliers, but he was also a backup running back the past few seasons, first to Eddie Culpepper, and then to Cedric Maynard last season.

He was a part of some special moments as a Cavalier.

During his four years on the team, Callaway won three region championships and advanced to the state semifinals in 2013.

As much as he’ll miss being a Cavalier, Frazier can’t wait to begin his college career.

“I’m real excited,” Frazier said. “Everybody doesn’t get this opportunity. It’s a blessing.”