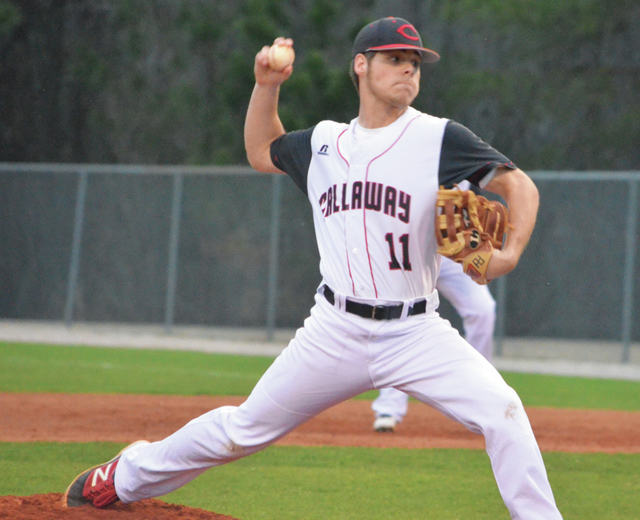 Callaway’s Josh Hanson did some solid work in relief and was the winning pitcher in Friday’s game. Kevin Eckleberry | Daily News

http://lagrangenews.com/wp-content/uploads/sites/37/2016/03/web1_baseball3.jpgCallaway’s Josh Hanson did some solid work in relief and was the winning pitcher in Friday’s game. Kevin Eckleberry | Daily News

HOGANSVILLE – The Callaway Cavaliers will head into their region schedule with some momentum.

The Cavaliers broke open a tie game with four runs in the bottom of the fifth inning, and they went on to claim an 8-4 home victory over the Heard County Braves on Friday.

It was the second straight win for Callaway (5-3), which will play its Region 5-AAA opener against Haralson County on Tuesday.

Heard County pushed a run across in the top of the fifth inning to pull even, but Callaway answered right back in the bottom of the inning with four runs of its own.

Hunter Rollins had the big blow in the inning for Callaway, a base hit with the bases loaded that brought in two runs.

That was part of a productive night for Rollins, who also had an RBI single in the third inning while holding down the catcher position.

“I thought Hunter Rollins had a great game,” Callaway coach Dusty Hubbard said. “I thought he played probably his best game since he’s been here. He was good behind the plate. He got some big hits. He kind of brings an energy when he plays like that.”

Josh Hanson, who entered the game in relief of Dylan Johnson in the third inning, was the winning pitcher, and Slone Raper tossed two scoreless innings to finish the game.

“I thought Josh threw the ball well, and Slone was really good,” Hubbard said. “He did a great job shutting it down.”

Callaway struck first, scoring a pair of runs in the bottom of the second to take a 2-0 lead.

Ty McCann led off with a double, and Drake Wade had a clutch two-out, RBI single later in the inning.

Heard County answered with three runs in the top of the third, with Hanson getting a groundout to end the inning after coming into the game.

Callaway answered with two runs in its half of the third.

After Johnson walked and Cortney Laye reached on an error, McCann had an RBI groundout, and Rollins followed with a run-scoring single to put the Cavaliers back on top.

Heard County pulled even with a run in the fifth inning and it had the bases loaded, but Hanson got a popout to end that threat.

In the bottom of the fifth, Callaway got it done with two hits, three walks, and a hit batter.

Brock was hit by a pitch leading off, and Johnson legged out an infield single with one out.

After Brock scored on a wild pitch, Laye and McCann both walked to load the bases, and Rollins punched the ball into the outfield to plate two more runs.

Raper had a sacrifice fly to bring in the inning’s fourth and final run.

Raper then went to the mound and tossed a pair of shutout innings to finish it.