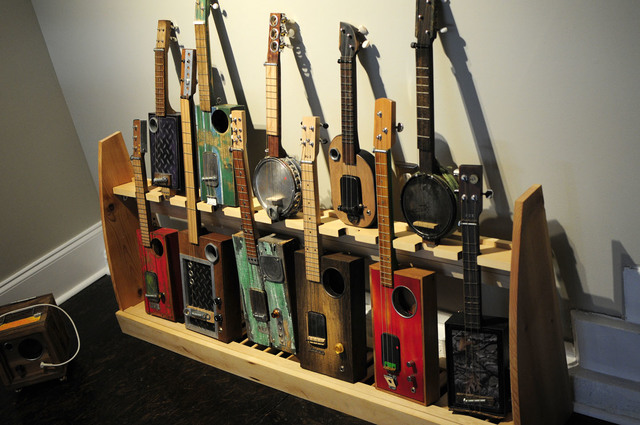 Sarah Swanson, owner of The Suffering Artist Studio at 311 E. Main St. in Hogansville, talks about one of her drawings on display for the exhibit ‘In Tandem.’ Swanson opened the gallery Feb. 26 after more than a year of work on the downtown building.

http://lagrangenews.com/wp-content/uploads/sites/37/2016/03/web1_web0314SufferingArtist1.jpgSarah Swanson, owner of The Suffering Artist Studio at 311 E. Main St. in Hogansville, talks about one of her drawings on display for the exhibit ‘In Tandem.’ Swanson opened the gallery Feb. 26 after more than a year of work on the downtown building.

Homemade guitars and other stringed instruments with working electronic connections are on display and for sale at The Suffering Artist Studio in Hogansville. The instruments were created by Matt Scarborough, brother of gallery owner Sarah Swanson.

http://lagrangenews.com/wp-content/uploads/sites/37/2016/03/web1_web0314SufferingArtist2.jpgHomemade guitars and other stringed instruments with working electronic connections are on display and for sale at The Suffering Artist Studio in Hogansville. The instruments were created by Matt Scarborough, brother of gallery owner Sarah Swanson.

HOGANSVILLE — Despite having suffering in its title, The Suffering Artist Studio is a work of joy.

The gallery, which opened its doors Feb. 26 in downtown Hogansville, is the passion project of Sarah Swanson. A full-time nurse in her “day job,” Swanson had a lifetime interest in art and has a bachelor’s degree from Augusta State University.

“It’s always been my first love,” she said last week as she sat in the work area at the back of the gallery.

Scattered on the floor of the work space are newspapers sitting underneath works in progress next to old Popular Mechanics magazines, which she uses for collage work. It’s Swanson’s space to create without worrying about anything else.

“For years my house has been my studio, and it really gets junky because I’ve got more artwork than I know what to do with, and stuff like this would be in my dining room or office or whatnot,” she said. “And (owning a studio has) always been a dream of mine, too.”

Swanson’s decision to open the gallery was almost on a whim. She and a friend were walking through downtown one day when her friend pointed out an open space in one of the buildings.

“So my friend and I walked by and she was like, ‘You know, you should put an art gallery in there,’ and I was like, ‘Hmm, I think I’ll do that,’” she recalled.

The initial space, which is across the street from where the gallery now sits, didn’t suit her needs, but the real-estate agent showed her the gallery’s current spot, a 1890s-era construction that came at a more affordable price for Swanson.

The building “looked real ratty,” Swanson admitted, “but I could see it had real potential.”

She and her husband, Chris, closed on the space in January 2015. It took them more than a year to get the gallery prepared.

“We found a lot of surprises, things we weren’t expecting,” Swanson said.

After taking down the drop ceiling, the couple discovered bowed and breaking crossbeams that needed to be replaced. The original brick walls also were more fragile than they realized, crumbling under the weight of the beams, and further challenged their reconstruction efforts.

“We were covered in sweat and dust, but I think it was totally worth it,” she said. “And the bricks are a nice touch.”

The gallery opened Feb. 26 with a packed house for the ribbon cutting ceremony.

The first exhibit on display at the gallery now through the end of the month is “In Tandem,” which shows Sarah Swanson’s works and refers in part to her and her husband’s journey to open the gallery. The exhibit also features a series of drawings with Sarah Swanson’s sister and her fiance in various situations.

Swanson works primarily in graphite drawings from posed photographs of people she knows.

“Some of the things I have them (the models) do — it’s some kind of strange settings that they’re in, and you have to be kind of brave to be my model,” she said with a laugh.

She pointed out one drawing of a friend whom Swanson is pouring oil on. For that, she and the friend had to setup the shot in a shower and her husband snapped photos as Swanson doused her subject in oil.

The gallery is open for the public to peruse, and there are works for sale, which also includes pieces by her brothers. Brother Ben Scarborough crafts small wooden figurines and brother Matt Scarborough creates out of old boxes and items stringed instruments with working electronic plugins to hook into an amplifier, which he also makes out of household materials.

In April, a new exhibit at the gallery will feature two Hogansville artists. Scarborough also has exhibits planned for the next several months, as well as Halloween and Christmas activities. She hopes to also make the gallery an event space for rent, and may offer art lessons and commissioned drawings.

“We are excited to be in Hogansville, we look forward to working with the community and promoting the arts and happy to do it in this beautiful building,” Swanson said.

And, “if no one walks through the door, I won’t go out of business,” she added. The gallery is her dream space and the cost is enough for her to cover with her nursing job, so she intends to keep it going.

“We just want to have a good time and let people that want to experience fine arts or culture have that in their lives,” she said. “I think that it’s kind of neat that opening night, one of the people from the hospital came to support me, and it was just wonderful and they said they had never been to something like this — an opening art show. So, I’m real happy that — first, that they were so supportive and so brave to try something they had never tried before, and second, that they enjoyed it and looked at this as some new way that they can spend their time.”

The Suffering Artist’s hours vary due to Swanson’s nursing schedule. To see when it is open, check the gallery’s Facebook page at facebook.com/thesufferingartist for a weekly schedule.