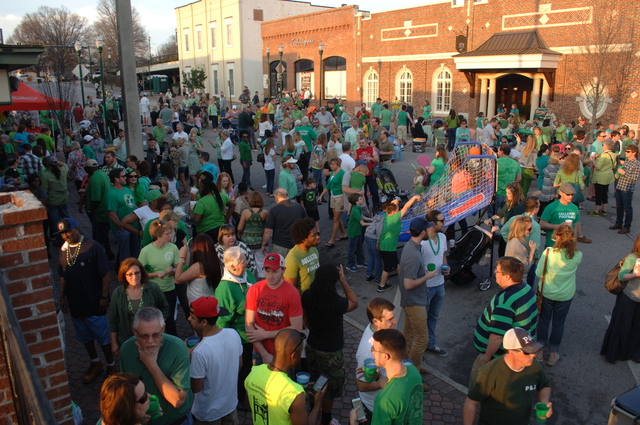 Bull Street between Vernon and East Broome streets will close 6 to 10 p.m. for live music, dancing and games. The event is free and open to the public.

“We had a great turnout last year. I think we had about 800 people come out,” said Barbie Watts of the Downtown LaGrange Development Authority, which sponsors the event. “We want everybody to wear their green and come celebrate Saint Patrick’s Day in downtown LaGrange.”

Watts said she’s hoping the temperate weather that has graced the area will continue through Thursday.

“The weather has been so nice, and we’re hoping that stays,” she said. “Everybody has spring fever and is ready to get outside and have some fun.”

AccuWeather forecasts Thursday as partly sunny with a high of 77 and a low of 50 degrees.

The event will feature live Irish-style dancers from the Celtic Traditions dance studio in Opelika, Alabama, and the band Mr. Terrific, which Watts described as “party music.”

“I think they cover a lot of people’s types of music,” she said. “They’re fun.”

Cornhole games, airbrush tattoos, snow cones and a photo booth will also be on hand for entertainment. Food may be purchased from downtown restaurants, and food from Mighty Joe’s Pizza will be for sale, Watts added.

A special event permit will allow Mar Sol and Idle Hour Pub restaurants to sell alcohol that may be taken outside into the street, as long as the beverage stays within the designated special event zone, Watts said. People are not permitted to bring their own alcohol to the the event; it must be purchased at one of the two downtown restaurants.

Tables for eight people can be reserved for $25 by calling Watts at 706-298-4534. She requests people make reservations no later than Wednesday.