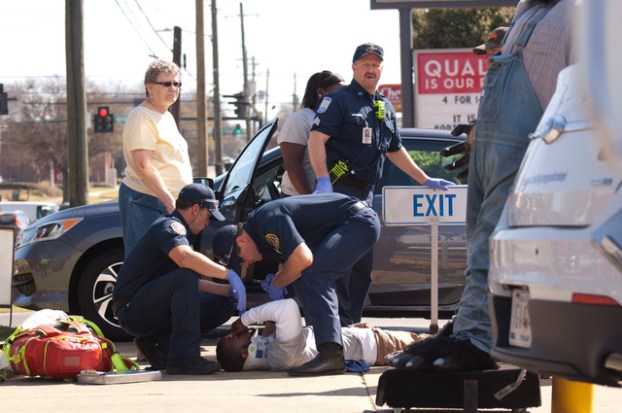 Two employees of LaGrange Car Wash at 307 Vernon St. were hurt when a pickup truck driven by another employee accelerated and struck another car waiting in line, according to Senior Officer Wesley Engle of LaGrange police.

One employee walked into an ambulance and the other was taken by stretcher. A single ambulance took both men to West Georgia Medical Center, Engle said. Their conditions and identities were unavailable at press time. Both men were conscious when transported.

A witness who identified herself as the pickup truck’s owner, Marilyn Williams of Grove Hill, Alabama, said she saw the truck pull beneath an awning in front of the car wash when the it sped up and hit a Honda Accord that was parked in front of it, toward the car wash’s exit.

Williams said the employee who was driving the car told her the brakes failed. Engle, who works with the traffic division of the police department, said he inspected the pickup truck’s brakes twice and they were operational.

Police issued no citations because the crash happened on private property.

Greg Pitts, the car wash’s owner, said the employee who was taken to the ambulance by stretcher had worked at the car wash “for some years,” and added that in his 29 years of running the business, he’d never had a similar accident.