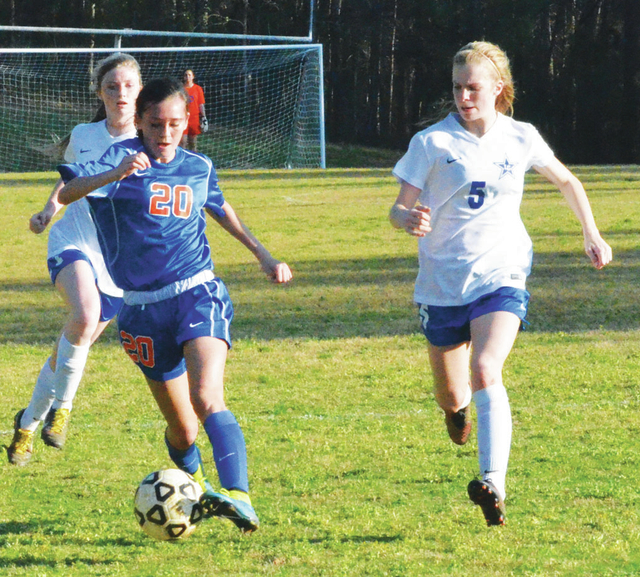 The Columbus Blue Devils got past the LaGrange Grangers 5-0 on Monday in a Region 1-AAAAA showdown. Kevin Eckleberry | Daily News

http://lagrangenews.com/wp-content/uploads/sites/37/2016/03/web1_soccer1-1.jpgThe Columbus Blue Devils got past the LaGrange Grangers 5-0 on Monday in a Region 1-AAAAA showdown. Kevin Eckleberry | Daily News

LaGrange’s Lindsey Woodham tracks down the ball during the second half of Monday’s 3-0 loss to Columbus. Kevin Eckleberry | Daily News

http://lagrangenews.com/wp-content/uploads/sites/37/2016/03/web1_soccer7-1.jpgLaGrange’s Lindsey Woodham tracks down the ball during the second half of Monday’s 3-0 loss to Columbus. Kevin Eckleberry | Daily News

Players for LaGrange and Columbus fight for position during the second half of Monday’s game. Kevin Eckleberry | Daily News

http://lagrangenews.com/wp-content/uploads/sites/37/2016/03/web1_soccer2.jpgPlayers for LaGrange and Columbus fight for position during the second half of Monday’s game. Kevin Eckleberry | Daily News

LaGrange’s Ellie Doerr chases down a Columbus player during the second half. Kevin Eckleberry | Daily News

http://lagrangenews.com/wp-content/uploads/sites/37/2016/03/web1_soccer8.jpgLaGrange’s Ellie Doerr chases down a Columbus player during the second half. Kevin Eckleberry | Daily News

LAGRANGE – It wasn’t the start they were hoping for.

LaGrange High boys’ soccer coach Keita Placide knew it was going to be an uphill battle against a strong Columbus team on Monday, and he felt it was important for his team to get off to a quick start.

Instead, it was Columbus taking control early, and it ended up winning the Region 1-AAAAA showdown 5-0.

Also on Monday, the state-ranked Columbus girls’ team got a pair of second-half goals to break open a close game and beat LaGrange 3-0.

In the boys’ game, Columbus was ahead 3-0 at the half, and it was able to add to the lead in the second half.

“They were a really quality team,” Placide said. “We fell behind by three, and couldn’t do anything. We are still injured. But there’s no excuses. They’re a good team, and we didn’t measure up. That’s how the cookie crumbles.”

The biggest highlight for LaGrange came late in the second half when senior Matthew Thomas was able to get some playing time at goal keeper, and he made a couple of nice saves.

Thomas, a standout defender for the Grangers, had been lobbying to get a chance to play in goal, and Placide figured the time was right.

Thomas received a nice ovation when he put on the goal keeper’s jersey.

“I had to reward him,” Placide said. “He’s been a good captain all year. We thought we’d let him have a little fun.”

The Grangers fell to 0-2 in the region, but they’re still right in the mix to earn one of the region’s four state-playoff berths.

LaGrange could take a big step toward securing a state bid with a home win over Harris County on Wednesday.

“Hopefully we’ll do better,” Placide said. “We’ve got Harris coming in Wednesday. That’ll be a dog fight. Hopefully we can get a win under our belt. We only need two (region) wins to propel us to state.”

In Monday’s girls’ game, it was tight at the half, with Columbus clinging to a 1-0 lead.

Columbus scored the all-important second goal with 31:05 left in the game, and it added an insurance goal with 7:17 to play.

LaGrange came close to getting on the scoreboard with a little more than six minutes to play, but a Katelyn Peters header off of a corner kick just missed.

“You could tell they were a little deflated after goals two and three,” LaGrange coach Andy Fritchley said. “But they snapped out of it and kept playing, and that’s all you want. You keep competing.”

LaGrange, which lost to Northside on penalty kicks earlier this month, fell to 0-2 in the region with Monday’s loss.

“The girls are doing their best to keep their heads up,” Fritchley said. “The simple fact is, we haven’t won a game in region. There are only so many moral victories you can get out of that. But to play a team like Columbus, and they’re ranked third in the state, to 3-0, it does show you where our program has come.”

Next up for LaGrange will be Wednesday’s region home game against Harris County.

A win would put the Lady Grangers in great position to make a run at a state-tournament berth, and Fritchley said the players will “come out and give them everything we’ve got. We’ll throw the whole arsenal at them.”