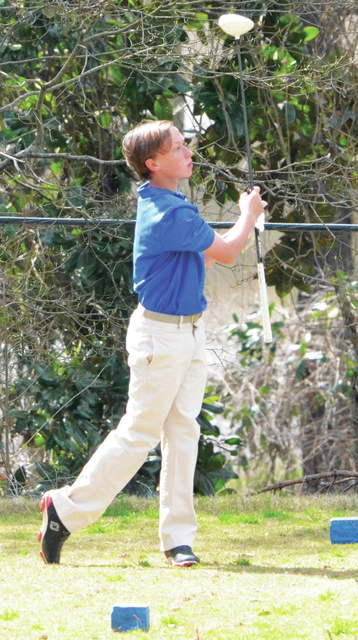 LaGrange High’s Preston Pelham lines up a putt during Monday’s LaGrange Invitational that was held at Highland Country Club. Pelham shot an 84, which was his team’s best score. Kevin Eckleberry | Daily News

http://lagrangenews.com/wp-content/uploads/sites/37/2016/03/web1_golf-pelham.jpgLaGrange High’s Preston Pelham lines up a putt during Monday’s LaGrange Invitational that was held at Highland Country Club. Pelham shot an 84, which was his team’s best score. Kevin Eckleberry | Daily News

LAGRANGE – On a picture-perfect spring afternoon, it was the Northgate golf team taking top honors in the LaGrange Invitational at Highland Country Club on Monday.

Northgate posted a team score of 307 to finish six strokes ahead of the second-place finisher, Brookstone.

Brookstone’s Walker Hinds, who shot a 1-under par 71, was the individual low medalist.

LaGrange, the host team, had a team score of 372, with Preston Pelham leading the way with an 84.

“We struggled,” LaGrange coach Thomas Crocker said. “We knew it was a strong field. We knew there were some really good teams. Again, it’s our first tournament for most of our players. And it was windy conditions. We’ve just got to do a better job of finishing holes. We made so many mistakes around the green. But the kids are excited, and they’re working hard.”

Crocker said everything went smoothly with the 10-team tournament, and he gave a lot of credit for that to Highland Country Club head pro Todd Ormsby, as well as to the parents of the players.

“I wanted to really thank the members of Highland Country Club for letting us put on this tournament, and Todd Ormsby the head pro has just been a phenomenal help to our program, and for helping run this tournament,” Crocker said. “And the parents of my golfers, with all the work they put in helping this tournament run smooth, without them, we couldn’t do something like this, and that’s really big.”

TENNIS: LaGrange High’s boys’ and girls’ teams had no trouble with Carver on Monday.

In the girls’ match, LaGrange won 5-0, and Carver had to forfeit four of the matches.

In the only match that was contested, it was Kaylee Key and Lizzie Wilkerson winning 6-2, 6-0.

Euna Oh, Abigail Brock and Abbi Lynn Lanier won their singles matches by forfeit, as did the doubles team of Kinsleigh Stephens and Elise Lee.

Blade Kendall fell short at number one singles, but LaGrange won the other four matches.