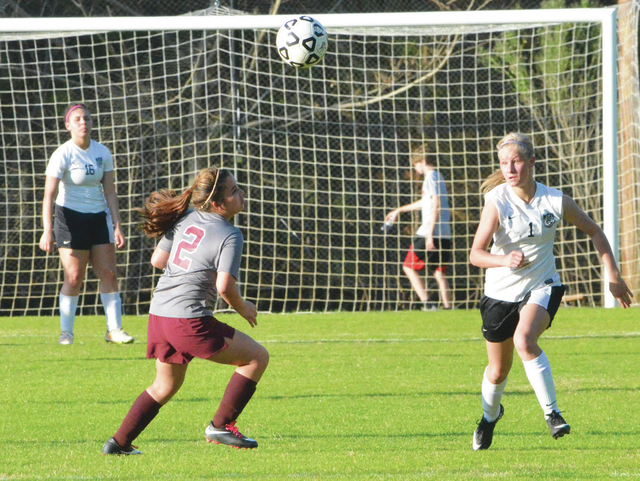 Callaway’s Cameron Spinks fights for the ball during the first half of Tuesday’s 5-1 Region 5-AAA win over Central-Carroll. Kevin Eckleberry | Daily News

http://lagrangenews.com/wp-content/uploads/sites/37/2016/03/web1_soccer7-2.jpgCallaway’s Cameron Spinks fights for the ball during the first half of Tuesday’s 5-1 Region 5-AAA win over Central-Carroll. Kevin Eckleberry | Daily News

Callaway’s Brianne Vaught controls the ball during the second half of Tuesday’s game against Central-Carroll. Vaught scored her team’s lone goal in a 2-1 loss. Kevin Eckleberry | Daily News

http://lagrangenews.com/wp-content/uploads/sites/37/2016/03/web1_soccer23.jpgCallaway’s Brianne Vaught controls the ball during the second half of Tuesday’s game against Central-Carroll. Vaught scored her team’s lone goal in a 2-1 loss. Kevin Eckleberry | Daily News

HOGANSVILLE – The Callaway Cavaliers picked an ideal time to play what their coach considered to be their best game of the season.

Facing visiting Central-Carroll in a Region 5-AAA soccer showdown on Tuesday, Callaway rolled to a 5-1 victory.

After dropping their region opener to Cedartown, Callaway has won its past two region games to improve t0 2-1.

“I’m very pleased,” Callaway coach Jake Hembree said. “We have a few small things to fix, but overall, that was our best performance so far.”

Callaway and Central-Carroll have had some close, hard-fought games over the past few years, so Hembree was expecting a big-time challenge on Tuesday.

“They’re always a pretty good team,” Hembree said. “We know that they’re going to bring good competition. We have to step up whenever we play them.”

The Cavaliers did that.

They surged to a 3-0 lead at the half, and they continued to dominate the action in the second half on the way to the one-sided win.

Grayson Lambert, who has found the net often this season, led Callaway with two goals, and Cameron Spinks and Noah Hill had one goal apiece.

Callaway’s other goal came when a Central-Carroll player accidentally kicked the ball into his own net at the start of the second half.

Hembree said Spinks has been an outstanding team leader all season.

“He really showed what a true captain is by leading the team and stepping up,” Hembree said. “He did very well. I was really proud of him.”

Callaway’s defense was outstanding, and when Central did get a shot away, goal keeper Hugo Lopez was up to the challenge.

The Cavaliers didn’t have any stability at the goal keeper position last season, so Hembree is happy to see Lopez doing so well this spring.

“Our keeper, Hugo, played a heck of a game,” Hembree said. “That kid has come so far. He has really stepped up.”

Hembree said Lopez prevented one goal with a tremendous save.

“He had a save that absolutely blew me away,” Hembree said. “I didn’t think he would get to it, and he somehow managed to get a hand on it and pop it over the net. It was a beautiful save.”

The Cavaliers will look for a third consecutive region win when they host the Rockmart Yellow Jackets on Thursday.

“We’re sitting at 2-1 in the region, and we have Rockmart Thursday, which should be a pretty good match as well,” Hembree said.

In Tuesday’s girls’ game, Callaway took a 1-0 lead early in the second half, but Central-Carroll rallied for a 2-1 victory.

It was the first loss of the season for the Lady Cavaliers, who are now 3-1 in region play.

Although the Lady Cavaliers came up short for the first time, head coach Kristen Clonts was extremely proud of the way her short-handed team performed against a strong Central-Carroll club.

One of the players who was out was leading scorer Savannah Thompson, who is nursing an ankle injury.

“They played very well,” Clonts said. “We were down like four players tonight. Savannah is still hurt with an ankle injury. I think they’ll be back when we play (Central-Carroll) again in April.”

After a scoreless first half, Brianne Vaught put Callaway on top with a goal early in the second half.

That’s the way it remained until Central-Carroll scored on a penalty kick with 24:19 to play to tie it.

Central kept the pressure on, and one of its players got a great look at the goal with a little more than eight minutes remaining, but Callaway’s Marlowe Vansant made a tremendous save to keep the game tied.

“Our keeper, she was hanging in there tonight,” Clonts said. “She was on the ball tonight. She’s been growing into that position.”

With 3:50 to play, Central-Carroll broke through for what turned out to be the game-winning goal.

“It hurts. It’s not a fun feeling,” Clonts said. “But I’m not upset with them. They played hard. For it to be our first loss, it was a good game.”

Callaway will look to improve on its region record when it hosts Rockmart on Thursday.

Those two teams played earlier this season in Rockmart, and it was tied 4-4 in the second half when the game was postponed because of severe weather.

OF NOTE: For more photos from Tuesday’s games, check out facebook.com/LDNsports