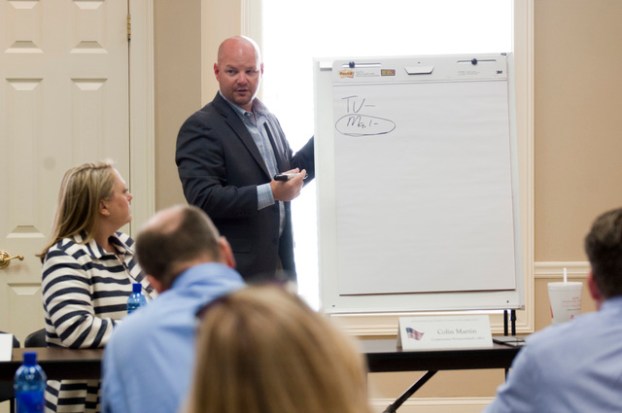 Jay Walker, a campaign strategist, gives advice during a candidate workshop at the LaGrange-Troup County Chamber of Commerce on Monday evening.

http://lagrangenews.com/wp-content/uploads/sites/37/2016/03/web1_WorkshopCMYK.jpgJay Walker, a campaign strategist, gives advice during a candidate workshop at the LaGrange-Troup County Chamber of Commerce on Monday evening.

Jay Walker, a campaign strategist, gives advice during a candidate workshop at the LaGrange-Troup County Chamber of Commerce on Monday evening.

http://lagrangenews.com/wp-content/uploads/sites/37/2016/03/web1_WorkshopWEB.jpgJay Walker, a campaign strategist, gives advice during a candidate workshop at the LaGrange-Troup County Chamber of Commerce on Monday evening.

LaGRANGE — Candidates who qualified to run for local offices last week may have realized just what they’d gotten themselves into Monday night.

At a workshop at the LaGrange-Troup County Chamber of Commerce, a panel of campaign strategists and elected officials offered their best advice on how to win votes.

About 20 people attended the workshop, held at the chamber office on Bull Street, where they learned about what works and what doesn’t when running a local campaign.

An overarching theme of the evening was campaigning takes time.

“Running a campaign takes not only your time, but your family’s and asking your friends to step up to the plate and help,” panelist and Mayor Jim Thornton told candidates. “And you’ll need a message, manpower and money. You have to have a message — that’s why you’re running.”

The mayor also noted the financial aspect of campaigning.

“These things (campaigns) are expensive,” he said. “It’s going to take a lot of money, particularly in a time when not everyone reads the newspaper or is using Facebook. … Elections are math problems. You need 50 percent of the vote, plus one. Never be afraid to ask for someone’s vote.”

“Keep copies of everything, have a treasurer who keeps an ongoing list of donors,” he advised.

Local candidates must file regular updates with the county’s elections board. Any donation of more than $100 must be disclosed. The next deadline for such a filing is March 31.

Of course, there couldn’t be a candidate campaign workshop without talking about yard signs.

Although they’re a necessary part of the process, less than 2 percent of any given candidate’s actual vote comes from the signs, estimated Walker.

“People won’t vote for you just because of a sign,” he said. “They want substance.”

Thornton reminded candidates that the city has an ordinance against placing signs on public right-of-way, and that city workers will call campaigns and remind them of that before going and collecting them.

More than signs or any other kind of advertising, the panelists recommended candidates try direct mail to reach voters.

“Mail is the only way I know that I can get something directly into your box and into your hand,” Walker said.

Markette Baker, another panelist and three-term county prosecutor, said that while direct mail can be helpful, nothing beats a personal phone call.

She said she made dozens of calls during her campaigns and enjoyed talking with voters and learning their thoughts on issues.

In the end, though, panelists can give their advice, but it will be up to candidates to convince voters who’s right for the job.

Page Estes, chamber president, said she and her organization were proud to hold the workshop and encouraged by the attendance.

“With so many people here, this shows that our democracy is working and people are engaged,” Estes said.

The chamber is working with the local Democratic and Republican parties to organize candidate forums in the coming weeks. Dates and locations will be announced once plans are finalized, Estes said.