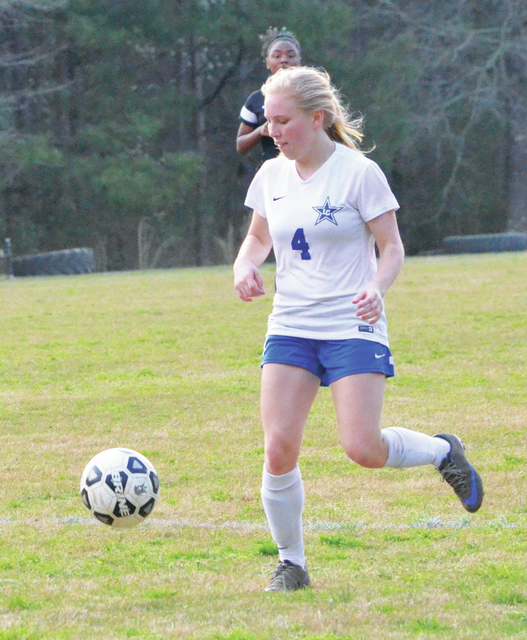 LaGrange’s Katelyn Peters fights for control of the ball during Wednesday’s game. Peters scored a goal in the 6-0 win. Kevin Eckleberry | Daily News

http://lagrangenews.com/wp-content/uploads/sites/37/2016/03/web1_soccer23-1.jpgLaGrange’s Katelyn Peters fights for control of the ball during Wednesday’s game. Peters scored a goal in the 6-0 win. Kevin Eckleberry | Daily News

LAGRANGE – They knew they were close.

Although the LaGrange Lady Grangers came into Thursday’s home soccer match against Harris County without a region win, they’d played well in losses to Northside and Columbus.

LaGrange lost to Northside on penalty kicks after neither team scored in regulation or overtime, and it fell to a powerful Columbus team 3-0, and that was a 1-0 game at the half.

So even though the Lady Grangers arrived at Gardner-Newman’s stadium on Wednesday with an 0-2 record in Region 1-AAAAA play, they were confident the wins were going to come, especially after the strong showing against Columbus on Monday.

“That’s the closest we’ve been against Columbus in a long time,” senior Ellie Doerr said. “Last year, we got demolished I think 8-1. So we knew coming off of that game that we could definitely tackle this one.”

With senior Reagan Peters finding the goal five times, LaGrange (5-5 overall) blanked Harris County 6-0 to improve to 1-2 in the region.

With three winnable games upcoming in the region, LaGrange is in great shape to earn a state-playoff berth.

“Getting a region win was huge for us,” Doerr said. “After losing to Columbus and Northside, we knew this was a big game to get us into the playoffs. So we definitely took it seriously, and I think the score shows that.”

Peters, who will be going to Kennesaw State to play soccer, had her way with Harris County’s defense.

Peters scored three goals in the first half as LaGrange built a 4-0 lead, and she found the net twice more in the second half, giving her a five-goal performance.

LaGrange’s other goal was provided by freshman Katelyn Peters, who scored in the first half.

LaGrange’s defense was dominant, keeping Harris County from getting any good looks at the goal.

“It was definitely a relief,” Reagan Peters said of getting the breakthrough region win. “It was really reassuring to know we’re closer to a playoff spot. It’s really helpful to get the win.”

One thing LaGrange’s players have had to adjust to this week are the rising temperatures.

A few weeks ago, LaGrange’s games were being played in sweater and jacket weather, and this week it has felt more like summer.

LaGrange coach Andy Fritchley said the preseason conditioning program the players went through helps, although nothing can absolutely prepare a player for running up and down a field for 90 minutes when it’s 80 degrees.

“We worked very hard on that in the offseason,” Fritchley said. “But you can’t really work on heat acclimation until it happens.”

LaGrange will take two weeks off before visiting Pike County on April 5, and it will return to region play on April 8 with a game at Shaw.

Doerr said she and the other seniors want to make sure the high-school soccer journey ends in the state playoffs.

LaGrange needs to finish fourth or higher in the region to make it to state.

“Someone told me how many we have left, and all of the seniors were like, we just want to put it off and slow it down,” Doerr said. “One of our things for the seniors is, we want to make it to the playoffs, so this is another step closer.”

OF NOTE: For more photos from Wednesday’s game, check out facebook.com/LDNsports