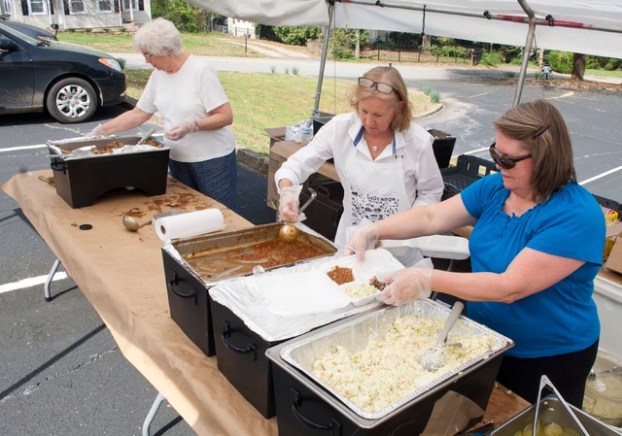 Amy Hurston, a member of the LaGrange Woman’s Club, hands a supporter a barbecue plate during a fundraiser Wednesday for the historic Bellevue home on Ben Hill Street.

http://lagrangenews.com/wp-content/uploads/sites/37/2016/03/web1_BellevueBBQ03WEB.jpgAmy Hurston, a member of the LaGrange Woman’s Club, hands a supporter a barbecue plate during a fundraiser Wednesday for the historic Bellevue home on Ben Hill Street.

From left, Judy Bledsoe, Kathren Fogg and Nancy Watson, members of the LaGrange Woman’s Club, prepare barbecue plates during a fundraiser for the historic Bellevue home Wednesday near McClendon Circle.

LaGRANGE — A local civic organization on Wednesday raised thousands of dollars to support an area landmark.

The LaGrange Woman’s Club’s annual barbecue sale raised more than $3,000 that will be donated for the maintenance and upkeep of Bellevue, the historic home of late U.S. Sen. Benjamin Harvey Hill, according to Kathren Fogg, the club’s publicity chair.

“This is our 10th year doing this,” she said. “We have a wonderful partnership with Hog Heaven (barbecue) and they’ve been with us for all 10 years.”

By noon Wednesday, the club sold about 300 plates of barbecue, Fogg said, with the goal of selling a total of 340.

The club meets monthly at Bellevue and is a service organization to which Bellevue was gifted in 1942 after purchase by the Fuller E. Callaway Foundation.

The home, a Greek Revival built about 1854, was added to the National Park Service’s National Register of Historic Places in 1972. The grounds of the home originally covered 1,200 acres and were enclosed by a stone wall and massive gates, replicas of gates at the White House, and said to have cost $12,000, according to National Park Service records.

The gates once stood at the intersection of Ben Hill and Broad streets. Today, parts of the gates sit on the campus of LaGrange College near the chapel.

The LaGrange Woman’s Club’s next outreach event is scheduled for May 12, and will be a fashion show and luncheon at Bellevue, Fogg said.