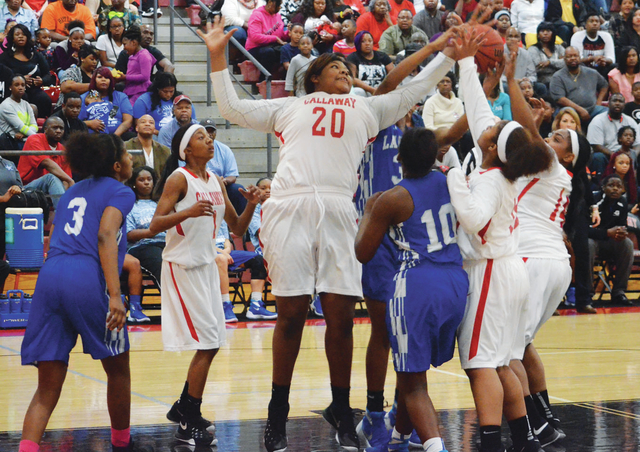 LaGrange’s Harrison Hunnicutt passes the ball while Yeison Diaz looks on during Thursday’s game. Diaz scored the game-winning goal with 7:06 left in the second half. Kevin Eckleberry | Daily News

http://lagrangenews.com/wp-content/uploads/sites/37/2016/03/web1_LHS5-2.jpgLaGrange’s Harrison Hunnicutt passes the ball while Yeison Diaz looks on during Thursday’s game. Diaz scored the game-winning goal with 7:06 left in the second half. Kevin Eckleberry | Daily News

LAGRANGE – Their season was on the line.

Had the LaGrange Grangers lost Wednesday’s home soccer match to Harris County, they could have still made it to the state playoffs, but the odds would have been long.

The players came into the showdown against Harris County with the thought they had to win, so they approached the game with playoff-type intensity.

It wasn’t easy, but the Grangers found a way.

Harris County scored with a little more than 14 minutes remaining to tie it, but LaGrange answered with a goal from Yeison Diaz seven minutes later to reclaim the lead.

Harris County was unable to find the tying goal, and it was LaGrange escaping with a season-saving 2-1 victory.

“It was either win or go home,” said senior Matthew Thomas, who had a goal and an assist. “And that was our mentality coming into this game.”

The Grangers improved to 1-2 in Region 1-AAAAA, and they have three region games remaining as they look to bolster their position.

LaGrange needs to finish fourth or higher in the seven-team region to earn a playoff spot.

“Our guys knew that the season was on the line for us,” LaGrange head coach Keita Placide said. “We needed this game.”

It took the Grangers less than two minutes to put the first goal on the scoreboard.

After the ball went out of bounds off of a Harris County player, Thomas prepared to throw the ball in for LaGrange.

Thomas was looking to place the ball near the goal with the hope that one of his teammates could get a shot away.

Instead, Thomas’ throw went directly toward the goal keeper, who leaped and grazed the ball, but he was unable to keep it from finding the back of the net.

“It has to touch someone, and the keeper barely tipped it,” Thomas said of his throw-in. “I was trying to get it to the back post, and it happened to go in.”

Neither team scored for the rest of the half, and LaGrange had a 1-0 lead at the break.

That’s the way it remained until a Harris County player collected a rebound and scored with 14:07 to play in the game, and it was tied 1-1.

The Grangers responded by putting together some of their best offensive runs of the game.

The Grangers had a great look at the goal with 10:52 to play, but a shot attempt went awry.

The Grangers kept the pressure on, and with a little more than seven minutes remaining, they were awarded a throw-in.

Once again it was Thomas putting the ball in play, and when the ball landed, Diaz was there waiting on it, and he scored with 7:06 to play to put LaGrange on top 2-1.

“The ball bounced, and I just ripped it in,” Diaz said. “That was it.”

LaGrange’s defense stood firm from there, and when the clock struck zero, the players were able to celebrate a much-needed win.

“We’re still nowhere close to be playing great,” Placide said. “It’s a lot of work to be done, but I’m proud of them. We give up (the tying goal), but we stayed the course and got the goal.”

LaGrange will take two weeks off before visiting Pike County on April 5, and it will resume region play on April 8 at Shaw.

LaGrange’s final two region games will be against Carver and Hardaway.

There’s a long way to go, but thanks to Wednesday’s win, the Grangers are very much a contender to make it to state.

“It’s going to turn our season around I believe,” Diaz said.