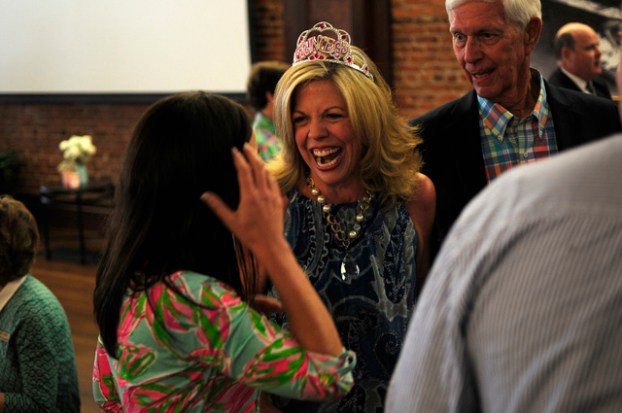 Troup County Teacher of the Year: Relationships are ‘absolutely everything’

Newly named Troup County School System Teacher of the Year Jill Gay, center, and her supporters ham it up as Hollis Hand Elementary School Principal Jack Morman takes a photo during the Teacher of the Year ceremony Wednesday at Del’Avant, where Gay was announced as the winner.

http://lagrangenews.com/wp-content/uploads/sites/37/2016/03/web1_web0317TOTY02.jpgNewly named Troup County School System Teacher of the Year Jill Gay, center, and her supporters ham it up as Hollis Hand Elementary School Principal Jack Morman takes a photo during the Teacher of the Year ceremony Wednesday at Del’Avant, where Gay was announced as the winner.

An excited Jill Gay, a Hollis Hand Elementary School teacher, talks to supporters at Del’Avant on Wednesday after she was named the Troup County School System Teacher of the Year. A group of supporters ran out to give her a tiara after her name was announced.

http://lagrangenews.com/wp-content/uploads/sites/37/2016/03/web1_web0317TOTY01.jpgAn excited Jill Gay, a Hollis Hand Elementary School teacher, talks to supporters at Del’Avant on Wednesday after she was named the Troup County School System Teacher of the Year. A group of supporters ran out to give her a tiara after her name was announced.

The Hollis Hand Elementary School instructor on Wednesday was named the Troup County School System’s Teacher of the Year during a ceremony hosted by the school system at Del’Avant.

“To say I’m on top of the world right now is the understatement of the century,” she said giddily after the ceremony. “… I’m absolutely exploding with excitement, and I’m not sure if I will ever fall asleep again.”

For Gay, the award was validation of a 10-year aspiration, which started when she began teaching in Troup County.

“I will never forget that I was in the central office and saw the pictures of the system-wide teachers of the year. … And in my mind, back then, I knew I wanted to do that some day,” she said. “And it’s always been in the back of my mind as something I wanted to achieve. So being here, in this moment, 10 years later, after seeing those, it’s — I’m just shocked.”

Gay has spent those last 10 years at Hollis Hand Elementary School. Prior to coming to Troup County, she taught in Newnan for three years and Alabama for 10 years.

The veteran teacher started at Hollis Hand the same time as Principal Jack Mormon, who on Wednesday was praising Gay for the win and her knack of cultivating strong relationships with and among her students to promote a love of learning.

“That is where she excels at such a high rank,” Morman said. “She brings kids from diverse backgrounds and makes them all be cheerleaders for each other.”

He referred to a text message he received from Gay the night before, where she mentioned that her favorite part of the process will be the effect it has had on one of her students.

“He (the student) has been counting down the days until tomorrow!” states the text from Gay to Morman, which Morman shared with the Daily News. “Every day he comes up to me and says, ‘I’m just ready to find out if we beat all the colleges and high schools to win the best class award!’ And then he smiles really big and tells me they are the best class because they have the best teacher! … This has meant the world to him. Of course I would like to win, but bringing so much happiness to him really is enough for me.”

Morman added that the student was disappointed when he found out that the award wouldn’t be announced until after school and he wouldn’t know if she won. Gay was going to call him that afternoon to give him the news.

“To me (relationships are) absolutely everything,” Gay said. “And especially right now, when all testing is at the forefront of every educational conversation; it’s all about testing. My thought is, if it’s not meaningful to the kids and if they don’t feel like their teacher cares about them, they’re not going to engage, and I just — the connection I have with my students is so beyond any test score or anything, it’s what they will remember, and it causes them to remember what I have to say, and I just feel like if I can get them to love to learn in second grade, then there’s no telling what they can do.”

She said the students forming relationships among each other is just as important as learning. If students aren’t comfortable with their peers, she said, they’re unlikely to learn, but forming camaraderie helps encourage students to reach their potential.

Gay was also quick to defer all the attention from herself and praise her co-workers and school administrators for creating a conducive and fun learning environment.

“I just have such an incredible support system between my fellow teachers, administrators, my family, my students’ parents (and) my students,” she said. “I feel like I have my own little cheerleading team daily. Nobody gets something like this without a lot of help and support. And I represent the teachers at Hollis Hand. I don’t do anything beyond what they do. This is Hollis Hand’s award.”

Morman echoed her praise, but moved the spotlight back toward Gay.

“We have an awesome staff at Hollis Hand, but to have one of our teachers recognized as the system teacher of the year is just — we’re excited for her and our whole staff because we support each other a whole lot,” he said. “… She has been so humble and worked so hard throughout this process. She was really wanting to see how she could make things better for her kids. That is the whole thing.”