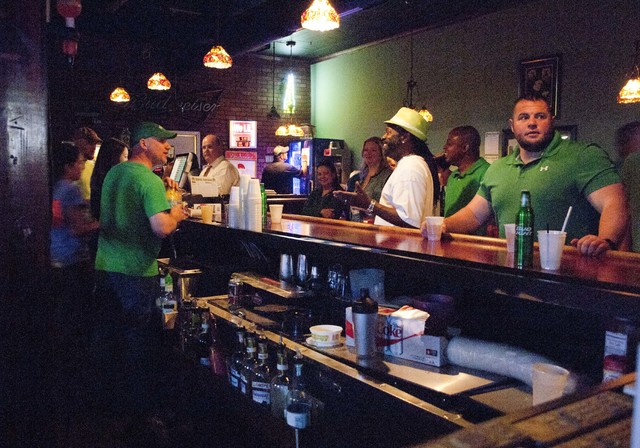 Beth Knight, left, hugs Patsy Hiers on Thursday as they discuss the Friday closure on the Idle Hour Pub on Bull Street. The pub had been in business since 1980.

http://lagrangenews.com/wp-content/uploads/sites/37/2016/03/web1_IdleHour03WEB.jpgBeth Knight, left, hugs Patsy Hiers on Thursday as they discuss the Friday closure on the Idle Hour Pub on Bull Street. The pub had been in business since 1980.

A bartender pours a drink Thursday at the Idle Hour Pub on Bull Street.

People visit the Idle Hour Pub on Bull Street during the St. Patrick’s Day block party on Thursday. The pub closed Friday after being in business since 1980.

http://lagrangenews.com/wp-content/uploads/sites/37/2016/03/web1_IdleHour01WEB.jpgPeople visit the Idle Hour Pub on Bull Street during the St. Patrick’s Day block party on Thursday. The pub closed Friday after being in business since 1980.

LaGRANGE — “It’s hard to sit down in 10 minutes and tell you the story of this place, but I’ve got some stories,” Dan Tracy said as he lit a cigarette and sat in his empty bar about noon on St. Patrick’s Day.

For 29 years, Tracy — a Tampa, Florida, native — has owned the Idle Hour Pub on Bull Street. Friday, he started a new chapter in his life as he locked the doors for the last time and closed a local institution that’s spanned nearly four decades.

“Anybody who’s ever run a restaurant knows it’s the hardest business in the country,” Tracy said. “Anybody who’s never done it doesn’t have a clue. But we were pretty damn good for 36 years. I don’t know, man, it’s kind of a sad thing.”

“Before he officially opened, his brother and I would come up here and help build the bar and so forth,” said Tracy, who then lived in Florida. “We were just getting out of town for a weekend. In ‘87, he (Kirk) cut for the hut and asked if I wanted to buy it from him, so I did. I’ve been here ever since.”

Over the years, Tracy has seen changes not only to his pub, but also LaGrange as a whole. He remembers a time when the pub was “the lone star,” as he called it, and was one of the few businesses downtown to be open after 5 p.m.

“There was a beat cop that used to walk this beat, and he walked it every night,” Tracy said. “He had a key to the front door and he would come in to get out of the cold. That’s how it was. We were family. The truth is our customers became family. If I had 100 people in here, I knew 99 of them by their first name.”

During its heyday, the pub was “bursting at the seams,” Tracy said. So much so that he expanded the bar about 15 years ago and remodeled, tearing out a wall that once separated two sides and overhauling the entire personality of the space.

“LaGrange was growing,” he said. “We had the shakers and the movers coming here and we needed more space.”

Things started to change, or “crack” as Tracy called it, with the closure of multiple textile mills in LaGrange several years ago.

“People don’t realize it today, but when (the mills) downsized, that affected commerce in this town,” he said.

The pub was once a gathering space for both blue and white collar workers at the plants, Tracy said, and a significant portion of his business was tied to the jobs provided by textile manufacturers.

“(The mills) would call us up and say they had people coming and they needed appetizers for 40 people on a Friday night, and there you go. What else do you need? We attracted the young executives. We had such a continuity of people, a diverse crowd. The working guys and the business guys, and they melted. It worked. It just worked,” Tracy said.

Part of the attraction of the Idle Hour Pub for many was its family-like environment, said Kai Fincher, who worked as a bartender and manager at the pub from 2000 to 2010.

“With the business closing, Dan just wants people to come out,” Fincher said Thursday as the pub was packed with St. Patrick’s Day revellers. “He doesn’t care if they spend any money or not. This place was more than a pub or a bar, it was a place where we all came to see each other and talk to each other. It was our home away from home.”

Fincher recalled fondly not just the camaraderie he found at the pub, but also the charity work the bar did. Each year, the pub sponsored a golf tournament to benefit different charities, he said.

“The annual pub tournament always donated a percentage of the proceeds to a voted-on charity, somebody that was in need that year,” he said. “It always changed year to year.”

One degree from Kevin Bacon

The close-knit environment of the Idle Hour kept its regulars coming back, but they weren’t the only ones greeted by the pub’s creaky front door.

Hollywood actors Robert Duvall, Billy Bob Thornton and Kevin Bacon showed up at the pub in 2011 while they were filming a movie in the area. They took photos with patrons and were the talk of LaGrange for several days.

Tracy said the star sighting was a memorable moment during his time owning the pub, “but more important than those guys were our regulars, who absolutely loved this bar. This is where they’d come and unwind after work. We watched the Masters (Golf) Tournament together, the Super Bowl, the World Series, all of it.”

Even though the pub won’t be around to see it, Tracy said he thinks downtown LaGrange’s resurgence will continue.

“The downtown is finally starting to open up and do some things like St. Patty’s Day and the Battle of the Bands where we can generate some revenue,” he said. “All of our restaurants downtown are family owned. If you’re in this business, you better love it or you don’t belong here.”

For better or worse, Tracy said bluntly he thinks the Idle Hour Pub may have run its course.

“I’ll tell you what happened to us,” he said. “We stayed here too long. Nobody owns a bar for 30 years.

“I’ve got a customer that’s been coming here for 30 years,” he continued. “Who does that? What happened is — and I’ve said this for a long time — people got older, they got married, they had kids, they got transferred, some got divorced, some died.

“That’s true with any business in town, but this was different. I almost never did any advertising. People found out about us through word of mouth. One of our customers once told me if you come into the pub, and you don’t know anybody, if you don’t have a friend when you leave, it’s your own fault. That’s absolutely the truth.”