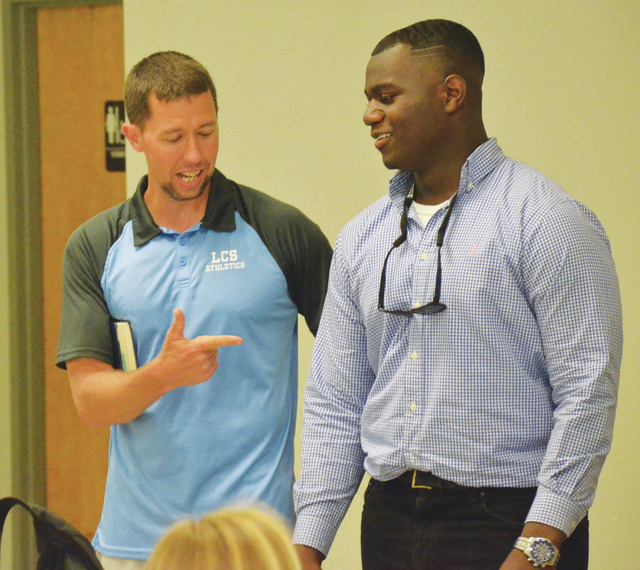 Lafayette Christian School’s Josh Shepherd stands with his teammates on the football team that won a state championship last fall. Shepherd has signed a letter of intent to play football at the University of Tennessee at Chattanooga. Kevin Eckleberry | Daily News

http://lagrangenews.com/wp-content/uploads/sites/37/2016/03/web1_shepherd4.jpgLafayette Christian School’s Josh Shepherd stands with his teammates on the football team that won a state championship last fall. Shepherd has signed a letter of intent to play football at the University of Tennessee at Chattanooga. Kevin Eckleberry | Daily News

During a ceremony in the school’s cafeteria last week, with his classmates, teammates, friends, family members and coaches there to share the moment with him, Shepherd announced that he is going to the University of Tennessee at Chattanooga to play college football.

Shepherd, a linebacker who helped lead Lafayette Christian to a state championship last fall, has become the first athlete in the school’s history to sign a football scholarship.

“I’m so excited about going up to UTC and show that, even coming from eight-man football, you can play (in college),” Shepherd said. “It’s through God, first. He really made everything possible.”

As for the signing ceremony, Shepherd said “everything was phenomenal. It’s a great honor to be recognized at a school where I spent my career.”

Nate Shaw, Lafayette Christian’s head football coach, said that when Shepherd joined the program as an eighth-grader, that playing in college was already something he was contemplating.

As Shepherd grew as a player, the program started to spread its wings as well.

The Cougars reached the semifinals of the Georgia Independent Christian Athletic Association eight-man state playoffs in 2013 and 2014, and the team took the next step last fall and won a championship.

Shepherd, who overwhelmed opposing offenses from his linebacker position, was a key component of that championship team.

“If you really watch the film, there’s one reason these rings are on our fingers, and that’s because of number 66,” Shaw said. “We’re going to miss him. I’m so proud of his accomplishments.”

Shepherd is proud of how far the program has come.

“When I first came here, I saw kids that really didn’t even know how to put on football pads,” Shepherd said. “Now, over my five years here, everything has changed. We have made winning a tradition here. We became a lot more organized, and we take football a lot more seriously, and we’ve taken it to another level.”

He has all of the physical measurables college coaches look for, and he has obviously produced in a big way on the field.

After the 2015 season, Shepherd got an opportunity to play in an all-star football game in Florida for elite players from across the country, and that helped immensely with the recruiting effort as well.

Shepherd took his time with the recruiting process, and he’s glad he took his time and made sure he was doing what was best for him.

Shaw, who was the defensive coordinator at Lafayette Christian before taking over as the head coach last season, said Shepherd has made a lasting mark on the program, and that for the foreseeable future, no Cougar will wear his jersey number.

“Next year, no one will be wearing 66, in honor of his career,” Shaw said. “We’re going to put that on the shelve for a while. I’m not saying we’re retiring it, but it’s going to take a special person to come in here and wear 66.”

Shaw said because of his ability as a player, and because of the kind of person he is, that Shepherd is an ideal role model for future Cougars.

“Where we see the impact is the middle-school program,” Shaw said. “What a great example. You talk about peer-mentoring, that’s it right there. You can’t ask for anything more than that.”

Shepherd is glad he was able to help bring the first football state title to Lafayette Christian before he exited the state.

He recalls a conversation he had with Shaw a few years back when it predicted that the Cougars will eventually win the big trophy, and he was right.