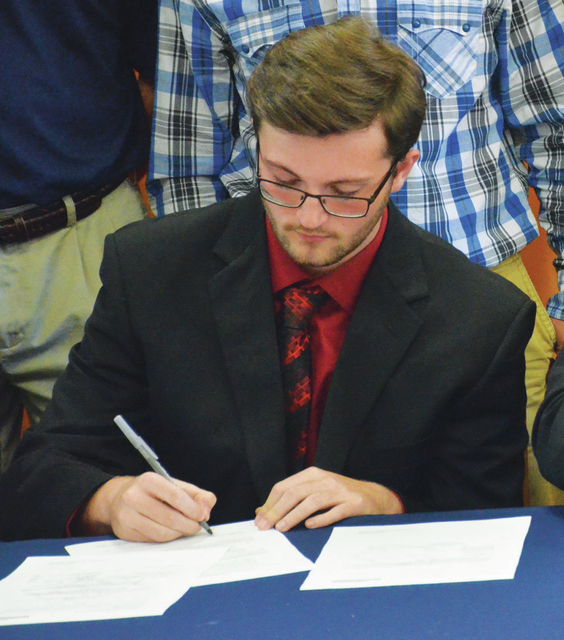 Troup’s Matt Moore and Matthew Hale are both going to be playing soccer at Young Harris. Kevin Eckleberry | Daily News

http://lagrangenews.com/wp-content/uploads/sites/37/2016/03/web1_signing7.jpgTroup’s Matt Moore and Matthew Hale are both going to be playing soccer at Young Harris. Kevin Eckleberry | Daily News

LAGRANGE – For Troup High’s Matt Moore, there were no shortcuts.

When he joined the Troup soccer team as a freshman, the thought of playing on the collegiate level some day wasn’t on his radar.

Something that may have seem far-fetched four years ago is about to become a reality, though.

On Monday, during a signing ceremony in the Troup High media center, Moore announced that he’ll be going to Young Harris College to play soccer.

He’ll be joined at Young Harris by Troup teammate Matthew Hale, who signed his letter of intent earlier this month.

Moore has developed into a top-notch goal keeper, and he said it has been all about working hard, and putting the time in year-round.

“Honestly coming in as a freshman in high school, I would have never seen myself in this position,” Moore said. “I never really played sports before seriously. I worked hard for four years with my teammates, with my friends. We worked hard throughout the summer when everyone wasn’t practicing. When everyone else was sitting around eating Cheetos and drinking Kool-Aid, we were out there in the hot sun, taking shots, getting better every single day.”

When Moore decided he wanted to play college soccer, he was doggedly determined to make it happen.

He played soccer on a travel team that helped increase his exposure, and he went to various soccer camps on college campuses.

“I went to Mercer. And they said you’re a good player, but you don’t fit our scheme,” Moore said. “And then Point (University) was looking at me and Matthew originally. We said we’re going to go to Point. We’re going to stay at home, and it’s going to be great. And then there was a Young Harris camp. And we thought, we should try out.”

The camp was held a week later than originally scheduled because of severe weather, and Moore believes that worked in his favor because it was a much smaller pool of players than it would have been otherwise.

“Some people that were going to come to the first one couldn’t come because it was a week later,” Moore said. “So there were maybe 40 people less than there would have been. So me and Matthew had a chance to display what we had as players together, and the coach had more time to look at us.”

There was one other goal keeper in the camp, and Moore made sure to let the coaches know he was the better option.

“I was going to work hard the whole training session just to let these coaches know that I’m better,” Moore said.

Moore’s focus paid off when he and Hale were both offered scholarships to play soccer at Young Harris, and they both accepted.

On Monday, Moore was joined by the people who have helped him reach this point, and he said it was “an amazing feeling.”

“And just to be able to thank everyone that’s been there for me every step of the way, pushing me to be better, to be a better soccer player, it’s a great feeling,” he added.

Moore said he appreciates the help provided by his teammates and friends, as well as his coaches who he said were always there for him.

“They were there when training wasn’t going right, or it was too hard that day, and I was just fed up with soccer,” Moore said. “They turned my head around, and got me back on the track I needed to be.”

Moore also expressed his appreciation for his mother, who he said “has been with me every step of the way, always supporting me, and just being there for me. Without my mom, I don’t know where I’d be.”

Moore still has some work to do as a Troup soccer player.

The Tigers are 0-1 in Region 5-AAAA, and they have a key region game at Sandy Creek on Thursday.

The Tigers rely heavily on Moore to be a brick wall in goal, and he’s fine with that pressure.