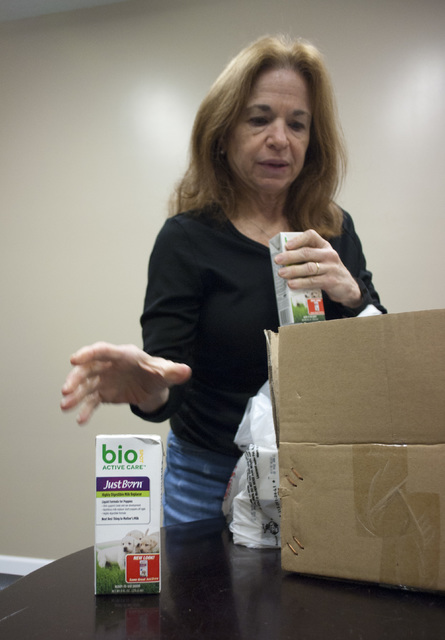 A 2-week-old puppy curls up with kittens Monday after being adopted by a mother cat at the LaGrange Animal Shelter.

http://lagrangenews.com/wp-content/uploads/sites/37/2016/03/web1_DogsAndCats01WEB.jpgA 2-week-old puppy curls up with kittens Monday after being adopted by a mother cat at the LaGrange Animal Shelter.

A mother cat nurses her kittens, along with a puppy she’s fostering, on Monday at the LaGrange Animal Shelter.

http://lagrangenews.com/wp-content/uploads/sites/37/2016/03/web1_DogsAndCats02WEB.jpgA mother cat nurses her kittens, along with a puppy she’s fostering, on Monday at the LaGrange Animal Shelter.

LaGRANGE — Who says cats and dogs can’t get along?

After a mother dog was hit and killed by a car on Thornton Street last week, two puppies found themselves orphaned — until an unlikely adoption blossomed.

The puppies, both about two weeks old, were picked up by LaGrange Animal Control and taken to the city shelter on Orchard Hill Road, where two nursing cats took them in as their own and have been rearing them, said Chris Bussey, the shelter’s supervisor.

“It’s not a typical call we see every day,” Bussey said. “It’s pretty unusual for two surrogate cat mothers to take two puppies on like one of their own.”

Curled up with their feline brothers and sisters Monday, one of the puppies slept, nuzzled together with kittens, as the other puppy nursed, drinking milk from a mother cat, who’d just recently given birth to her own kittens.

“We’re not sure of the (dogs’) breed,” said Casey Olson, the animal control officer who picked up the puppies from Thornton Street. “This is something I’ve heard of before, but never seen.”

Linda Couto, an administrative assistance for the LaGrange-Troup County Humane Society, said if the cat mothers hadn’t been nursing, the puppies would likely have had to be fed by syringe using a special milk replacement formula.

“But we got lucky,” she said. “Since the two cats just had litters, they’re able to nurse. It’s like a motherly instinct.”

The local Humane Society is gearing up for incidents like this in the future, Couto said. Soon, the society is planning to launch a foster program where local people can adopt animals with special needs — like the puppies — or other animals if the shelter is at capacity.

The foster program isn’t a permanent adoption, but would be a place for animals to stay until they were adopted in the community, Couto said.

A special pet adoption event is also scheduled for Saturday at the Sweetland Amphitheatre on Smith Street from 10 a.m. to 2 p.m. in conjunction with the Paw Day event.