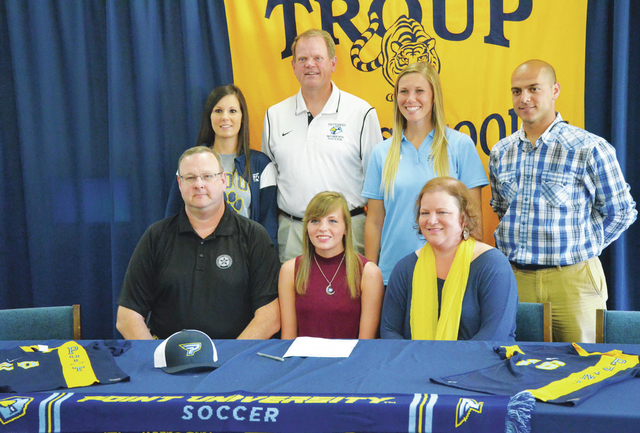 LAGRANGE – Troup High’s Serena Reeves is getting an opportunity to play college soccer, and she won’t have to go far to do it.

Reeves, a senior standout for the Lady Tigers, is going to play at Point University in West Point, and she made that announcement during a signing ceremony in the Troup High media center on Monday.

“I’m very excited,” Reeves said. “I never thought this would happen to me.”

Not only is it happening, but Reeves will be able to stay at home, meaning her friends and family members can come watch her play anytime.

“That’ll be awesome,” she said. “I can’t wait for my parents to come watch me play.”

Monday was a special day for Reeves, who was grateful to share the moment with so many people who have helped her reach this point, including her parents.

“It just means the world,” she said. “It means everything to me. They watched me start from the bottom when I first started playing pee-wee soccer at the rec fields. And now that I’m here, it’s just crazy.”

Morgan said that whatever Reeves is asked to do, she goes about it with 100-percent effort.

“You can pretty much put her anywhere, and she’ll go and she’ll play her heart out, and leave everything on the field,” Morgan said.

At the moment, Reeves is hoping to help the Lady Tigers finish their season strong.

It has been a struggle this spring, but Troup did beat Spencer 1-0 on Friday for its first win of the season.

It was a scoreless game when Reeves delivered the game-winning goal with about 15 minutes remaining, and the Lady Tigers held on from there.

Troup will try to get its first Region 5-AAAA win of the season when it visits Sandy Creek on Thursday.

Reeves is glad the team will be going into that game having experienced a taste of success.

“It boosted our confidence up,” Reeves said of the Spencer win. “We needed it.”