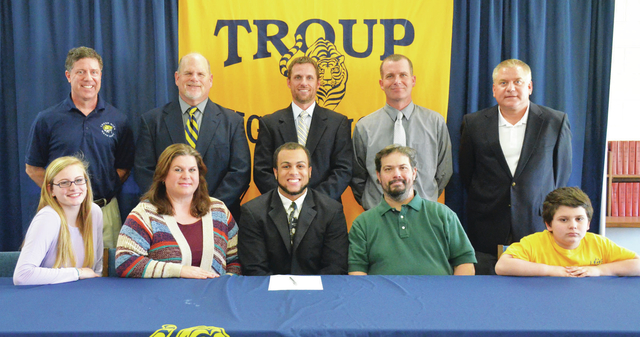 LAGRANGE – What Eli Patrick can do on a football field is easy to see.

Patrick was an outstanding linebacker for the Troup Tigers, and if a defensive play was being made on a Friday night, chances are he was in the middle of it.

So Patrick’s head coach at Troup, Tanner Glisson, has no doubt he will continue to succeed as a player on the college level.

Patrick is just as accomplished in his life away from the gridiron, though, and Glisson is eager to see what his former player will accomplish without the pads on.

“I’m interested to see what he’s going to do in college on the field,” Glisson said. “But I’m even more interested to see if he’s the next CEO somewhere. He has that kind of potential. He’s very, very smart. We’re going to miss his leadership.”

On Monday afternoon during a ceremony in the Troup High media center, Patrick announced that he’ll be playing college football for the NCAA Division III Birmingham-Southern Panthers.

Patrick was joined on the stage by a pair of soccer players at Troup who also made their college announcements.

Serena Reeves is heading to Point University, and Matt Moore is going to Young Harris College.

Patrick was there in February watching his teammates make their college announcements, and on Monday it was his turn, and it was a special moment.

“There are hardly any words to describe it,” Patrick said. “I don’t even know how to put it into words. It’s breath-taking really. It leaves you in awe. I have an opportunity to go and play football, and continue my career.”

When Glisson was introducing Patrick, he spoke of a man who he calls “the best of the best.”

Patrick has a 3.9 grade point average, he had an excellent ACT score, and he was Mr. Troup High School.

“I think he represents what a student athlete is supposed to look like,” Glisson added. “Above all, he is called a good son, a good friend, and a good teammate by all those that know him.”

Patrick’s final season at Troup was a tough one from a team standpoint.

The Tigers went 1-9, and they didn’t win their first game until the final week of the season.

Patrick loved being a Troup Tiger whether the team was winning or losing, though.

“Spending time with my teammates, and all my friends that I’ve made, growing closer to the coaches and the teachers here, I wouldn’t trade it for anything,” Patrick said.

Patrick said he’s grateful for all of the people who helped him reach this point, including his teammates and his coaches.

“I just want to take this time first to thank God, because without him, none of this would have been possible. I wouldn’t have this opportunity,” Patrick said. “I just want to thank all of my teammates, for pushing me through four, five years of playing ball. There were times where I wanted to quit, but y’all pushed me to keep going. I want to thank my family for all the money, and time y’all spent on me. I’m just thankful for all my friends I’ve got out here, just for coming to the games and supporting not only me, but the whole team.”

Patrick also expressed his appreciation for one his teachers at Troup, Pete Anderson, who helped him achieve great success as a student.

“I just wanted to say thank you to coach Anderson for just in the classroom pushing me to be the best I can be, and keeping my grades right, so I could have this opportunity,” Patrick said.

the 2015 season was Glisson’s first as head coach at Troup, and he’s glad that he got the opportunity to coach Patrick for one season.

“We butted heads from time to time with the old regime and trying to make a new way at Troup,” Glisson said. “We came to respect each other. I came to respect his opinion.”

“He actually wasn’t healthy all year long,” Glisson said. “He was recovering from a knee injury, and had to battle through that. And you couldn’t keep him out. That knee would go out on him, and he’d come running right back in. He’s just a tough kid. And hopefully now he’s had some time to heal up and get going.”