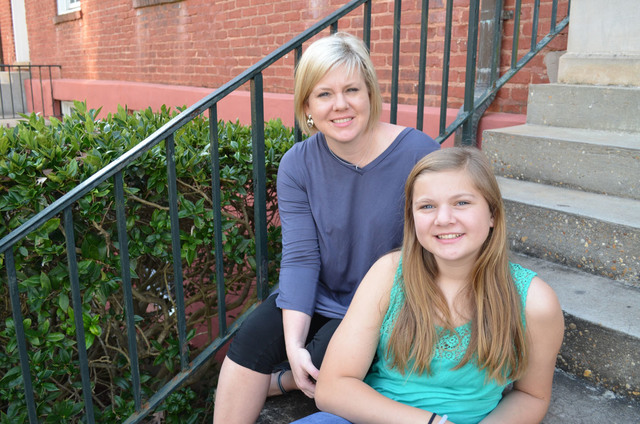 Hayleigh Sebaugh sits with her mom, Leslie Sebaugh. Hayleigh experienced Camp Dogwood last summer after the death of her great-grandfather earlier in the year. Her mom served as a volunteer.

http://lagrangenews.com/wp-content/uploads/sites/37/2016/03/web1_web0323Sebaugh.jpgHayleigh Sebaugh sits with her mom, Leslie Sebaugh. Hayleigh experienced Camp Dogwood last summer after the death of her great-grandfather earlier in the year. Her mom served as a volunteer.

LaGRANGE — When Hayleigh Sebaugh, 12, made a memory pillow last summer at West Georgia Hospice’s Camp Dogwood, it didn’t take long for her to think of illustrations to commemorate her dear late great-grandfather, Ralph Hull. Camp Dogwood is a grief camp for children who have lost a close friend or family member in the past year.

On the pillow, she first drew a cross, an image that came to her mind because of “PawPaw Hull’s” relationship with Christ and love for his church, Clearview Chapel.

Then, she drew a sunshine, remembering how his bright smile and personality could light up a room. After that, she drew his garden and a pawprint for his dog, DJ.

“PawPaw Hull was most comfortable in his overalls on his golf cart with his dog DJ by his side during his daily routine of checking his garden,” said Hayleigh’s mom, Leslie Sebaugh, of her grandfather, who passed away in January 2015 at age 86.

Hayleigh also drew a heart on her pillow to show the love PawPaw Hull shared with his family, including his wife, Betty Hull; two children; four granddaughters; and 11 great-grandchildren.

“He hung the moon that the Lord created; he was just a ray of sunshine,” Leslie Sebaugh said. “He made sure we knew he loved us and gave us the best hugs.”

Being from LaGrange, Leslie Sebaugh had heard of Camp Dogwood, a weekend overnight camp held in June at Camp Pioneer on the Georgia Sheriffs Home Pineland Campus.

West Georgia Hospice provides the camp at no charge to families of the children, who must be in kindergarten through eighth grade, lost a close friend or family member within the past year, and live in Troup, Coweta, Heard, Meriwether and Harris counties. This year’s camp will be held June 10 to 12.

Not only did Hayleigh experience Camp Dogwood, but her mother did too.

“When I signed Hayleigh up, I heard they still had a need for adult volunteers to help the weekend run smoothly,” said Leslie Sebaugh, who plans to volunteer again this year. “Every year they need about 75 to 85 volunteers, from small-group helpers, cabin volunteers, activities volunteers, mealtime volunteers and so many other things. It’s amazing how many people give of their time to provide this for the children.”

Although volunteers don’t have to spend the night, she volunteered to stay in a girls’ cabin and also to escort the children from activity to activity. Both mother and daughter said the atmosphere was completely different from what they expected.

“Before I got there, I kind of thought it would be boring, actually,” Hayleigh said. “But we didn’t just sit around and talk about our feelings like you might think. There’s a huge feeling around you of support while you do all kinds of fun activities.”

Besides small-group sessions such as “Feelings,” “What is Death?” and “Memories,” the kids also participate in fun activities such as fishing, water-sliding, swimming, horseback-riding, making arts and crafts, and playing games. The small groups are led by certified counselors, most of whom are local school counselors who have volunteered their time for the weekend.

Now in its 20th year, Camp Dogwood is designed to give the children guidance as they reflect on their loss and learn they are not alone as they meet other children who understand the depths of what they’re feeling, said Tammy Forbus, West Georgia Hospice Volunteer Coordinator.

“Some of our children have lost their father or mother, and some have even lost both in one year,” Forbus said. “Others have lost grandparents who served in the role as parents for them. Many children who come have lost brothers or sisters, a special cousin, an aunt or uncle, or a really good friend. These are life-changing and devastating losses for them.

“Camp also is about having fun,” Forbus said. “We have so many gracious volunteers who provide activities that allow the kids to be kids and maybe even experience something new. Many volunteers, for instance, are wonderful as they bond with some of our younger children as they patiently teach them to fish and celebrate with them when they catch their first one.”

Parents are invited back for group presentations on the last day of camp as well as a touching memorial service to close out the weekend: The children write a note to their loved one and tie it to a balloon, which is released into the air along with butterflies to remember those they’ve lost.

“The children release their balloons one by one as their loved one’s name is called, and they also release their butterflies into the air,” Forbus said. “It’s a wonderful, touching way to end a great weekend.”