It’s a walk-off win for Grangers 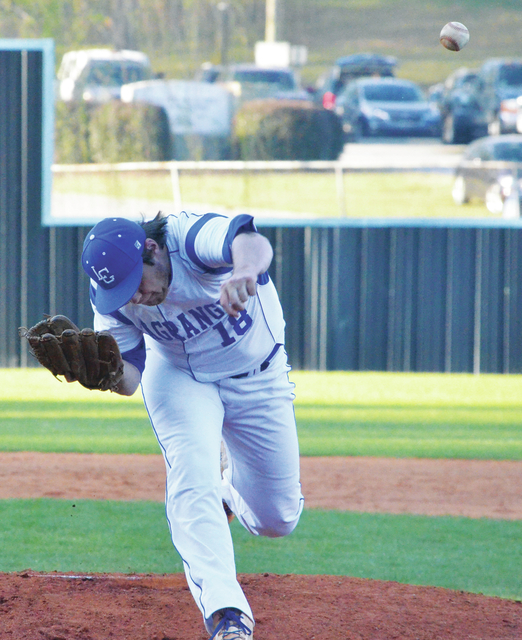 Willis Kemp had a base hit in the bottom of the eighth inning to lift LaGrange to a 3-2 victory over Hardaway. Kevin Eckleberry | Daily News

http://lagrangenews.com/wp-content/uploads/sites/37/2016/03/web1_LHS2-2.jpgWillis Kemp had a base hit in the bottom of the eighth inning to lift LaGrange to a 3-2 victory over Hardaway. Kevin Eckleberry | Daily News

David Sweat hits a sacrifice fly in the bottom of the seventh inning to score Cole Freeman with the tying run. Kevin Eckleberry | Daily News

http://lagrangenews.com/wp-content/uploads/sites/37/2016/03/web1_LHS5-3.jpgDavid Sweat hits a sacrifice fly in the bottom of the seventh inning to score Cole Freeman with the tying run. Kevin Eckleberry | Daily News

LaGrange’s Larkin Easterwood gets a bunt down during the eighth inning of Tuesday’s win. Kevin Eckleberry | Daily News

http://lagrangenews.com/wp-content/uploads/sites/37/2016/03/web1_LHS4-2.jpgLaGrange’s Larkin Easterwood gets a bunt down during the eighth inning of Tuesday’s win. Kevin Eckleberry | Daily News

LaGrange’s Jake Farrar did a nice job on the mound, and he had a base hit to start the game-winning rally in the eighth inning. Kevin Eckleberry | Daily News

http://lagrangenews.com/wp-content/uploads/sites/37/2016/03/web1_LHS8-2.jpgLaGrange’s Jake Farrar did a nice job on the mound, and he had a base hit to start the game-winning rally in the eighth inning. Kevin Eckleberry | Daily News

LAGRANGE – He was up to the challenge.

As LaGrange High’s Willis Kemp made his way to the plate during the bottom of the eighth inning of Tuesday’s game against Hardaway, the bags were full, and the winning run was standing on third base.

Kemp’s job was to find a way to bring pinch-runner Amad Ogletree, who was on third base, home with the winning run.

Kemp watched three straight pitches sail out of the strike zone, and he had a 3-0 count, and a walk would have won the game for the Grangers.

“A 3-0 count, I was really looking for a walk,” Kemp said. “And then I swung at one that should have been ball four. I realized I kind of messed up right there.”

He got over that disappointment quickly.

With the count at 3-2, Kemp wasn’t thinking about walking any longer, he was looking to end the game with a hit, and that’s what he did.

Kemp got a pitch he could handle, and he ripped the ball over the shortstop’s head for a base hit, and Ogletree waltzed home with the winning run.

The Grangers had a 3-2 victory, and after enduring a winless week, they enjoyed a much-deserved celebration as Kemp’s teammates surrounded him on the infield.

It was a big win for the Grangers, who dropped all three of their games last week, all against Region 1-AAAAA opponents.

LaGrange improved to 2-4 in the region, and it will finish the week with games against Carver on Thursday and Friday.

LaGrange will be the host team on Thursday, and it will visit Carver on Friday.

“It’s very big,” Kemp said. “We haven’t been playing to our potential. We’ve been struggling a little bit. I think this is going to help us bounce back, pick up the momentum. I think it should kick-start us.”

The Grangers had to rally to win Tuesday’s game.

They were down by a run in the bottom of the seventh inning, and they tied it when Cole Freeman got a hit, advanced to third on an error and scored on David Sweat’s sacrifice fly.

In the bottom of the eighth, Jake Farrar got things started with a base hit, and Larkin Easterwood got down a well-placed sacrifice bunt to put a man in scoring position.

After Champ Willis walked, Matthew Anderson was hit by a pitch, and Kemp made his way to the batter’s box with one out.

On the sixth pitch of the at-bat, Kemp delivered the game-winning hit, and the Grangers had the thrilling, come-from-behind win.

“He didn’t try to do too much, and he put a good swing on the ball,” LaGrange head coach David Smart said of Kemp.

Smart said the story of the final two innings was LaGrange’s ability to execute, to not only get men in scoring position, but to bring them in.

“Early in the game, we had some opportunities where we didn’t execute,” Smart said. “In the first inning, we had a man on third with less than two outs, and we hit a pop-up on the infield. There were a couple of times tonight where we didn’t get the bunt down. And Larkin was one of those guys. And then he turned around and did get the bunt down (in the eighth inning). That’s the game. You’ve got to execute. We talk about it all the time. Thank goodness we did.”

LaGrange’s pitching was superb all game.

The Hawks scored two runs in the top of the first, but they were held scoreless the rest of the way by three LaGrange pitchers.

Matthew Anderson got the start, and he threw the first four innings before Farrar took over at the start of the fifth inning.

With two outs and two men on in the top of the seventh, Ben Anderson came into the game and got a strikeout to end that threat.

Ben Anderson, with the help of a sensational diving catch by second baseman Matthew Anderson, threw a scoreless top of the eighth, and he was the winning pitcher.

“The pitchers threw the ball really well. They kept us in it,” Smart said. “And we had some good defensive plays. Matt makes that diving catch, (Andrew) Askew makes a couple of plays in the outfield, David Sweat runs that one down in the gap in the eighth. And (Coy) Tedescucci picks that ball at first on a slow roller. Like I told the kids, there’s a lot of love to go around.”

After the Hawks scored twice in the top of the first, the Grangers got one of those runs back in the bottom of the inning, despite not getting a hit.

Sweat was hit by a pitch leading off, and he later scored on an error to make it a 2-1 game.

That’s the way it remained until the seventh inning.

Freeman was LaGrange’s leadoff hitter, and he drove the ball to right field and took off, and when the ball was misplayed, he made it all the way to third base.

“I was going to go as hard as I could,” Freeman said. “He fumbled it, and I took advantage of it.”

Freeman knew what his assignment was in that situation.

It was to find a way on base, and he made it happen.

Smart was proud of the way Freeman hung tough with a two-strike count.

“That was big, and it was with two strikes, too,” Smart said. “He gets in there and battles and competes. That was really big.”

Next to the plate was Sweat, and he did his job as well, driving the ball deep to left field, and Freeman scored standing up, and the game was tied.

An inning later, the Grangers once again executed offensively, and they had the much-needed win.

“They competed, and worked hard, and fought,” Smart said. “So hopefully this will give us a little momentum and get us going.”