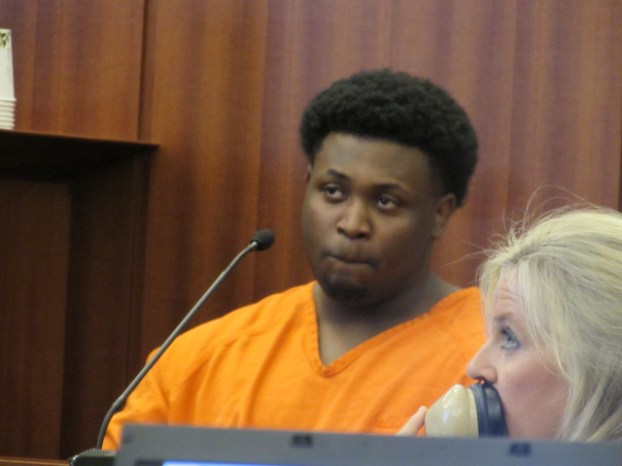 LaGrange Police Detective Jason Duncan testifies he was able to use surveillance footage from the Hot Spot convenience store to come up with a description of the suspects during the trial of accused robber Rashaad Garrett in Troup County Superior Court on Wednesday.

http://lagrangenews.com/wp-content/uploads/sites/37/2016/03/web1_Trial4.jpgLaGrange Police Detective Jason Duncan testifies he was able to use surveillance footage from the Hot Spot convenience store to come up with a description of the suspects during the trial of accused robber Rashaad Garrett in Troup County Superior Court on Wednesday.

LaGRANGE — The state’s key witness took the stand first thing in Troup County Superior Court on Tuesday morning to testify in the case against a man accused of beating and robbing a group of men.

Witness Terry Cameron was Rashaad Garrett’s alleged accomplice in the theft of a purse and robbery of the Hot Spot convenience store at 523 S. Greenwood St. on two different dates in 2014. Cameron said he helped beat and rob three Hispanic males at two homes on separate occasions on South Greenwood Street, and he attempted to break into a home where at least four Hispanic males were sleeping in the 600 block of Vernon Street in fall 2014.

Cameron pleaded guilty to the charges in August and was sentenced to 10 years to serve five in prison. He is currently incarcerated in another county.

Cameron told the court Garrett was a part of each crime.

He also said the weapon he and Garrett used in some of the robberies was actually a BB gun.

According to Cameron, Garrett told him to rob the business and the men started planning the heist two to three days before the crime. After, the two went to another location, changed clothes, counted the money they stole and split it evenly between them.

Cameron testified he was arrested shortly after the Hot Spot robbery and told LaGrange Police Detective Jason Duncan about the incident.

“What made you do that? Were you promised anything,” Himes asked him.

“No,” Cameron replied. “I guess I just felt guilty.”

Ham testified members usually increase their status within a gang by committing crimes, and some like to brag about their “accomplishments” to others on social media.

Ham stated the Internet, specifically Facebook, was how he caught on to Garrett, an alleged member of the Piru set of the Bloods criminal street gang in LaGrange.

The gang analyst explained once he obtained a search warrant, he could then subpoena and receive copies of every message, post and photo sent or received to Garrett’s Facebook page. Each one stamped with the day and time it was uploaded.

Powers had Ham go through some of the Garrett’s Facebook pages.

Ham explained what certain slang words meant, especially for someone belonging to the Bloods, and different hand signs shown in photos.

But there were three photos in particular on Garrett’s Facebook page that Powers believed were significant: An up close picture of a weapon, a photo of a LaGrange Daily News article about a Hispanic man beaten and robbed outside his home on South Greenwood Street and a picture of a hand holding a large wad of cash.

Powers asked Ham why the pictures were important to the case against Garrett.

” … Each of the weapons photos posted in Sept. 2014, that’s the time frame, give or take, of the crimes taking place in the South Greenwood Street corridor that we were investigating,” Ham told the jury. “… Oct. 15, 2014, is important because a man was robbed in broad daylight and that’s when the picture of the newspaper article was uploaded as well.”

The gang analyst also explained Hot Spot was robbed about 7 a.m. on Nov. 7, 2014. The picture of someone holding a large sum of cash was first uploaded to Garrett’s Facebook page later that night about 8:53 p.m., stated Ham.

But Garrett’s defense lawyer, Julianne Lynn, was not buying Ham’s theory about her client being in a gang or committing any crimes.

“If I take a picture with a gun does that make me a gang member,” she asked him. ” … If I flash the letter W with my hand in a photo, you don’t know what that means, right?”

“No, as an individual sign, you’re absolutely right,” Ham said.

“So the bottom line is we don’t know what these pictures mean. You’re just making an assumption on my client is a member of a gang,” Lynn fired back.

“No. It’s the totality of everything,” he stated firmly. “The hand signs, the slang, the purposeful misspellings, the bragging on social media …”

He was the first detective on the scene at the armed robbery and beating of two Hispanic men outside a home in the 600 block of South Greenwood Street on Sept. 24, 2014. He also investigated the robbery at Hot Spot.

Duncan explained once Terry Cameron was arrested, he began to shed some light on the recent robberies. Cameron admitted committing them and provided details about the crimes that were not released publicly, like the use of the BB gun.

Himes showed the Detective the photo posted to Garrett’s Facebook page of someone holding a gun.

“I could see the serial number on the weapon,” Duncan explained to the jury. “The number comes back to a replica of a BB gun … the one in that photo is in fact a BB gun.”

“But looking at the gun or the handle of the weapon, would a person know that?” Himes asked him.

“No. Just looking at the gun it looks like a semi-automatic handgun,” he replied.

Duncan also testified the convenience store surveillance footage on the night of the purse theft and the day of the robbery helped him determine the crimes were committed by the same people.

“I noticed in the video (of a purse theft) he (allegedly Garrett) has on a Gilligan or boonie style hat … he was walking, almost crawling to stay out of view, and that’s when I noticed the sole of his shoe is red,” Duncan explained while the surveillance video was played for the jury. “Right where he gets the purse is where the money bucket was and was taken during the robbery in the store a few weeks later. In that robbery, it’s almost like the person knew exactly where to go and where to find it.”

The surveillance video during the second robbery was played for the jury as well. Duncan pointed out the suspect that catapulted over the counter is wearing the exact same style hat and red-soled shoes as the person in the first robbery.

After the testimony wrapped up, Garrett’s defense attorney made a motion for an acquittal to presiding Superior Court Judge Emory Palmer.

Lynn stated that except for Cameron, none of the other victims had been able to identify her client as a suspect in any of the crimes.