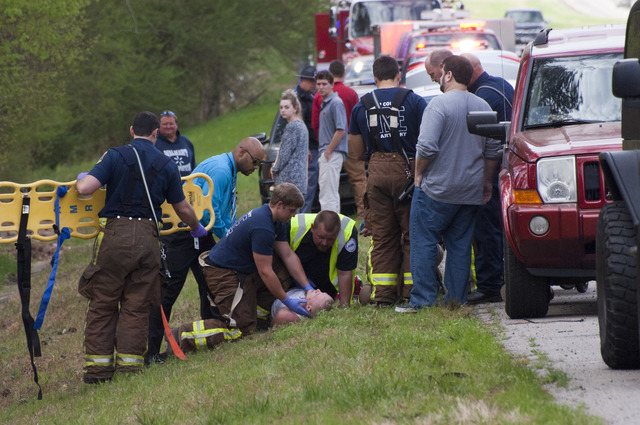 Zach Cato, 25, of LaGrange, helped subdue a fugitive Thursday who allegedly caused a car wreck on Interstate 85 in an attempt to flee.

http://lagrangenews.com/wp-content/uploads/sites/37/2016/03/web1_Captured02WEB-1.jpgZach Cato, 25, of LaGrange, helped subdue a fugitive Thursday who allegedly caused a car wreck on Interstate 85 in an attempt to flee.

Troup County firefighters tend to a handcuffed Brandon L. Stroud, on the ground, Thursday after he allegedly caused a car wreck on Interstate 85 in an attempt to flee bail bondsmen who were bringing him to the Troup County Jail. A bystander helped subdue Stroud.

http://lagrangenews.com/wp-content/uploads/sites/37/2016/03/web1_Captured01WEB-1.jpgTroup County firefighters tend to a handcuffed Brandon L. Stroud, on the ground, Thursday after he allegedly caused a car wreck on Interstate 85 in an attempt to flee bail bondsmen who were bringing him to the Troup County Jail. A bystander helped subdue Stroud.

WEST POINT — A bail bondsman and a fugitive were injured, and a man’s friends hailed him as a hero after he subdued the fugitive following a wreck on Interstate 85 on Thursday.

Two bondsman were bringing alleged escapee Brandon L. Stroud, 21, of LaGrange, back to the Troup County Jail on charges of escape and obstruction after capturing him in Lanett, Alabama. While traveling to the jail, Stroud, handcuffed, supposedly grabbed the wheel of a Ford sedan and wrecked it about a mile north of exit 6.

The car careened into the woods about 11:30 a.m. next to the northbound lane and injured the driver, bondsman Ruben Hairston of Moore Bonding Company in LaGrange, along with Stroud. A second bondsman, Gregg McElroy, also of Moore Bonding, was stunned but uninjured.

Zach Cato, 25, of LaGrange, along with his co-worker from Blackwell Incorporated, Chris Cowell, witnessed the wreck on their way from West Point to LaGrange and stopped to help.

After approaching the car, Cato said he and Cowell helped Hairston out of the vehicle as Stroud climbed from the passenger seat into the rear and leapt out of the car, still handcuffed, and ran toward the interstate.

“He was bellyaching and hollering, then he just jumped up and ran,” Cato said. “We knew what he was doing — he was trying to get away. Not today.”

Cato said he grabbed a stick and chased after Stroud, who ran north about 100 yards parallel to the interstate and opened the door of a Jeep that had stopped. Cato used the stick to hit Stroud in the back of the head.

Stroud fell to the ground and Cato wrestled him to keep him from fleeing again. Meanwhile, another man who identified himself as a U.S. Border Patrol agent traveling from Laredo, Texas, to Myrtle Beach, South Carolina, on vacation said he saw the tussle and stopped to call 911.

The second bondsman, McElroy, caught up to the melee and helped keep Stroud in custody as law enforcement and emergency workers responded to the chaotic scene.

“Ruben was sore and hurting, but he followed, too, but the other two guys caught him. It’s pretty freakin’ awesome,” McElroy said. “The worst part about it, I broke my glasses.”

Hairston and Stroud were both taken by ambulance to West Georgia Medical Center. Both men were admitted to the emergency department and were in stable condition at the time of this report, according to Patricia Rogers, a spokesperson for West Georgia Health.

Stroud was wanted on failure to appear warrants with both the City of LaGrange Municipal Court and the Troup County State Court, according to Jeanette Moore, owner of Moore Bonding. One of Stroud’s cases involved a 2013 incident where he allegedly escaped from the Troup County Work Release program, she said.

It is unclear if Stroud will face additional charges.

McElroy expressed his gratitude to Cato and Cowell, along with the Troup County Sheriff’s Office and Fire Department, Georgia State Patrol and American Medical Response, all of which responded to the crash.

“They were fast and fantastic,” he said.