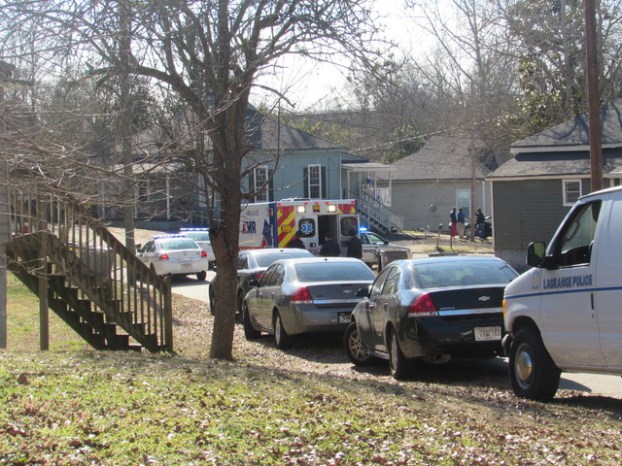 Officers and medical personnel line McGee Street on Feb. 13, 2015, after Marcell Cotton was shot six times in the legs inside a house. Marquavis Parks pleaded guilty Thursday to luring Cotton to the home and beating him.

http://lagrangenews.com/wp-content/uploads/sites/37/2016/03/web1_McGheeStShooting-003.jpgOfficers and medical personnel line McGee Street on Feb. 13, 2015, after Marcell Cotton was shot six times in the legs inside a house. Marquavis Parks pleaded guilty Thursday to luring Cotton to the home and beating him.

LaGRANGE — A gang member accused of helping lure a man to a drug house and beating him pleaded guilty to some of the charges against him Thursday afternoon in Troup County Superior Court.

Marquavis Adunise Parks, 19, aka “Psycho,” was charged with aggravated battery, aggravated assault, felony battery, possession of a firearm during the commission of a crime and two counts of the Georgia Street Gang Terrorism Prevention Act.

Parks pleaded guilty in his best interest to the charges of battery and one count of violating the Street Gang and Prevention Act.

According to Troup County prosecutor Brett Adams, the rest of the charges against Parks were “nolle prossed” — will no longer be pursued — in return for the man testifying truthfully.

Parks called Marcell Cotton to a known drug house in the 100 block of McGee Street on Feb. 13, 2015. That is where Parks and other gang members accused the victim of stealing drugs from them, Adams stated.

The group then beat Cotton and shot him six times, Adams said.

LaGrange police in February 2015 told the Daily News Cotton was shot in the legs and was airlifted to Grady Hospital in Atlanta for treatment.

“They were sending a message to the community that anyone who messes with the Gangster Disciples and their drugs will be dealt with,” Adams stated. ” … Gangs are starting to become a crisis in our area … they do not care about the law. They are out there to do what they want to do.”

The prosecutor then asked Parks if he was the one who shot Cotton in the house on McGee Street.

Palmer accepted the plea. He sentenced Parks to 15 years to serve two years in prison with the balance to be probated on the charge of violation of the street gang terrorism and prevention act and 12 months in jail for the charge of felony battery.

It is a net sentence of three years behind bars and 13 years on probation for Parks.