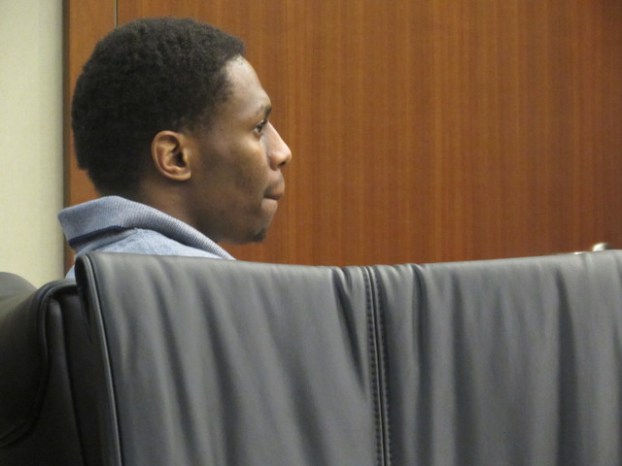 Rashaad Quantez Garrett, 22, sits quietly at the defense table while his attorney approaches the judge’s bench Thursday in Troup County Superior Court. A jury found Garrett guilty on two counts of robbery and violation of the street gang terrorism and prevention act.

http://lagrangenews.com/wp-content/uploads/sites/37/2016/03/web1_Garrett2.jpgRashaad Quantez Garrett, 22, sits quietly at the defense table while his attorney approaches the judge’s bench Thursday in Troup County Superior Court. A jury found Garrett guilty on two counts of robbery and violation of the street gang terrorism and prevention act.

LaGRANGE — A 22-year-old man was convicted on three out of seven charges against him Thursday afternoon in a Troup County Superior Courtroom and received a hefty prison sentence for his crimes.

A jury found Rashaad Quantez Garrett guilty on two counts of robbery and for violation of the street gang terrorism and prevention act.

Palmer then declared a mistrial on the remaining counts against Garrett.

The judge wasted no time, immediately sentencing the 22 year old for the robbery and gang charges, plus a theft charge Garrett pleaded guilty separately.

It was a net sentence of 55 years behind bars for Garrett, who was immediately taken into custody by Troup County Sheriff’s deputies as his family and friends cried out in shock and disbelief in the courtroom.

Garrett looked stunned by the sentence and was only able to glance at his family before being whisked away by deputies into a back room.

Troup County Assistant District Attorney Melissa Himes revealed to the court before sentencing that Garrett had a juvenile record. She said in 2010, he was arrested on charges of aggravated assault and possession of a weapon during the commission of a crime.

According to Himes, during that incident, Garrett was accused of committing an armed robbery against a Hispanic male just a block away from South Greenwood Street, where the 2014 robberies occurred.

Himes also stated through prior testimony and the defendant’s Facebook page, it seemed clear Garrett was proud of being a Bloods gang member and bragging about his criminal behavior online.

She told Judge Palmer she felt it was time to send a message those type of actions will not be tolerated in the community any longer.

“… We don’t have a gang problem. We have a gang crisis,” Himes stated. “Young men are terrorizing our community … this particular situation, he steals from a woman he sees every day (a convenience store owner). The money they work hard for every day, he thinks he can come in and just take it and have no consequences for his actions.

“He was so bold as to post a newspaper article about a man being robbed in broad daylight on his Facebook page,” she continued. “There’s no remorse there … he is sitting there, declining to take responsibility for his actions. This is unacceptable. The community will be a safer place because he is off the streets for a long time.”

But Garrett’s defense lawyer, Julianne Lynn, reminded Palmer that the jury remained hopelessly deadlocked on several of the charges.

“Judge, my client wasn’t convicted of beating anybody,” she said. “He has zero adult criminal history. He’s 22 years old now … so I ask that he also be eligible for first offender status.”

Palmer seemed to side with the state when he handed down Garrett’s 55-year sentence.

Garrett and his attorney have 30 days to file an appeal.