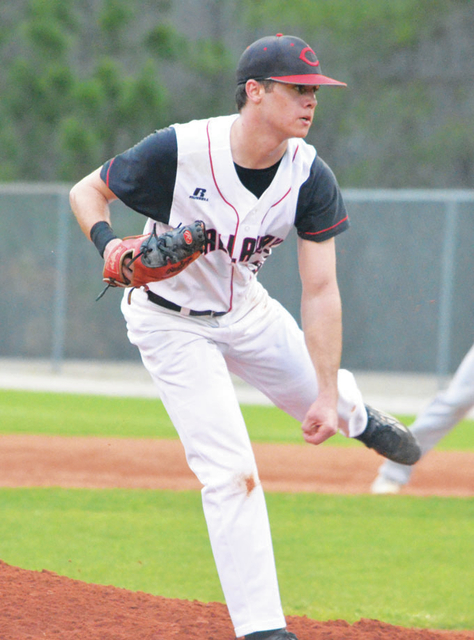 Troup’s Colby Bridwell takes a swing during Wednesday’s game against Carrollton. Those two teams will play the final game of their three-game series today in Carrollton. Kevin Eckleberry | Daily News

http://lagrangenews.com/wp-content/uploads/sites/37/2016/03/web1_troup-colby-bridwell.jpgTroup’s Colby Bridwell takes a swing during Wednesday’s game against Carrollton. Those two teams will play the final game of their three-game series today in Carrollton. Kevin Eckleberry | Daily News

Callaway’s Dylan Johnson will start one of the games in today’s doubleheader against Central-Carroll. Kevin Eckleberry | Daily News

http://lagrangenews.com/wp-content/uploads/sites/37/2016/03/web1_CHS-johnson-1.jpgCallaway’s Dylan Johnson will start one of the games in today’s doubleheader against Central-Carroll. Kevin Eckleberry | Daily News

LAGRANGE – The Troup Tigers and Carrollton Trojans will play the rubber match of their three-game series a day later than originally anticipated.

Troup and Carrollton were supposed to play on Thursday, but the game was postponed because of rain, and they’ll play instead today, weather permitting.

Carrollton, which evened the series with an 8-5 win at Troup on Tuesday, will host today’s game at 5:30 p.m.

Troup won the series opener 12-9 on Tuesday, and it would improve to 5-1 in Region 5-AAAA with a win today.

The LaGrange Grangers were able to hit the field on Thursday for their road game against the Carver Tigers, and they were leading 11-1 in the fourth inning when play was suspended because of rain.

The game never resumed, and unfortunately for Grangers, it was not an official game.

LaGrange and Carver will play a doubleheader today at Granger Park, with the first game set to get under way at 4:30 p.m.

If field conditions permit, Callaway will play a regularly scheduled doubleheader at Central-Carroll today at 4:45 p.m.

The Troup Tigers brought a 4-0 region record into Wednesday’s game, and they rallied for three runs in the bottom of the sixth to tie it, keeping their hopes of staying unbeaten in the region alive.

The day belonged to the Trojans, though.

Carrollton broke the tie with three runs in the top of the eighth, and Troup brought the tying run to the plate in the bottom of the inning but was unable to score.

With the rainout, Troup and Carrollton will both likely have all of their pitchers available today.

For Troup, that means senior Winston Turner could pitch if needed.

Turner pitched six innings on Tuesday, and he has been the winning pitcher in six of the Tigers’ nine wins this season.

Callaway improved to 3-1 in Region 5-AAA with Tuesday’s 12-8 home win over Central-Carroll.

Johnson has struggled at times with his control this season, but when he’s been on, he’s been tough to hit.

In his best outing of the season, Johnson pitched a complete game in a 4-2 win over Shaw.

“I think he’ll go out and give us a chance to win,” Hubbard said. “If he throws the ball over the plate, whoever he’s pitching against, we feel we’ve got a great chance to win.”

Central-Carroll, which is in desperate need of a win after dropping its first four region games, will send its ace, Nic Dye, to the hill in one of today’s games.

LaGrange was cruising to its second straight region win on Thursday when play was stopped.

The Grangers improved to 2-4 in Region 1-AAAAA with Tuesday’s dramatic come-from-behind 3-2 win over Hardaway, and that snapped a three-game skid in region play.

LaGrange trailed 2-1 when it tied it with a run in the bottom of the seventh, and it won it an inning later on a Willis Kemp RBI single with the bases loaded.

If LaGrange can win both games today, it would even its region record at 4-4 with 10 region games remaining.