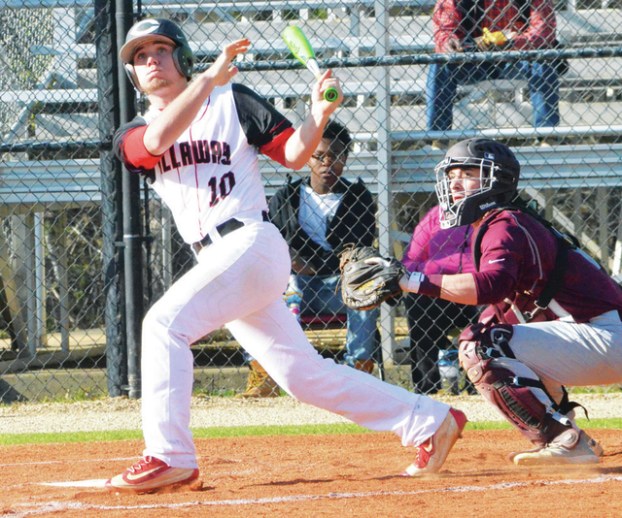 LAGRANGE – They only have one game this week, but it’s a big one.

After finishing off a perfect week with a doubleheader sweep of Carver on Friday, the LaGrange Grangers have evened their Region 1-AAAAA record at 4-4.

LaGrange’s lone game this week will be against Harris County on Tuesday, and it will be a critical region showdown.

Harris County comes into the game with a 5-2 region record, and it is just one game behind first-place Columbus.

Also this week, Callaway will play a three-game Region 5-AAA series against Rockmart.

Those two teams will play a single game at Rockmart on Tuesday, and a doubleheader at Callaway on Friday.

The Troup Tigers will take a break from their Region 5-AAAA schedule this week as they head to Bradenton, Fla. to participate in the IMG National Classic.

LaGrange, after rallying to beat Hardaway 3-2 in eight innings on Wednesday, swept Carver 14-1 and 10-0 on Friday.

The Grangers were 1-4 in the region after losing three in a row, but they’ve climbed back to .500 in the region, and a win on Tuesday would enhance their playoff hopes and extend their win streak to four.

Only four teams from Region 1-AAAAA will make the state playoffs, and LaGrange is tied with Hardaway for fourth place at 4-4.

A win on Tuesday means LaGrange will be, at worst, still tied for fourth place.

“We’ve got a big game Tuesday,” said Cole Freeman, who pitched a six-inning shutout in Friday’s second game against Carver. “We’ve got to come back and win that one.”

Callaway is 4-2 in Region 5-AAA after taking two-of-three from Central-Carroll last week, while Rockmart is 2-4 in region play.

The Cavaliers are in good shape as far as making it to state, but they’re two games behind the Cedartown Bulldogs, who have swept both of their region series so far to move to 6-0.

Callaway and Cedartown will play three times in the final week of the regular season.

Troup is tied for first place in Region 5-AAAA with Whitewater at 5-1, and those two teams appear headed for a region-championship showdown in the final week of the regular season.

A year ago, Whitewater took two-of-three from Troup to win the region title.

Troup, after playing four games in Florida this week, will return to region play on April 5 with a game at Sandy Creek.

It’s a region sweep for Grangers